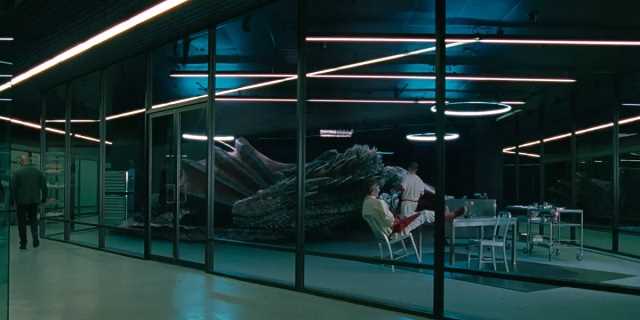 Westworld’s convoluted nature has pretty much driven me away from the show, but I hung around to give it one more shot. And with this episode, not only does it get more complex, but somehow manages to throw in multiple references to other films (Futureworld, Jurassic Park), but it also confirms a connection to HBO’s other groundbreaking series, Game of Thrones.

Episode 2 of Westworld season 3 jumped all the way down the rabbit hole with one Easter Egg after another. It begins with Stubbs and Bernard making their way through Delos and coming upon the existence of Medievalworld, which was a park in the 1976 movie Futureword, the sequel to Michael Crichton’s original 1973 movie Westworld.

The most obvious reference comes as a pair of techs are seen in the Medievalworld labs. The techs are played by Game of Thrones showrunners D.B. Weiss and David Benioff, who are talking about selling off a Medievalworld attraction to a new company in Costa Rica. When the camera pans over, we see a big scaly dragon that is very clearly Drogon, last seen flying off with a dead Dany in the Game of Thrones series finale. They then proceed to chop the poor dragon up, which might entertain some folks who hated the way that show ended.

As for the Jurassic Park thing, it’s subtle and maybe a stretch. The Costa Rican company the techs plan to sell the dragon to? Might the place be Isla Nublar, the Costan Rican island home to John Hammond’s Jurassic Park? The original Jurassic Park novels were written after all by…Michael Crichton.

If Westworld has taught us anything it’s to not believe in coincidences. So I guess this means Game of Thrones was always just another area of the park in Westworld, which I think is the perfect level of weirdness to add to this show.