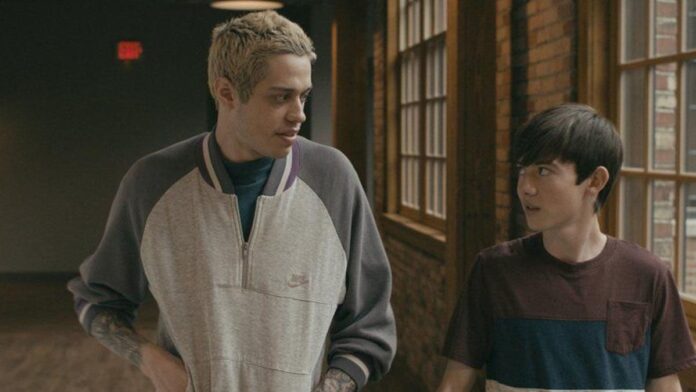 Debuting at Sundance in 2019,  Big Time Adolescence was the kind of familiar, plucky coming-of-age story the festival trafficks in pretty regularly. What made it stand out from the rest, and thus draw a ton of attention and one of the biggest acquisition buys that year, was the presence of SNL funnyman Pete Davidson in a role that many said showed his wider scope as an actor. I’m not sure that’s necessarily true; Davidson is excellent in a flashy, slacker role, but it’s also right in his bread and butter. The film succeeds well enough on its own thanks to writer/director Jason Orley and the presence of its real star, Griffin Gluck.

While surely no gamechanger, Big Time Adolescence hits all of the right emotional notes, and has the guts to portray Davidson’s character, Zeke, for what he is:  rather pathetic. Zeke is in his 20s but he dresses and acts like someone still figuring himself out in high school. He was the man back then, and now everybody else around him has grown up and moved on. But Zeke is still a clown, who works a crappy dead-end-job and pines for his ex-girlfriend Kate (Emily Arlook) who happens to be the older sister of 16-year-old Mo (Gluck), his new best pal. Zeke did all of the things for Mo that an older brother would, like show him his first nudie mag and take him to R-rated movies, and now they’re inseparable. But Mo has real potential, everybody recognizes it, and Zeke can only hold him back.

Most of the film sets up this scenario where Zeke is basically living vicariously through Mo, which means the latter isn’t doing much for himself. When Mo gets invited to a party where drugs and alcohol are needed, it’s Zeke who turns the kid into his own personal drug mule. When Mo meets the perfect girl, the undeniably cool and wise-beyond-her-years Sophie (Oona Laurence, terrific), Zeke’s terrible advice (“ghost her”) is a constant roadblock. Meanwhile, Mo sister and parents (Jon Cryer and Julia Murney) are well aware of what makes Zeke so attractive to a kid, and why he’s everything that needs to be avoided.

Orley makes the best possible use of Davidson’s sophomoric brand of humor, which, like Zeke, is an acquired taste that can be tolerated only for so long. He’s not unsympathetic, in fact, Zeke is quite lovable in his own way and Orley makes it clear that people don’t hate the guy. They just know he isn’t going anywhere and doesn’t want to see others dragged down by him. But Davidson, with the help of Orley’s script, makes you wonder whether Zeke is fully aware of his situation and is either unable or unwilling to change. Throughout it all, he shows ultimate loyalty to Mo even when his young kid arguably doesn’t deserve it.

While Davidson is good and will get the bulk of the headlines, it’s Gluck’s confident performance that truly stands out. His charisma overshadows Davidson’s, and we understand why all in the women in the film are more drawn to Mo, who is significantly younger than Zeke but carries himself in a maturer way.

It’s tough to ignore that Big Time Adolescence refuses to address the creepiness of an older man’s attachment to a teenage kid. But to go down that route takes the story, which is genuinely funny and heartfelt, into darker territory than it needs to go.