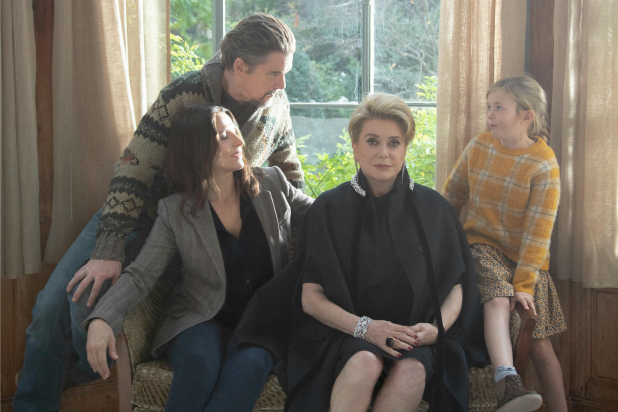 For the first time ever, I came away from a Middleburg Film Festival without seeing the latest from my favorite director, Hirokazu Koreeda. The Truth played there a couple of months ago, but I couldn’t fit its one screening into my packed schedule. The wait to see it has been interminable, and there’s still a few months left to go. But at least a new trailer is here to ease the suffering just a little.

Koreeda’s first movie outside of his native Japan, The Truth stars French legend Catherine Deneuve, Juliette Binoche, Ludivine Sagnier, and Ethan Hawke. It centers on the tense relationship between a French actress and her screenwriter daughter, made worse by the publishing of the mother’s memoir.

Families put under unique strain has always been Koreeda’s favored subject. He won the Palme d’Or last year for Shoplifters, and directed other critically-acclaimed dramas After the Storm, Like Father Like Son, Nobody Knows, and Our Little Sister.

SYNOPSIS: Fabienne is a star of French cinema. She reigns amongst men who love and admire her. When she publishes her memoirs, her daughter Lumir returns from New York to Paris with her husband and young child. The reunion between mother and daughter will quickly turn to confrontation: truths will be told, accounts settled, loves and resentments confessed.