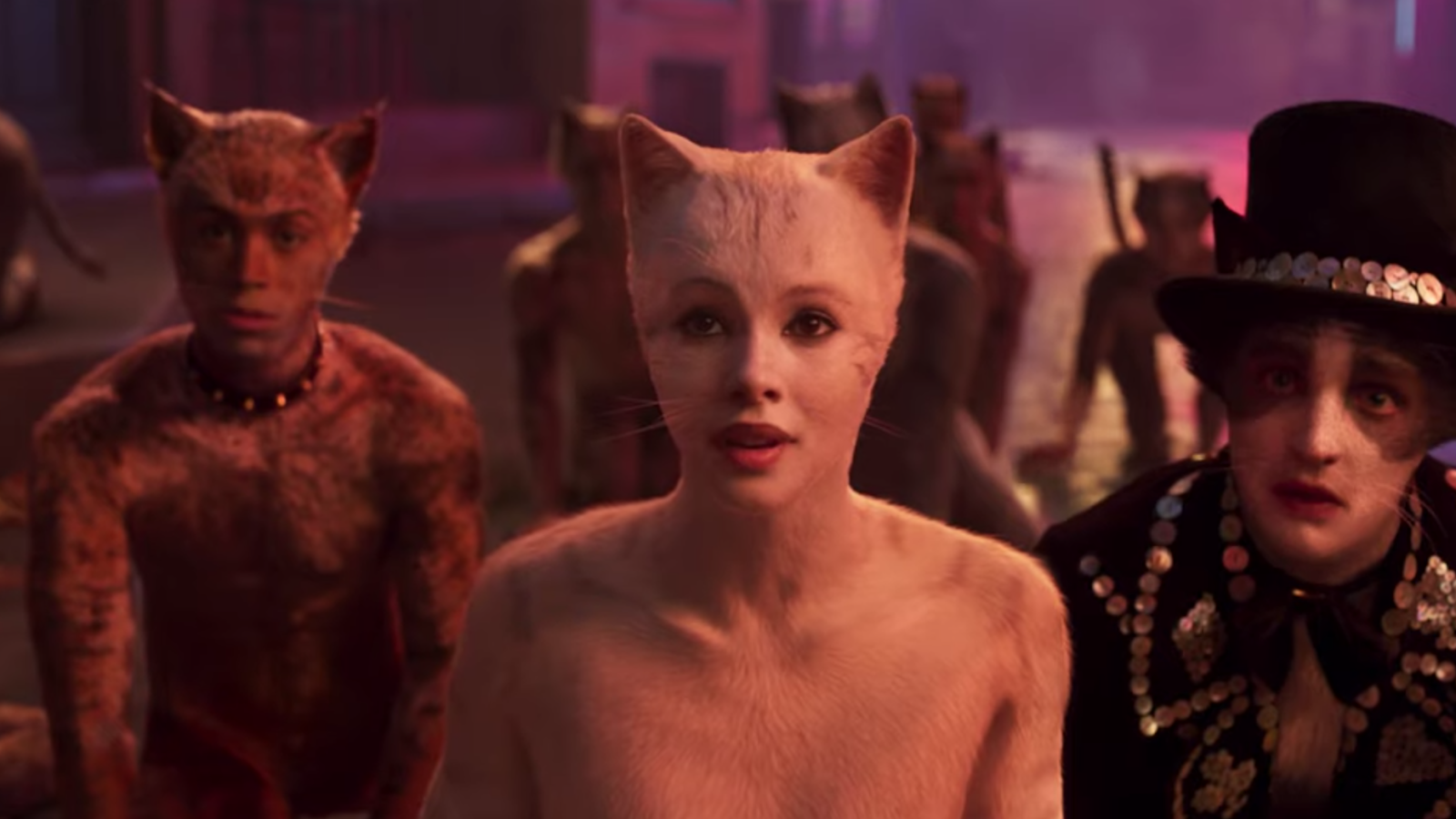 Going into Cats having endured a couple of bizzarro trailers, I thought maybe it would’ve been smart to drop some acid, or at least go in drunk. I did neither.  The good news is that after watching this goopy hairball of a film by supposedly-great director Tom Hooper (I’ve yet to see any evidence of this), I feel like somebody sprinkled acid onto my hot dog.

What I won’t do, aside from the mention of a hairball, is drop a bunch of clever feline puns on you. There are undoubtedly a few hundred reviews from critics who think they’ve come up with some seriously funny cat puns. Some of them might be right, most of them are definitely wrong. You don’t need me to try and be funny.

This movie is bad. It’s a true howler, and makes me wonder how in the world Cats was one Broadway’s most successful and long-running shows. Is everybody who watched it high? Coming out of it, I told my friend I still had no idea what the fuck Cats is about. That wasn’t exactly true. The plot of Cats has been known to me for years, but having never seen the stage version, watching it try to play out on screen makes you question everything. In a slight deviation from the familiar “story”, a stray cat named Victoria (newcomer and ballet dancer Francesca Hayward) is literally dumped into the orbit of the Jellicle cats. What’s a Jellicle cat? You got me. The entire plot of the movie consists of this band of misfit felines singing and dancing to explain who they are. They don’t do a very good job of it. Apparently, Victoria has stumbled onto the day of the Jellicle Ball, when Old Deuteronomy (Judi Dench, who enters looking slightly bewildered) will select a deserving member of their order to ascend to the Heaviside Layer and be reborn.

Yeah, makes no sense to me, either.

But there’s also an evil dude, a gangster cat named Macavity (an unfortunate Idris Elba), with strange magical powers (???), and a trench coat to hide that he’s super naked underneath it. Like a flasher. He’s the flasher Jellicle? He wants to ascend for some reason, and will make all of his competition literally vanish in order to win. We don’t really know why he wants to go, or why he (and one other cat) have magical powers. We don’t know much of anything, which makes it really annoying that the entire movie is an attempt to explain the unexplainable.  I can only gather the stageplay is similarly incomprehensible. Perhaps that’s why people love it?

Other cats put on weird display are the timid illusionist Mr. Mistoffelees (Laurie Davidson), the formerly glamorous Grizabella (Jennifer Hudson) now seeking redemption, the bubbly Jennyanydots (Rebel Wilson, really not in her comfort zone), the flirty Rum Tum Tugger (a randy Jason Derulo), and many more. There are notable, occasionally fun, performances by James Corden, Ian McKellen, and more, with Taylor Swift’s jazzy, sexy Chicago-style rendition of “Macavity: The Mystery Cat” a true standout. Overall, however, there aren’t any songs that are memorable, and that sadly includes Hudson’s centerpiece “Memories”. It’s not really through any fault of hers, though. Mainly it has to do with the poor way in which it was shot, with so many strange close-ups you wonder what Hooper was seeing that you don’t.

Hooper has plenty of experience adapting huge musicals for the big screen, with many celebrating his 2012 version of Les Miserables. I found that film to be les miserable as Hell, but the songs are so great (despite Russell Crowe’s best efforts) that it was easy to overlook Hooper’s deficiencies, all of which are repeated with Cats. When you’re dealing with a film that relies so heavily on precise movements, getting the right angle is paramount. We’re talking multiple dance numbers with dozens of characters littered about every inch of the screen, and yet Hooper dives in for one extreme close-up after another. The editing is so haphazard that we barely get a sense of what is happening. Hayward, a ballerina of some renown, has beautifully graceful movements that largely go to waste because Hooper can’t be bothered to hang on a shot for more than a moment. And when he does, the perspective is often wildly out of sync. The cats shift from human size to normal pet size, their surroundings sometimes accompanying them and sometimes not.

But worst of all are the CGI fur costumes, and VFX that look so cheap it’s distracting. Maybe it was what Hooper and his effects team were going for, I don’t know why it would be the case, but the cast resemble mutant cat/human hybrids that just escaped from the Weapon X lab. The characters all retain the actors’ human faces, which would be fine if they didn’t look like they had been shakily mapped-on using old video game technology. When the cats are still, which is rare, this isn’t a problem. During the bigger numbers with a lot of specific movements you can really see how poor of a job was done. And to make it all somehow worse, all of these cats are so damned horny! You’ll never forget the sight of Dame Judi Dench, bundled up to her neck in white fur, smiling amorously to a decrepit Ian McKellen, her legs and tail waving suggestively in the air.  *shudders*

I’ll give Cats this, though; it’s definitely not dull. The cast are fully-committed to their roles, and there’s a campiness that will make this studio-sized spectacle a sing-a-long favorite at midnight screenings. It’s got a real Rocky Horror quality to it, and that extends to the technicolor landscapes, where these cat/human things prance along railways and march through kitchens singing about a whole lot of nothing. But I suspect it’s the unfathomable quality that has drawn people to Cats for so long. In that, at least, I will give Tom Hooper credit. He’s definitely captured that with his film and it may prove to be catnip (Ok, last one) for the musical’s most devoted fans.