The conclusion of last week’s episode served to remind us, through an assassin’s crosshairs, that Mando and Baby Yoda are constantly under threat. And so, this week’s episode of The Mandalorian, titled “The Gunslinger”, kicks off exactly where it should, with an deep space dogfight between Mando and an over-eager bounty hunter. It’s a hot start for the show after the previous story kinda dragged along, and gives us a chance to check out our hero’s piloting skills. The Razor Crest does take its share of blaster fire, however, from the predator’s sleek ship, possibly of Naboo design? Hmmm….anyway, some trickery by Mando gets the jump on him, blowing away his opponent with relative ease. But the ship is damaged enough that they need to stop somewhere for repairs, and guess where they are going to get them?

Yep, that Tatooine. Where this whole thing called Star Wars began for most of us. The birthplace of some Skywalker guy who might be rising in about two weeks at a theater near you. There is no planet in Star Wars history that fans recognize more than Tatooine, and no wretched hive of scum and villainy more infamous than Mos Eisley. After being hailed by the tower to come on in, Mando lands at a space port where he’s greeted by those pit droids (the ones that clam up into their helmets when scared) we liked the from the Prequels. Mando’s distaste for droids as evident as ever, he’s then welcomed by a mechanic named Peli, played to my great joy by Strangers with Candy‘s Amy Sedaris.  She offers to fix the ship, but it’ll cost more credits than Mando has got on him. So he goes to find the one thing he knows is in plentiful supply on a place like Tatooine, some dirty work that pays big. Which way to Mos Eisley cantina?

Okay, at this point I have to admit this episode is already overflowing with fan service. To some it’ll be a distraction, seeing many of the same familiar images of Tatooine that we saw in The Phantom Menace and A New Hope. To me, it’s wonderful; nostalgic in all the ways I want Star Wars to be. Sure, it comes at the expense of some logic, but I get where writer/director Dave Filoni is coming from. You’ve got Tatooine and Mos Eisley cantina, two of the most recognizable places in all of Star Wars lore, so how can you not use them? Does it make sense that of all the planets in all of the galaxy this is where Mando would end up? Not really. Does it make sense that he’d take Baby Yoda to a place so well-known for being dangerous? Nope. Do I care? Also nope.

Mando walks into the long Greedo-less (“Mclunky!!!”) Mos Eisley cantina, and what does he find? Not a lot. It’s kinda barren, actually, except for the bounty hunter sitting in the corner over there. Sadly, it’s not Han Solo, but young upstart Toro Calican, who looks like someone cloned Bobby Cannavale. That’s because he’s played by Cannavale’s son, Jake. Toro tells Mando about big job he’s got, but it’s outside of the Guild. It involves capturing famed assassin Fennec Shand, played by Agents of SHIELD star and all-around badass Ming-Na Wen. Finally, she arrives. Between her and Gina Carano this series has two of the most awesome, toughest ladies in Hollywood. Love it.  Anyway, Shand’s reputation precedes her and Mando turns the job down. Way too dangerous. But Toro convinces him to take it by appealing to Mando’s surprising sensitivity. Toro’s a newbie just trying to break into the Guild, and has never take on a bounty before. He needs the help, and Mando is the only one who can give it to him. Well, gosh darn when you put it that way! 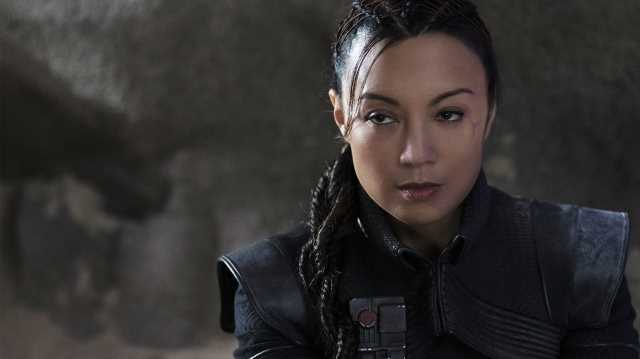 A thread that I think is being established is Mando’s blind spot for the defenseless and the inexperienced. It’s brought him a lot of trouble up to this point, and is about to again. Speaking of which, if you’re wondering where Baby Yoda is all of this time, the little womprat is back at the ship being watched over by Peli like a babysitter, and she’s gonna charge for it. Part of me hopes for an Adventures in Babysitting-esque spinoff episode of what Peli had to go through watching the Child. Did it levitate her droids? Help out with the repairs? Begin a new Jedi Order? I just want to know. Maybe in the Bluray special features?

After securing a pair of swoop bikes, Toro and Mando race across the desert, crossing that familiar Dune Sea, encountering a Bantha and, because no trip through Tatooine would be complete without them, some Tusken Raiders. Mando negotiates with them to cross their territory, making the interesting comment that Tuskens see themselves as the natives, and everyone else as visitors. It’s a good point, and that understanding of their culture is why they don’t just attack the way Tuskens usually do. It’s also worth noting that you can practically see Filoni grinning as he recalls so much classic, gorgeous Star Wars imagery here. Even in the creation of Toro you can see him recalling the roguish Solo, right down to the blaster pistol he carries.

Finally reaching where they believe Shand to be, they instead find a lone, wandering Dewback with someone being dragged behind it. Might it be Shand herself? Going in to investigate, they find that it’s a dead bounty hunter, and Mando realizes too late that it’s a setup. Taking sniper fire straight into his Beskar-plated armor, he barely makes it to cover alive. They decide to wait until night to make their move on Shand, but even in the cover of darkness and the clever use of flares, Mando is shot off his bike and into the sand. Toro gets to Shand just in time to get his ass kicked by her, only for Mando to step in and take advantage of the distraction.  Good work, kid.

With one of the bikes damaged, Mando agrees to go back and find that Dewback to serve as their second transport, but Shand says something interesting first. She mentions that Mandalorians were involved in something big that went down on the planet Navarro, which was weird because you don’t see many of them around at all. It’s at that moment I realized we had no actual idea where those first couple of episodes had taken place. I kinda thought it was Tatooine at first, but now realize she’s referring to Navarro where Baby Yoda was discovered, then rescued by Mando. Anyway, the handcuffed Shand uses this information to convince Toro that he ought to side with her to capture Mando and claim the bounty placed on his head by the Guild, who also want the mysterious Child he stole away with. Playing to the kid’s ego works, but instead of teaming with Shand he instead shoots her in the gut, leaving her for dead.

Does anybody think Ming-Na Wen was brought in for one episode? Come on, nah.

I don’t know why we’d expect a showdown between a Mandalorian and an inexperienced backbencher like Toro to be competitive, but this was pretty ridiculous. Mando returns to his ship to find Peli and Baby Yoda captured at gunpoint, with Toro planning to turn them over and become an instant legend. Capturing a Mandalorian, with a friggin’ Yoda to boot, would be pretty big shit. Instead, Mando easily distracts the stupid kid and shoots him dead. Done and dusted. Peli orders her droids to dispose of the body, with a shout to Beggar’s Canyon as a dumping ground, and that’s pretty much it other than Mando paying off what he owes her for the repairs. 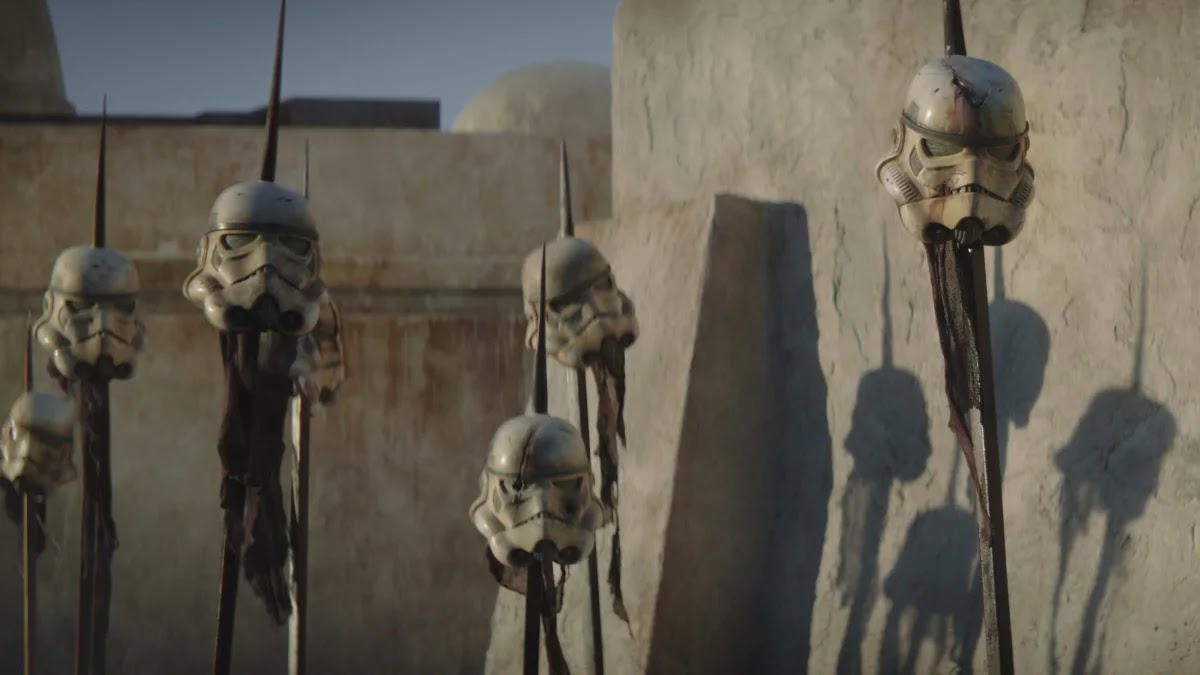 This episode was purely enjoyable and doesn’t do much to stretch the story in any meaningful way. Threads are still dropped, however. Mando and Baby Yoda are earning a reputation big enough that trusting anybody would be foolish, and there’s also the introduction of Fennec Shand who I think has the staying power to be a lasting presence in the Star Wars landscape. I do think that opening space battle was indicative of the wider scope we could be seeing in the season’s final three episodes. We’ve yet to see the introduction of Giancarlo Esposito as Moff Gideon, an Imperial officer affected by the Death Star’s destruction, and episode seven’s proximity to The Rise of Skywalker has given rise to rumors of a potential tie-in aspect.

On a final note, I do think this episode puts to bed any theories of Mando secretly being Boba Fett. At this point in time, Boba is probably still being digested by Sarlacc, right? They’re slowly consumed for millennia, after all.  While it’s possible he escaped, a return to Tatooine and the painful memory of what happened might have come up, or at least sent Mando to check out a different planet.

‘The Mandalorian’ Season 3 Trailer Has SO. MANY. MANDALORIANS! And…Jedi?