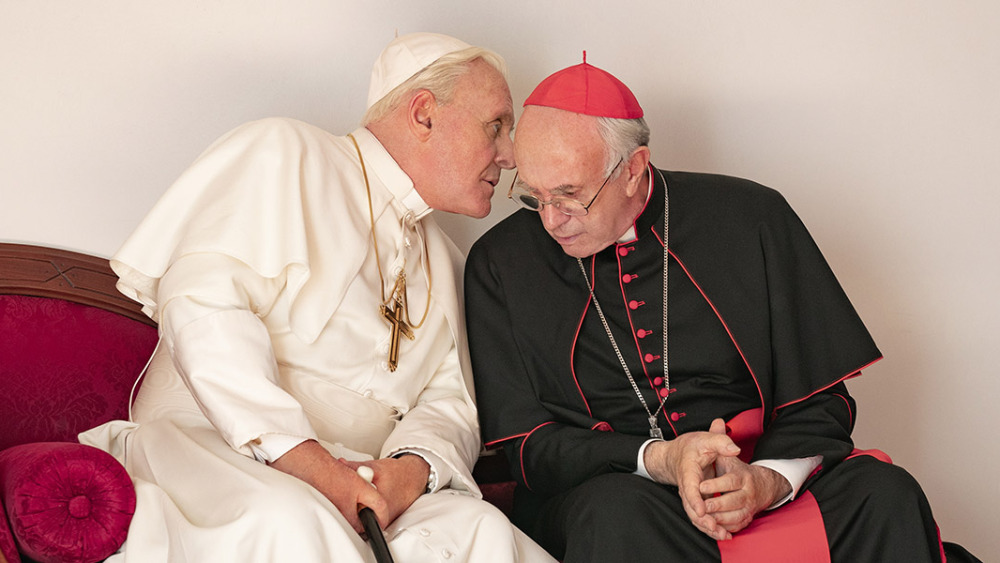 In 2013 we were witness to an incredible moment in history, when the Catholic Church passed its leadership to the “liberal” Pope Francis from the resigning arch-conservative Pope Benedict. Nobody steps down from being Pope. It just doesn’t happen, or at least extremely rarely. Hasn’t happened in hundreds of years. So this was huge, and not a lot is truly known about how it all went down. The Two Popes probably isn’t going to go down as a fact-based account of that monumental event, but it was one of the most surprising pleasures I experienced at this year’s Middleburg Film Festival, and it could be a real contender as this awards season rolls along.

So what does a film like The Two Popes hold for those who don’t practice Catholicism or put much stock in organized religion at all? Turns out quite a lot, actually. Directed by City of God and The Constant Gardener‘s Fernando Meirelles, from a shockingly lively script by the red-hot Anthony McCarten (Bohemian Rhapsody, The Darkest Hour), it’s a film that explores the divide between liberal and conservative values with humor, insight, and no shortage of historical context. But it’s about more than that, as well. Beneath the simple ideological tete-a-tete at the story’s surface is the question whether change can ever be real and everlasting. For not only did the Church need to be moved from the hardline positions it held and embrace reforms to match the 21st-century, but the men instigating that change would also need to evolve. 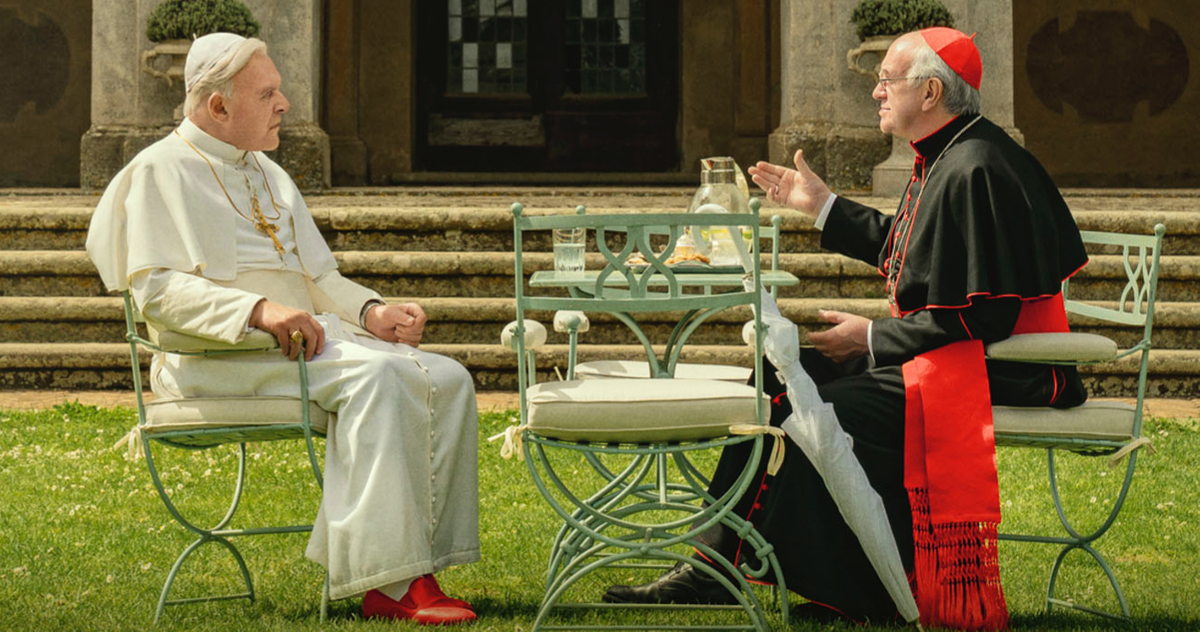 Those still unconvinced the Church’s well-being makes for entertaining moviegoing might want to take heed of its two stars: Anthony Hopkins as Pope Benedict and Jonathan Pryce as Pope Francis. The Two Popes’ greatest gift is being able to watch these two screen legends elevate one another. This is acting on its highest level, refined and perfected over time. Alternately ferocious and delicate, with bruising wit emerging when least expected, Hopkins and Pryce make for an impeccable tag team of holy men.

Despite the title, the film is really about the ascendancy of Pope Francis, who before that was Cardinal Jorge Mario Bergoglio from Argentina. McCarten tries to find a balance in exploring the two men’s differing perspectives, and is relatively successful at it, but it’s clear who he’s more in tuned with. And that proves fine because Pope Francis is the vehicle through which the Catholic Church began a shift towards more progressive values, following a wave of scandals that rocked them and forced Benedict to step down. But before all of that, Francis must reconcile with his past, seen through flashbacks of his time in the 1970s as a simple priest (played with Juan Minujinwho stood by during a brutal military dictatorship in Argentina. The crusty Benedict may not seem like the most sympathetic ear, and often he’s not, but he has his own cross to bear and that binds them together in ways that are unexpected. I do wish we could’ve seen more of Benedict’s troubles, at least some response to the cries of “Nazi” he often faces from the public. 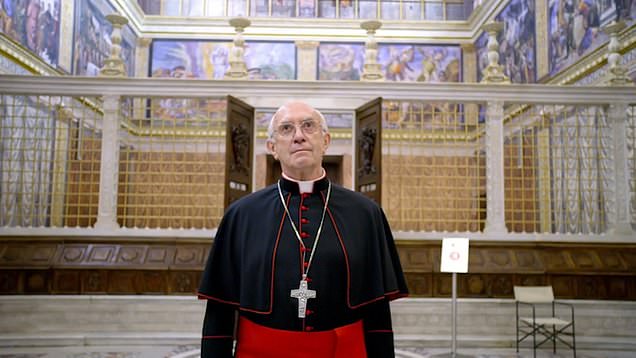 Meirelles’ tones down the stylish direction seen in his previous films, employing one that matches with the acclaimed docudramas that are McCarten’s strength. This does slow things down quite a bit, and neither Hopkins or Pryce is going to beat anybody in a sprint, so there is a little drag to get through. That said, McCarten’s comic timing is spot-on. There aren’t a ton of jokes but they come at just the right moment and paint these two men of God as real people. The worldly Francis is a conundrum to Benedict, whose life has been a sheltered one within the Church. He doesn’t understand it when Francis hums ABBA’s “Dancing Queen”, he doesn’t understand any modern references at all, really. Although he does love cop shows about canine detectives.

Whether there was an actual meeting in Vatican City with Pope Benedict and Pope Francis is unclear, perhaps there was. It doesn’t really matter.  The Two Popes avoids heavy message-making, and steers clear of taking cheapshots at either man. McCarten’s interest isn’t in any of that, but about bringing a little bit of levity and reason to the global discourse by humanizing the men who are meant to be closest to God. If two Popes can find common ground over a slice of pizza or a football game, surely the rest of us can live up to that example?