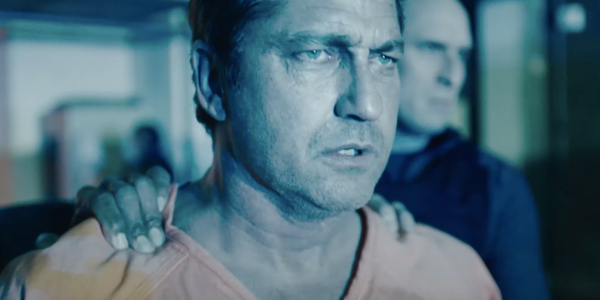 Say what you will about Gerard Butler’s Olympus Has Fallen franchise, because that’s what it is now, a franchise, but these movies make money. Between the original in 2013 and 2016’s sequel London Has Fallen they’ve combined for over $370M, don’t cost a ton of money, and have a cool title ready-made for sequels. You can do these things anywhere. Zimbabwe Has Fallen!! Albuquerque Has Fallen! Well, the third effort takes a slightly different route with Angel Has Fallen, which finds Butler’s character engaging in more mind-numbing action, not in service to the USA, but to clear his own name.

Angel Has Fallen once again follows Secret Service agent Mike Banning, who is framed for an assassination attempt on the President. To prove his innocence, he’ll have to get past the FBI in hopes of finding those truly responsible. Other than Butler, the only returning actor is Morgan Freeman as Alan Trumbull, who is moved up the ranks to become President. Jada Pinkett-Smith joins the cast as an FBI agent tracking Banning, Piper Perabo has replaced Radha Mitchell as Banning’s wife. Other impressive additions include Nick Nolte, Lance Reddick, Tim Blake Nelson, and Danny Huston.

Taking over behind the camera is Ric Roman Waugh, who has done some impressive work in the past on films such as Snitch and Shot Caller.  It’s easy to make fun of these movies but they’ve generally been decent, turn-your-brain-off action flicks and Waugh should at least be able to hit that standard if not surpass it.