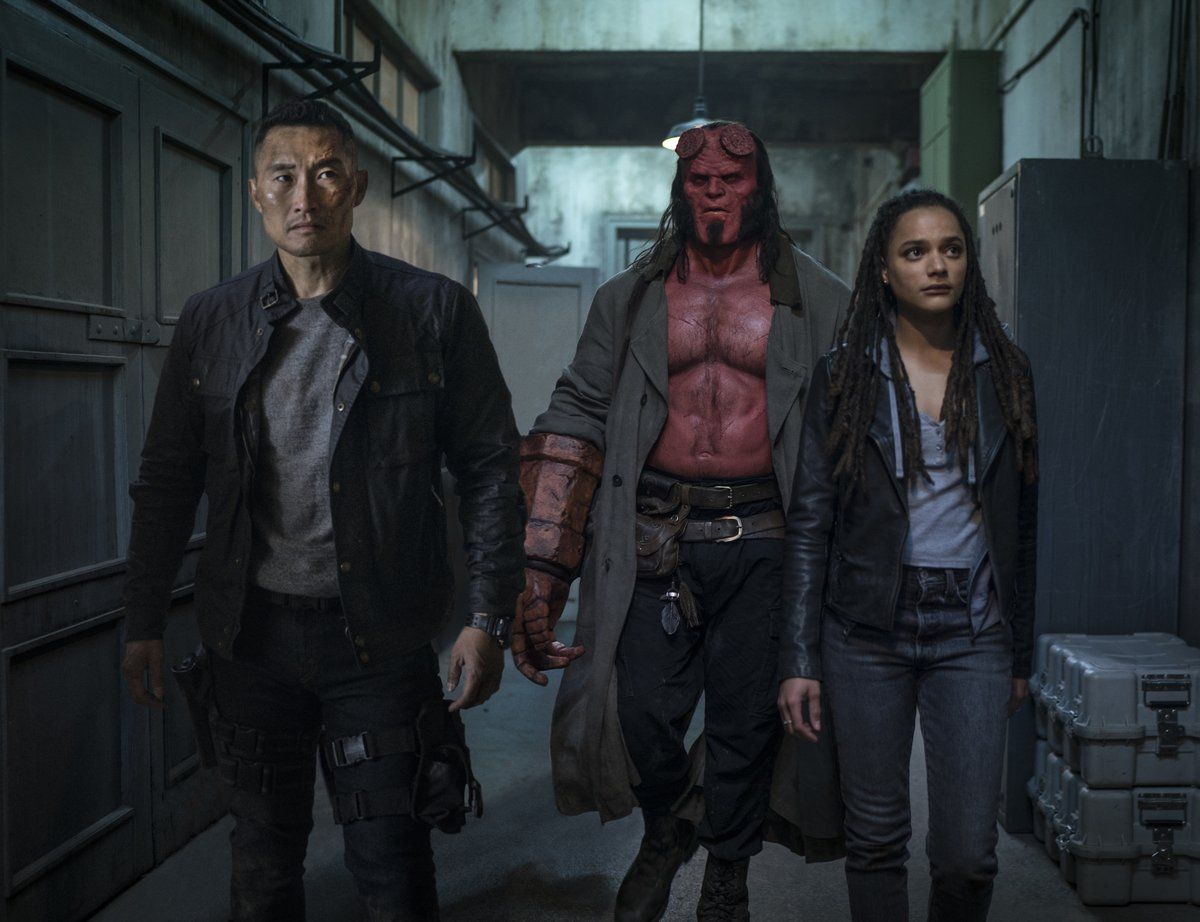 There wasn’t a lot of excitement around Neil Marshall’s blood-soaked, goofy Hellboy reboot. The previous two films featuring the offbeat comic book hero were directed by Guillermo Del Toro and starred Ron Perlman, both about as uniquely suited to the demon’s weird paranormal adventures than anybody could hope to be. But Lionsgate shirked their chances at completing a trilogy in favor of Marshall’s R-rated relaunch, which doesn’t so much change the Hellboy formula as leave it drowning in a pool of blood.

Taking over as the crimson demon crime fighter is Stranger Things star David Harbour. I remain fascinated at the theatre and character actor’s trajectory into a pop culture fixture, with Hellboy his deepest dive yet into that world. His take on the character has piss and vinegar to spare, but he doesn’t seem as comfortable in the role as Perlman, who was seemingly born to play him. Not that Harbour is a problem; he’s got the physicality and command of humor the part demands. When Hellboy is good, Harbour is usually the reason why. When it’s not so good, the blame falls largely on Andrew Cosby’s meandering screenplay.

Right off the bat we’re given a taste of the vulgarity and gore that separates this Hellboy from its predecessors. Narrated by Ian McShane’s Trevor Brutenholm with all of the indecent glee of Deadwood‘s Al Swearengen, the prologue begins in the Dark Ages, which were called that “for fucking good reason.”  Within moments we’ve seen scores of dead bodies, eyeballs being plucked out of sockets by buzzards, and the evil witch Nimue aka the Blood Queen (a campy Milla Jojovich) decapitated, her body sliced into multiple parts, locked in magic boxes, and sent where no man will ever find them.

One of the things that makes Hellboy a unique figure in the world of comics is that he’s this beastly supernatural demon fighting against his own kind to protect those who fear him most. While that may sound like a paranormal take on the X-Men, Hellboy is different in that he’s also fighting against a prophecy that he will someday usher in the apocalypse.  That arc, which played itself out naturally in Del Toro’s movies, is given scattershot treatment here as Hellboy finds himself preoccupied by other monstrous threats. They would’ve been wise to leave aside his prophecied fate altogether, as the film is best when Hellboy and the rest of the Bureau for Paranormal Research and Development (BPRD) are simply out there bashing the skulls of giants, witches, and other creatures. It gives Harbour the chance to fully embrace Hellboy’s obnoxious side, which he is really good at, and Marshall back to the horror roots of his breakout film, The Descent.  If you thought that film was gory, it’s got nothing on Hellboy which doesn’t take long to earn its R-rating. Bodies get ripped apart at the seams, cut open, skewered, literally squashed under gigantic feet, with such reckless abandon it becomes nearly too much to take. This is definitely not for the squeamish and the amount of slaughter eventually loses its meaning there’s so much of it.

The needs of story keep edging their way in, and they are sorely lacking. Nimue’s still-living body is eventually reassembled by her warthog flunky (he resembles a grotesque Rocksteady from the Teenage Mutant Ninja Turtles), and she’s got a serious case of revenge on her mind. While she hopes to bring about the end of the world, she also has a thing for Hellboy and his fiery demonic potential. We’re meant to believe that Hellboy is actually considering a turn to the dark side, to join his own kind against humanity, but his struggle never feels legit and the battle with Nimue is disappointing as a result. An excessive amount of Hellboy mythology is crammed in, from his Nazi origins, to encounters with Nazi hunter Lobster Johnson (played by Thomas Haden Church!), the child-eating witch Baba Yaga, and a secret organization of giant-killers, that would’ve been better spread out to multiple movies. Assuming there are more, of course.

On the other hand, Hellboy gets points for spectacle. While Marshall lacks Del Toro’s visual artistry and flair for the bizarre, he does know how to stage an impressive action sequence. A fight between the aforementioned trio of giants is quite a lot of fun, with Hellboy being batted around like a gnat before unleashing some heinous, piercing violence on them. There’s also a great deal of chemistry with Hellboy’s companions, the occult seer Alice Monaghan (Sasha Lane) who shares a past with him, and BPRD soldier Ben Daimio (Daniel Dae Kim), who hides his feral side under a veneer of cool indifference. A movie that focuses solely on their paranormal adventures would be killer, and every moment they spend fighting baddies is a treat.

This latest Hellboy won’t have you forgetting what Del Toro and Perlman accomplished, in fact it may have you musing on what a third movie might have been. Marshall’s reboot may not be as colorfully macabre, but its appreciation for Hellboy’s darker side is a reminder of the character’s steady popularity regardless of how his story is told.