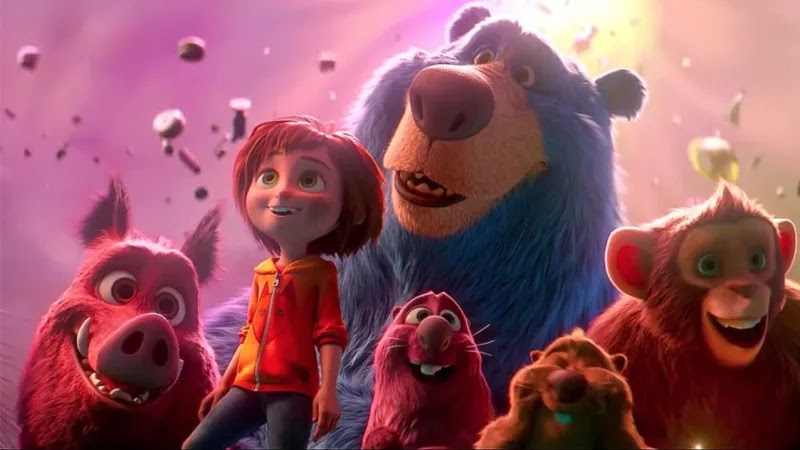 A child’s imagination gives birth to a magical theme park in Paramount and Nickelodeon’s Wonder Park, which is colorful and heavy in lessons for kids to follow, but lacking in the imagination it aims to inspire. Fortunately, it’s also inoffensive and brisk on runtime, so parents shouldn’t mind tagging along for this ride.

In what turns out to be like the fun-sized version of the Tomorrowland storyline, Wonder Park centers on 10-year-old June (Brianna Denski), a creative and destructive powerhouse who builds and tests very experimental theme park rides in her neighborhood. Joined by her BFF and secret crush Banky (Oev Michael Urbas) they hurtle between the houses and through fences with reckless abandon and boundless youthful energy. June’s parents (voiced by Jennifer Garner and Matthew Broderick) deal with the angry neighbors and mounting bills caused by her destruction, refusing to quash their daughter’s passion.

There’s more to this than a kid who needs to lay off the sugar. June and her mother are designing the amusement park of their dreams, where attractions are made of candy and other indescribable things. Whatever could spring forth from the mind of a 10-year-old girl, this place, which they call Wonder Park, can turn it into a reality. The park is run by a group of talking animals with all of the personality traits you’ve come to expect from a movie targeting a younger age group. There’s the reliably sensible wild boar Greta (Mila Kunis); Steve (John Oliver) the uptight British porcupine who frets over park safety; Boomer (Ken Hudson Campbell), a big blue narcoleptic bear; Gus and Cooper (Kenan Thompson and Ken Jeong) are beavers and the required squabbling duo; and finally the team is held together by Peanut (Norbert Leo Butz), a chimpanzee who can create anything with his magical pen, but only when he’s properly inspired.

Wonder Park is basically a paradise, a place any kid, and a heck of a lot of adults, would want to stay forever. But when tragedy strikes and June’s mom falls ill, she forgets everything she loved about the park. June shuts down emotionally, refusing her friends, her family, and anything to do with Wonder Park. Little does she know, her apathy has consequences in the real world. Upon discovering that Wonder Park actually exists, and all of the beloved characters she imagined are real, June finds that the once-wondrous utopia is in a state of disrepair, threatened to be swallowed whole by a looming darkness and overrun by a horde of chimpanzombies.

While young eyes will be dazzled by the bright colors and logic-defying attractions, Wonder Park is a movie with a message, and it stays simple enough for young viewers to understand. June’s depression over her mother has affected all of the things in her life that she used to love, for fear of losing them to a force she cannot control. The script by Mission: Impossible-Ghost Protocol writers Josh Appelbaum and Andre Nemec doesn’t delve too deeply beyond this, so if you’re hoping for the next Inside Out you’ll be sorely disappointed. But it also teaches a valuable lesson about owning up to one’s mistakes, as June takes it upon herself to save Wonder Park from the danger she, however innocently, placed it in. To do it, she’ll have to rekindle the imagination she had forgotten.

The lack of a clear creative vision is felt, however. The film’s original director was fired over misconduct allegations, and he was never truly replaced which is why to this day there’s no one credited. None of the characters stand out as particularly memorable, either visually or in personality, and the novelty of the park fades before long. Fortunately, at only 85-minutes Wonder Park doesn’t overstay the welcome; speaking directly to its audience about coping with tragedy and using the power of expression to do it.