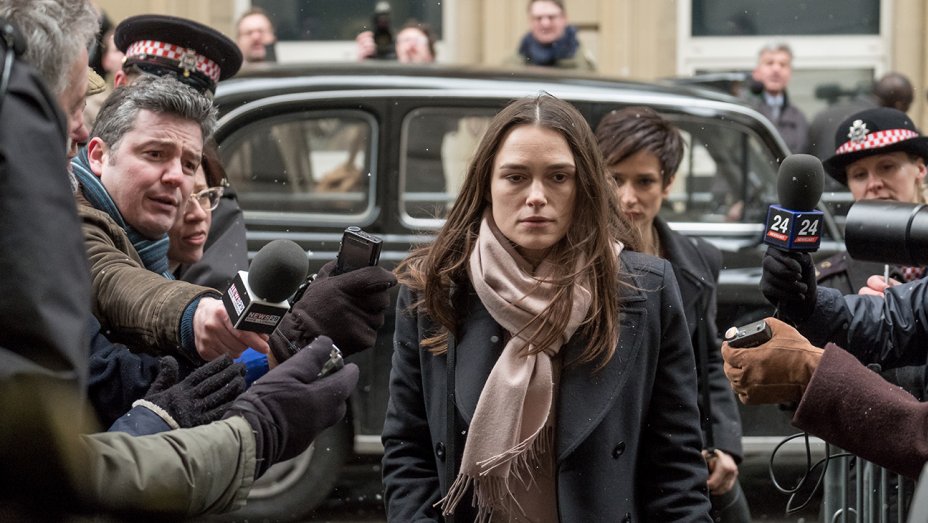 Movies like Official Secrets are tough because, while they are important and timely, that isn’t always met with passion. On just a surface level, the film speaks much the same language as Scott Z. Burns’ The Report (review here), which is receiving some of the strongest notices here at Sundance. While both bring into focus the still-shocking crimes committed by the Bush Administration, and thank you Adam McKay’s Vice for reminding us of them, Official Secrets fails to present this topic in a cinematically pleasing way, despite an all-star cast.

Official Secrets is a perfectly solid but bone-dry political drama about the depths to which the British government sunk in aiding the United States’ fraudulent case for war in Iraq. Keira Knightley plays Katharine Gun, a spy for the GCHQ whose job is to covertly monitor communications between world leaders. One day she and her colleagues receive a high priority email from the NSA that they are to pursue information that can be used to blackmail members of the United Nations security council to approve a resolution approving the U.S. and U.K.’s decision to invade Iraq.  Gun’s disdain for the war is obvious from her obsessive cable news habits, and she finds it impossible to separate her personal view from her job.  She decides to leak the email publicly, which is a violation of the Official Secrets Act and considered an act of treason.

Once the news breaks, so too does Hell break loose in Katharine’s life. An internal investigation at work turns up the heat, and soon her credibility comes under attack by elements in the news media and the government. Things get so bad that her Muslim husband (Adam Bakri) is nearly deported as those in power seek to bully her into submission.  The cloak and dagger elements that come with the pressures placed on Katharine’s personal life are enough to drive an exciting film, but director Gavin Hood (Eye in the Sky, Ender’s Game) takes a broader view that relegates her story to the sidelines for far too long.

Hood’s lack of visual energy doesn’t help matters, and the multiple subplots he engages in are less-compelling than Katharine’s downward spiral. In true Spotlight fashion, focus shifts to the journalistic endeavors surrounding Katharine’s case. Matt Smith plays Martin Bright, a hot-shot writer for pro-war newspaper The Observer, and the first to get his hands on Katharine’s documents. An internal struggle within the paper draws some willing to run the story, like editor Peter Beaumont (Matthew Goode) and firebrand reporter Ed Vulliamy (Rhys Ifans), and others who fear pissing off Downing Street such as Kamal Ahmed (Ray Panthaki), who comes across like a toadie for Tony Blair.

Meanwhile, Hood’s attentions also veer into the private lives of the lawyers representing Katharine. Ralph Fiennes gives an uncharacteristically pedestrian performance as human rights attorney Ben Emmerson, who chews up a lot of time that should’ve gone in telling Katharine’s story since she’s the one taking most of the risk and suffering the most harm.  If Hood’s fracturing of the narrative led to a hero/traitor discussion ala Edward Snowden, whose name comes up for very good reason, then perhaps Official Secrets would have more drive behind it.

Gun’s sacrifice is something that shouldn’t be forgotten, and definitely is worthy of the big screen treatment, but Official Secrets lacks the momentum and perspective to tell her story in a way that will reach the most people.