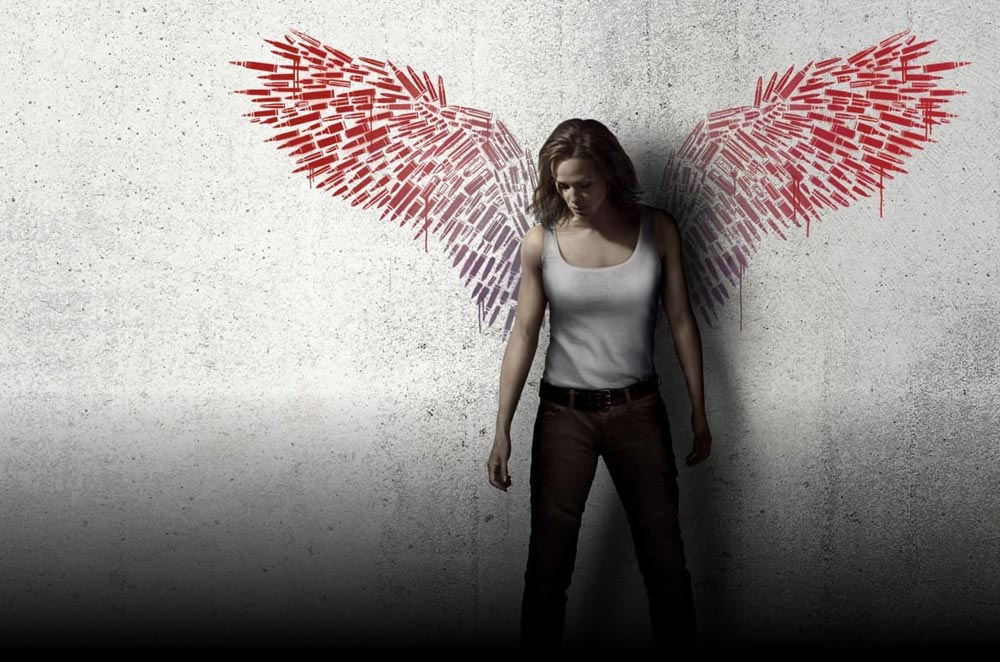 After years of watching her in domestic mommy roles, there was a genuine thrill to see Jennifer Garner back in Alias kick-ass mode for her new film, Peppermint.

That thrill lasted all of about five minutes.  A bland Death Wish riff with the expected racial stereotypes, grim cinematography, bumbling cops, and anti-hero nonsense, Peppermint can’t even be saved by Garner’s obvious enthusiasm to be packing heat rather than packing school lunches.

The film is directed by Pierre Morel, who peaked with District B13 years ago and has been aping himself ever since he hit it big with Taken. Peppermint looks like it was run through the Taken filter, beginning in utter gloom as Riley North (Garner) beats the snot out of then kills some Mexican gangbanger in a car before dumping his body. Flashback a few years and we see a very different Riley; longer hair, smiling, happy with her young daughter Carly (Cailey Fleming) and mechanic husband Chris (Jeff Hephner). Not everything is great, though. They’re toughing it out financially, and the wealthier moms aren’t shy about isolating Carly from their own kids.  “You should’ve punched her lights out”, Carly says after one particularly snotty mother causes a fuss.

Unfortunately, it comes a little too late for Carly and Chris who are gunned down at a Christmas carnival by, you guessed it, a bunch of Mexican thugs.  They may not say the word “Mexican” but I bet their license plate had “MS-13” on it. All of this just moments after Carly ordered a double scoop of Peppermint ice cream. Riley, who had been shot as well, saw the killers’ faces and reported it to the cops, but did they face justice? Of course not. They get off scott free, Riley flips out, gets tased for her drama and sent to a psych ward. She busts free and vanishes for five years, where she apparently traveled the world learning how to fight and kill like a pro. How does a normal suburban mom with seemingly zero experience in the art of wetwork figure out where to even look for such training? It would be nice if the script clued us into that.

It would also be nice if Peppermint had taken more of a Blue Ruin approach to Riley’s quest for vengeance, because the setup is actually quite similar. Her inexperience in exacting revenge would have been seen as a virtue, and we could follow Riley as she stumbles through this killer phase of her life and deals with the motional fallout. But instead she’s friggin’ Batwoman, dispatching entire rooms full of tattooed brown guys, stringing them up on ferris wheels (!!!) or worse. It just doesn’t make any sense and there’s never any attempt to make it even remotely plausible.

Of course there are a pair of cops always a step behind Riley’s trail, Carmichael and Beltran, played by John Gallagher Jr. and John Ortiz, both too good for these vanilla characters. They’ve figured out that Riley’s family was killed on a hit put out by cartel boss Diego Garcia (Juan Pablo Raba), and those who cross him usually end up dead. He’s got people inside the police force, too, because don’t they always? Even so, the cops are unprepared for the lethality of Riley’s attack against the cartel, or the support she gets from the locals and on social media, who see her as a hero. Down on Skid Row they’ve even painted a giant mural of Riley as their guardian angel, which makes me think they’ve got too much time on their hands. You think all those drugs will smoke themselves?

Peppermint fails to make the best use of the one thing that separates it from the millions of other generic revenge flicks out there, and that’s Riley herself. Other than a scene where she uses a tampon to staunch a nasty knife wound there’s practically no female perspective at all. She might as well be Charles Bronson or Bruce Willis, and we’ve been down that road before. A lot. Garner does her best with the material and she makes you feel for Riley and her need for closure, but the screenplay doesn’t afford her a lot of opportunities. Garner can still bring it, and hopefully she gets another chance in a movie that’s worthy of her.
﻿