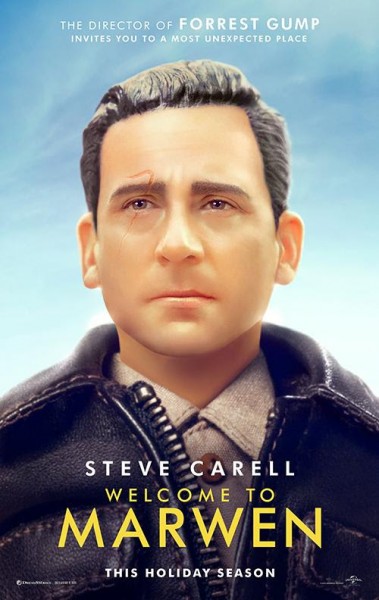 When Steven Carell makes a play for the awards season the results have been pretty mixed. He earned a nomination for Foxcatcher a few years ago but subsequent attempts in The Big Short, Battle of the Sexes, and Last Flag Flying have fallen short. But he’ll be back this season with Robert Zemeckis’s Welcome to Marwen, a dramatic adaptation of the acclaimed documentary Marwencol.

The first trailer has arrived and it’s a pretty odd mix of emotions, as one might expect for the story of a man who tries to overcome memory loss and PTSD by building a miniaturized town called Marwen where he lives out fantastical adventures. It’s the story of Mark Hogancamp, who was the victim of a brutal attack by a group of Nazis that left him in such a traumatized state. By living out his wildest fantasies in Marwen it gives Mark the strength to move on and face reality.

It’s a tremendous story but I’m not feeling this trailer, which is like a poor man’s Michel Gondry. The human emotions feel out of place in the “toy” world, and the live-action scenes are melodramatic to a fault, probably because of the heavy-handed musical cues. This could all just be a fault of the trailer and the movie itself could be significantly better. But at the same time I know that Zemeckis isn’t exactly known for his subtlety.