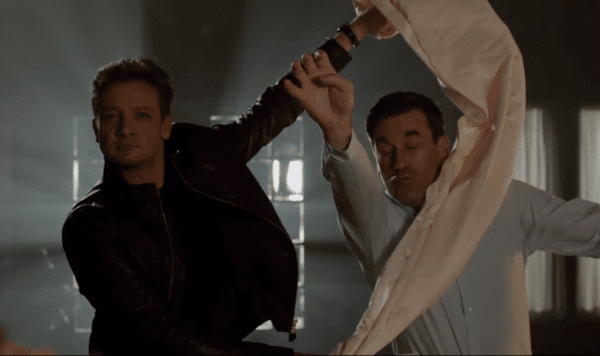 Around this time last year we learned that Jeremy Renner had suffered an arm injury while shooting a movie, and naturally our first thought was “Damn, Avengers: Infinity War must have Hawkeye doing some crazy shit!”  Of course, that was FAR from true because the archer isn’t even in the damn thing, and perhaps we should have taken the hint when word got out that he was actually hurt while shooting Tag, the goofy and harmless-looking comedy.

Well now we’re finding out just how badly Renner was injured. Co-star Jon Hamm was on Ellen and revealed the moment when Renner’s got hurt, and also realizes the irony of the Avengers star getting banged up in a movie about playing a game of tag…

“Jeremy Renner who broke both of his arms at the same time. Day three of production. We had 40 more days to go. Keep in mind this is a man who’s done a hundred ‘Avengers’ movies and been fine. And he does a movie about playing tag… both arms, like firewood, just snapped like a matchstick.”

So how does a guy with broken arms star in a movie where reaching out and tagging others is essential? Why, with the help of CGI magic, that’s how…

“No, he wore greenscreen casts that were eventually painted out in the edit,” explained Hamm.

Okay, so if this shit looks terrible I hope Renner gets as much grief as poor Henry Cavill has had to endure over a stupid mustache.

Tag, which opens June 15th, stars Renner alongside Hamm, Isla Fisher, Jake Johnson, Rashida Jones, Ed Helms, and Hannibal Buress in the story of lifelong friends engaged in a years-long game of tag, with Renner as the only one who has never been “it”.