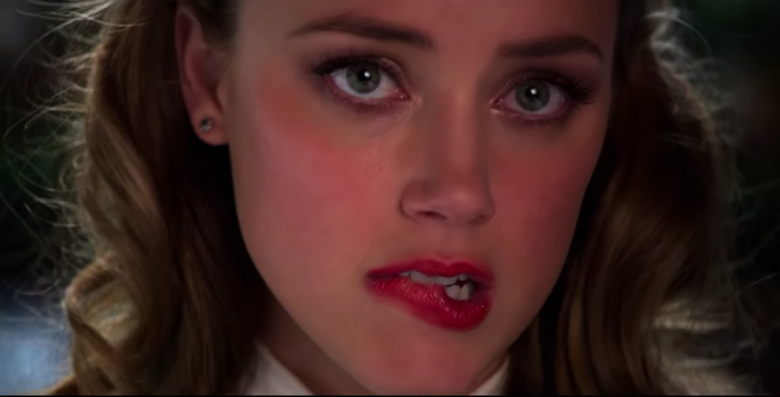 Oh…hey, London Fields is finally coming out, eh? This comes as a genuine shock to yours truly and I’m sure plenty of others who remember the controversial film’s aborted public premiere three years ago (!!!) at TIFF. It still played for press, however, and was subsequently hammered, with director Matthew Cullen complaining that producers had included footage he didn’t approve. Lawsuits followed, including a $10M claim against star Amber Heard, who was then dealing with a very public divorce from co-star Johnny Depp with allegations of physical abuse. Oh, and Heard filed a lawsuit of claiming producers used a body double to make it seem like she did a whole bunch of nudity.

And now the film is actually coming out, but after all that shit does anybody even care? The adaptation of Martin Amis’ 1989 novel about a clairvoyant femme fatale who sees her own murder has been on the wish list for numerous filmmakers, including Michael Winterbottom and David Cronenberg. But it proved too tough a nut to crack for them, and it was music video director Cullen and screenwriter Roberta Hanley who got it done.

Heard plays the aforementioned femme fatale, Nicola Six, surrounded by an all-star cast of dudes who really want to have sex with her. Along with Depp the film stars Billy Bob Thornton, Jim Sturgess (name spelled wrong in the trailer, not a good sign), Theo James, Cara Delevingne, Jason Isaacs, and Jaimie Alexander.

A sign of a bad movie is an overlong synopsis which gives everything away. With that said, here’s the lengthy as shit synopsis:

Recently arrived in London in the hope of writing one last book before succumbing to a fatal illness, American author Samson Young (Billy Bob Thornton) falls in with a cast of characters who just might give him the story he is looking for. First, there is Keith Talent (Jim Sturgess) a small- time crook and dart player always on the lookout for his next scam. Then there’s Guy Clinch (Theo James), an upper class banker who hangs out at Ned’s favorite pub, searching for distraction from his boring life, his spoiled wife, and their monstrous toddler. And, just like a scene from a movie, into their lives walks Nicola Six (Amber Heard), a spectacularly beautiful woman-of-mystery who instantly ensnares all three men with her charms. Of course, Ned and Keith want to possess her, but Sam sees something else—in Nicola he sees the heroine of the book he so desperately wants to write. Following her, studying her, and watching her become a different woman depending upon which man she is seducing, Sam starts weaving a tale, based on Nicola, or Nicola as he imagines her to be. He also discovers that the reason she lives like there’s no tomorrow, is that she’s fed up with her life and has secretly been plotting her own murder. Now that Sam knows the climax of his story, the only question is who will the murderer be? Is it Keith, the criminal, Guy, the millionaire, or is it Sam himself—a dying man practicing a dying art, who will do anything to end his book—and his life—with a big bang?