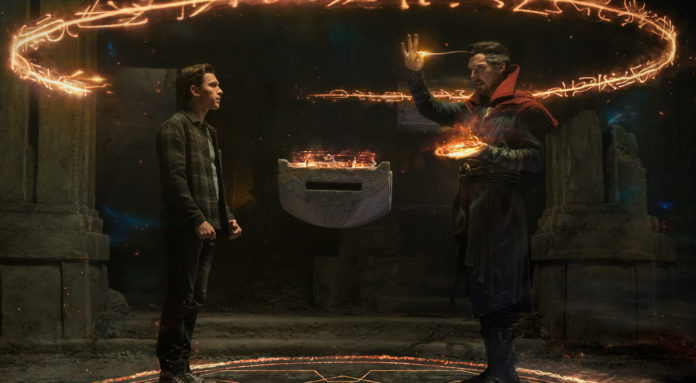 Peter Parker’s (Tom Holland) world just got flipped turned upside down in Spider-Man: No Way Home. Literally when Doctor Strange (Benedict Cumberbatch) enters the mirror dimension trying to clean up Peter’s mess, but figuratively as well. Beginning immediately after the events shown in the mid-credits scene of Spider-Man: Far From Home (as 23+ MCU films have taught us, you don’t leave until that final credit rolls by). Mysterio (Jake Gyllenhaal) has broadcast to the world that Spider-Man is indeed Peter Parker. Peter had a week to experience a seemingly ‘normal’ life – only the people he wanted to know his identity knew. His close-knit circle of girlfriend MJ (Zendaya), best bud Ned (Jacob Batalon), Aunt May (Marisa Tomei), and Happy (Jon Favreau). All that is gone now as he has become the most famous person on the planet. 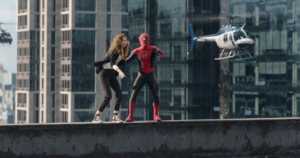 Being a friendly neighborhood Spider-Man was stressful enough without this additional notoriety. It would be one thing if Peter was the one shouldering the burden, but everyone he loves is affected. The government is breathing down their necks, their educational futures are in jeopardy, and so is their safety. Half the world thinks Peter murdered Mysterio and they aren’t biting their tongues letting him know it. Peter made the choice to become Spider-Man, but the others are innocent. They don’t deserve this, and Peter is desperate to fix it. Which leads him to Doctor Strange’s door asking for a favor. If he could just make the world forget Mysterio’s message, all could go back to normal. Brainwashing the world has to be within the powerful Magician’s wheelhouse, right? 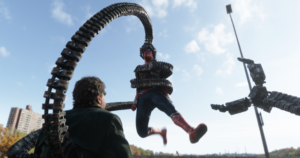 As Strange is performing the spell, Peter realizes he hasn’t thought this through. He can’t have EVERYONE forgetting he is Spider-Man. What about MJ? And Ned? Or May, she has to know! Telling them the first time was so awkward, who would want to go through that again? With Peter constantly having Strange change the spell, things go awry. Instead of everyone not knowing Peter is Spider-Man, those in different universes that know Spider-Man’s identity begin to appear. Peter finds this out the hard way when he runs in to Doctor Octopus (Alfred Molina). They are equally confused when Peter isn’t the same one from Doctor Octopus’ universe. Others quicky begin popping up – Electro (Jamie Foxx), Green Goblin (Willem Dafoe), Lizard (Rhys Ifans), and Sandman (Thomas Haden Church). Strange and Peter realize they must try and fix things, but Peter begins to wonder what the right thing to do is… 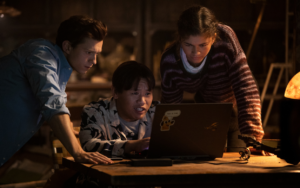 The core team is back for this third installment of Holland’s Spidey. Jon Watts is behind the camera working with a screenplay written by Chris McKenna and Erik Sommers. This team has been the brain trust of all three Holland Spidey films (Spider-Man: Homecoming did have a larger writing team that McKenna and Sommers were a part of). The continuity is evident as they are able to get the best from Holland and the rest of the cast. No Way Home gives them chance to truly show their abilities. Holland’s performance is one that will not be quickly forgotten. He brings a depth to the character that we have not seen in quite some time. In the nearly two-and-a-half-hour runtime, they push almost all of the right buttons. There was a lot to juggle in this film, and while things get a bit jumbled, it is overall masterfully done. 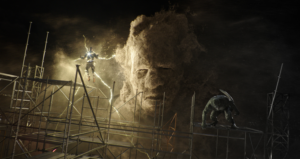 The internet is filled with rumors and possible spoilers galore for this newest iteration of Spider-Man. Don’t worry, you won’t find any here. What I will say is that with characters spanning almost two decades of film and three iterations of the web crawler, what Watts & co. set out to do was a monumental task. I am a self-admitted Spider-Man fanboy – I grew up reading the comics and watching the movies and shows. I remember the first time seeing the character brought to life in Raimi and Maguire’s trilogy and how blown away I was. No Way Home is the movie I’ve been waiting for. It is a love letter to the character, a greatest hits compilation. 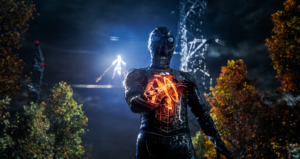 No Way Home was provided with the rare opportunity to “fix” issues from past iterations. An opportunity Watts and his team did not shy away from. It felt as if they were on a mission to address whatever fan complaints they could about the past films. They strike a unique blend of nostalgia and self-deprecation that fans of the web slinger will love. To go along with past characters themselves we are treated to homages of the music and visuals. Having the former movies fresh in your mind is certainly not a necessity but may help recognize some easter eggs. When the dust settles, No Way Home is not only a powerful addition to the MCU, but the exact type of film they needed to usher in this new phase. No Way Home is a must watch, and many may see it as MCU’s crown jewel, I certainly do.