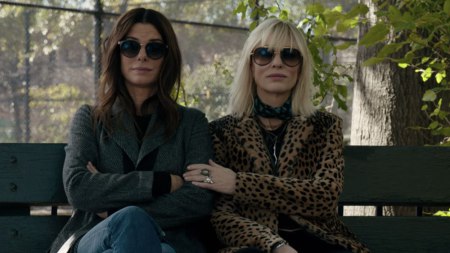 1. Ocean’s 8 (review)- $41.5M
Gary Ross’s star-studded Ocean’s 8 with Sandra Bullock, Cate Blanchett, Anne Hathaway, Mindy Kaling, Sarah Paulson, Helena Bonham Carter, Rihanna and Awkafina opened with $41.5M. That’s a real mint for the rebooted franchise, a semi-sequel to the Steven Soderbergh movies of before. Comparisons will obviously be made to 2016’s female-led Ghostbusters, which opened a bit bigger with $46M, but the difference is that movie cost $140M+ while this one was roughly half that. If Ocean’s 8 hits the same $229M haul as that it will be a hit wile that one arguably failed. I think they were smart to market this as a continuation of the franchise rather than “Hey look, we’re making the same movie but with ladies!”, because sadly there are a lot of people who won’t show up to see anything they perceive as being gender-flipped. Instead they are pushing the stellar cast, the celebrity cameos, the glamour, all of the things that made the previous movies such a success.
2. Solo: A Star Wars Story– $15.1M/$176.1M
Well on its way to being the lowest grossing Star Wars movie ever, Solo: A Star Wars Story earned $15M and only has $176M domestic, for a total of $312M worldwide.
3. Deadpool 2– $13.6M/$278.6M
4. Hereditary (review)- $13M
Similar to The Witch‘s breakout a couple of years ago, A24’s acclaimed horror Hereditary has opened strong with $13M. That’s a record breaker for the indie distributor, who picked up the film out of Sundance just as they did The Witch. Clearly they’ve got an eye for genre that has the potential for greater appeal, and if this keeps up they’re looking at one of their biggest stateside hits alongside Moonlight and Lady Bird.  Buzz has been building about Hereditary since it debuted in Park City, with a lot of that going to the performance by Toni Collette, and I wouldn’t be surprised if we see some more spots focusing on her as a possible awards contender.
5. Avengers: Infinity War– $6.8M/$654.7M
6. Adrift– $5M/$21.7M
7. Book Club– $4.2M/$56.8M
While that number isn’t huge, it’s worth noting this mature-skewing comedy only cost $10M. Book Club will definitely go down as a success.
8. Hotel Artemis (review)- $3.1M
The most disapppointing news of the weekend is the $3.1M debut of Drew Pearce’s fun, clever movie about criminals, Hotel Artemis. The star-studded cast is led by Jodie Foster, along with Dave Bautista, Jeff Goldlub, Sofia Boutella, Charlie Day, and Sterling K. Brown, who play patients in a hospital for villains. I think this one was hurt by a few things. One, it didn’t have a strong marketing presence, and I think Global Road dropped the ball in that regard. They may have been spooked by Ocean’s 8, a rival movie also about criminals but is clearly designed to look like more of an entertaining romp. Audiences clearly chose the movie that looked like a diversion while Hotel Artemis seemed heavier than it is.  While the reviews have been positive I think the numerous assertions that it’s basically a ripoff of John Wick‘s The Continental have hurt perceptions of it. Hopefully people will give this a chance to see that it stands on its own quite well. I’ll be sorely disappointed if we don’t get to hang out in this world Drew Pearce has created a little while longer.
9. Upgrade– $2.2M/$9.2M
10. Life of the Party– $2.1M/$50.2M