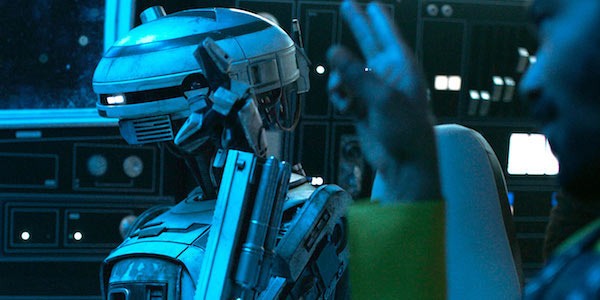 
Solo: A Star Wars Story is the franchise’s first legit summer popcorn movie, designed to be a big, entertaining romp at your favorite multiplex. So while its ambitions are smaller than the “core” trilogy films, or even Rogue One which tied so neatly into them, Solo still makes some significant impact on the stories we’ve come to know and love. One moment in particular will change the way you perceive the original trilogy forever, and it involves the droid L3-37, voiced excellently by Phoebe Waller-Bridge.

L3-37 is different than just about every droid we’ve ever encountered in Star Wars. While we’ve always known to some extent that droids are second-class citizens, L3-37 is the first we’ve seen who actively challenges that status. When we first meet her she’s attempting to break up an underground droid “fight club”, encouraging its silent combatants to stand up for their rights. L3-37 is also the first droid to overtly allude to her own sexuality, teasing a romantic relationship with Lando Calrissian (Donald glover) who is clearly more to her than just her owner. They do seem to be friends, or at the very least partners in crime. With Lando recently confirmed to be pansexual it’s possible they were lovers.

Late in the film L3-37 meets a terrible fate when she is shot in the middle of a shootout on Kessel while trying to liberate other droids and start a rebellion. It’s a noble end for the activist droid, but her story doesn’t truly finish there. She is gathered up and her navigational computer, noted to be the best in the galaxy, is uploaded into the Millennium Falcon so Lando, Han, Chewie, and Qi-Ra can make a hasty escape. L3-37 is now part of the Falcon, and its thanks to her that Han can make that legendary Kessel Run we keep hearing so much about. Of course, a woman does the hard work and the dude gets all the credit.

The freakout over this decision to make L3-37’s “consciousness” part of the Falcon has sparked an Internet outrage. If I read one more thinkpiece comparing it to an episode of Black Mirror I’ll scream. The uproar is over L3-37 basically being subjugated, the thing she fought so mightily against, and turned into just another tool for the humans to use.  The female droid and advocate for droid rights has had her agency taken away, doomed to plot hyperspace routes for as long as the Millennium Falcon soars. 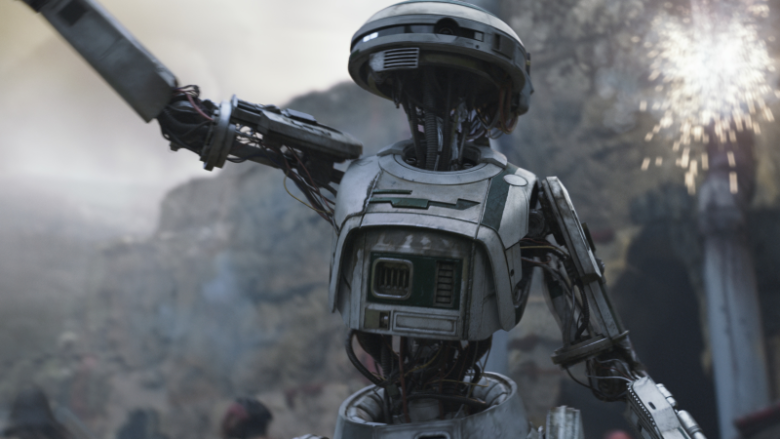 To be fair, it does change the way we look at the Falcon’s earliest appearances, doesn’t it? There’s that one peculiar scene in The Empire Strikes Back when C3PO plugs in to the Falcon to figure out why the hyperdrive is fitzing out, and he says “Sir, I don’t know where your ship learned to communicate, but it has the most peculiar dialect.”

Well, that dialect was, as we know now, L3-37. Of course it’s peculiar. She was a peculiar droid; brassy and argumentative with more of a personality than any other droid we’ve seen. But when you think about it further, all of this makes sense. In a recent episode of Cinema Royale, myself and Joblo.com‘s Chris Bumbray talked about the implications of L3-37 being part of the Falcon. Put simply, it explains why Han always seems to be met with so much embarrassing resistance from the ship (like the aforementioned hyperdrive snafu), and why Lando seems to have no issues at all when he gets back in the pilot’s seat in Return of the Jedi. Okay, he too has a problem but that was caused by someone else not fixing what was promised.  The ship also seems to be flying quite well on its own during this scene, because that ain’t Leia flying. L3-37’s co-pilot skills are still coming in handy.

L3-37 has a preference, and she has chosen Lando, naturally. It also explains why Lando never gets over losing the ship to Han, and adds poignancy to every time they refer to the ship as “her”. And the guy who wrote those crucial stories is Lawrence Kasdan, who also co-wrote Solo. It’s possible he was laying this groundwork all along. At least I choose to believe that’s the case.

But the notion that L3-37 is just another case of a female character being sacrificed in service of a male is ridiculous.  First of all, it demands that you believe L3-37’s story is over. That now she is just this passive observer to all of the many amazing feats accomplished by Han or Lando on behalf of the Rebellion. That’s not true, though, and we have multiple movies that prove it’s not true. The Falcon is, I would say, the heart and soul of the rebel army. And that means L3-37 is the heart and soul of the Rebellion. She is a symbol of hope and has literally saved their hides on multiple occasions when no other ship could.  This is not a “Women in Refrigerators” moment the way one friend tried to tell me a few days ago. L3-37 was never helpless, she fought and died for a cause she believed in, and she continues to do so in another form. She certainly wasn’t “fridged”.

How she continues to fight also shows that her personality and spirit lives on. As the Falcon she’s as temperamental as ever and helps who she wants to help when she wants to do it; previously we took that to just be Han’s piss poor care of the ship, but we know now that it was L3-37’s brassy attitude. And maybe she IS upset at Han’s piss poor care of the ship. You see how pristine the Falcon was in Lando’s care? Come on! I’d be mad and fuck up the deflector shields on occasion, too. Take that, Solo! 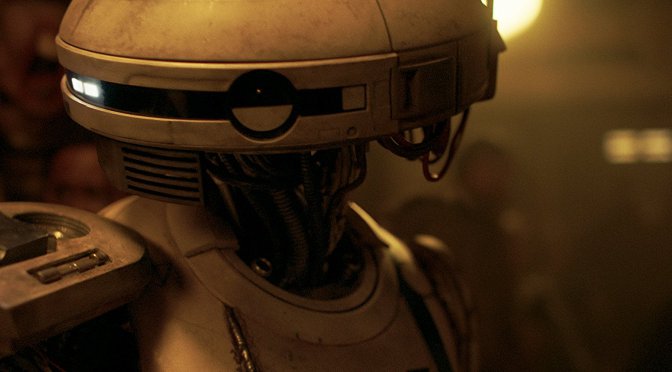 I get it. With HBO’s Westworld we’ve come to ask deeper questions about artificial intelligence. Should a synthetic being that can mimic human personality be treated as if it is indeed human? I don’t know the answer to that ethical dilemma.  I’ll keep watching Westworld to find out, though. I had my issues with L3-37’s humor not completely meshing with the film’s tone, but I recognize her as an important and very progressive addition to Star Wars at a time when it’s dangerous to create such a character for fear of fan backlash. So if you’re going to do it, better make it count. L3-37 has been woven into the fabric of Star Wars; she continues to fight the good fight and make choices that determine her fate as well as that of the people she cares about. What better honor is there for a droid who believed independence was a right for all creatures.

Ron Howard Says There Is No ‘Solo’ Sequel Planned