Last week’s Gotham
ended with Selina getting shot by Jeremiah. The episode had numerous
nods to Alan Moore’s ‘The Killing Joke’ from the title of the episode, numerous
mentions of ‘one bad day’, the way Selina was shot, Bruce’s torture mirroring
what Gordon went through – it was plastered throughout the episode which I’m
sure many of you noticed and appreciated. It was fantastic to see Gotham’s tribute to this great graphic
novel. This week’s episode is the season finale and picks up right where we
left off.

Gotham Burning story
acr: “The world may seem dark, but there is light.” – 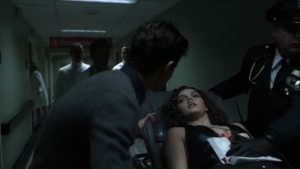 Selina is being raced through the hospital into surgery with
Bruce by her side. Alfred has taken Jeremiah
to the GCPD after the mini beating he gave him and is about to head back to the
hospital to meet Bruce. Jeremiah smugly tells Jim he would like to press
charges against Alfred and that he demands to speak to Bruce. Apparently there
are more bombs that Jeremiah has hidden in the city and the only way he’ll give
up the locations of them is if he can talk to Bruce. 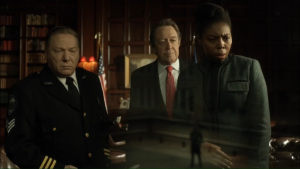 The Mayor of Gotham keeps pushing to lift the evacuation, which
Jim opposes. Eventually the mayor has had enough and makes the call to end the
evacuation himself. One of his staff members notices a man on a nearby rooftop
watching them. This man turns out to be Ra’s and unbeknownst to them, Ra’s
staring at you is never a good sign. Just then, the bomb that is planted
underneath city hall explodes. Jim now knows that Jeremiah is not bluffing and
is trying to gently persuade him into giving up the location of the other
bombs. The interrogation is interrupted by the arrival of the army with the
ranking Major relieving Jim of his command and taking over. Jim
immediately disobeys an order and is put into custody. Riddler intercepts the
soldiers taking Jim and uses tranquilizer darts to knock them out.
While this is happening – Penguin, Butch, and Tabitha have
finally found Hugo Strange who has a plan to return Butch to normal. Tabitha gets
a call that Selina has been shot and races back to Club Siren to make a plan to
kill Jeremiah once and for all. Ra’s had just stopped by Club Siren to
try and convince Barbara to rule the League of Shadows with him. He lets her
know that he wants to destroy the city so his heir can rise from the ashes. 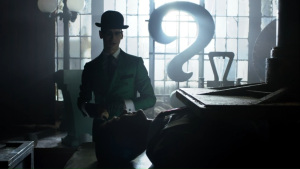 Jim wakes up in Riddler’s lair which sports the iconic giant
question mark we all know and love. Riddler begins torturing Jim, his love for
Lee and jealousy of their past relationship, and pure insanity, driving him. If he can
get Jim out of the way, then he and Lee can be together. Lee walks in on
the torture and lets them both know that she is leaving Gotham. She
would like Riddler to come with her, but not if he kills Jim. This is an offer
that the Riddler can’t refuse and he lets Jim go. Lee meets Jim outside, gives
him car keys, and kisses him goodbye. Something tells me this can’t be the end of
their story.
During the time Jim was preoccupied by Riddler, the Major
brought in Bruce – against his will – to talk to Jeremiah. Jeremiah keeps
alluding to another person during their conversation. Just as Bruce realizes
that Jeremiah is talking about Ra’s, the lights go out and Bruce and Jeremiah
have vanished when they come back on. Not only have Bruce and Jeremiah
disappeared, but all of the bombs that the GCPD had managed to acquire have
disappeared as well. Jim realizes that Gotham’s bridges are the target of the attack and
orders them to be cleared. 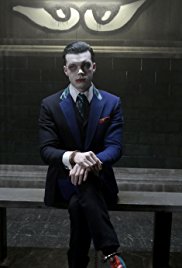 Alfred goes to Club Siren to try and find Ra’s. Barbara and Tabitha
are there and they all realize that they can benefit from working together. Penguin comes at the last second and joins the task force. All of them
head to where Bruce is being held captive. A fight ensues and during the melee Barbara manages to get the newly forged dagger into Bruce’s hands and stab Ra’s
with it. As Ra’s is dying, he tells Bruce that he must become Gotham’s dark
knight. Just then the bombs go off and destroy all of the city’s bridges as
everyone looks on in horror.
The bombs going off have a ripple effect for everyone in the
city. Lee realizes that she can’t leave Gotham anymore and must stay and help
the people of the narrows. Riddler is obviously upset at this news and tries to
sneak up on her to literally stab her in the back. Lee is a sly one and manages
to stab him first. Riddler takes the knife from his wound and stabs her as
well. They both share a super awkward kiss and collapse. Crime is overrunning
the city and we see all the major players (Firefly, Penguin, Fries, Scarecrow)
mobilizing to try and gain turf. 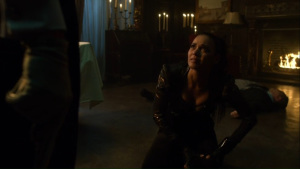 Tabitha goes back to see Strange and check on Butch. The
procedure worked and Butch is back to normal. Tabitha and Butch are overwhelmed
that they can live a ‘normal’ life together again. Penguin comes in to check on
Butch and they both thank him profusely for his help. That’s when Penguin
strikes in a moment of utter savagery. He shoots Butch, killing him in front of
Tabitha. Tabitha lunges at Penguin, and he shoots her in the leg immobilizing
her. He lets her know that he never forgot about them killing his mother and he
has been plotting his revenge the whole time. Tabitha killed the person he
loved, so he killed the person she loves. He wants her to live with that pain
until he eventually kills her too. Tabitha goes to Club Siren to let Barbara
know what Penguin did and that’s when Barbara declares a war on men. 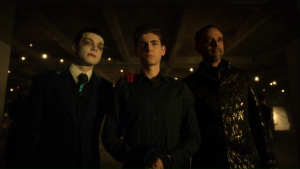 Bruce and Alfred go to check on Selina, who is now out of
surgery. Bruce finds out that the bullet severed her spinal cord and that the
damage is most likely permanent. Bruce sends Alfred with Selina out of Gotham
to make sure she is okay while he stays. Bruce has officially taken
responsibility of the city – another huge step in his transformation to the
dark knight. Bruce sees the spotlight on top of the GCPD, the one shining
beacon of light in the dark city. He goes to the rooftop to find Jim, who has
also refused to evacuate the city. It’s the first of many meetings under the
future bat signal on the roof of the GCPD for these two.

My thoughts:
This season of Gotham
has been fantastic. The finale was not my favorite episode of the season, but
it certainly had its moments. Gotham city is being plunged into a deserted
crime island and that will only lead to an even crazier and more violent season
5. Selina’s injury opens up the possibility of her becoming Oracle, but in
Gotham anything can happen and they may find a way for her to fully heal and
somehow obtain more cat-like abilities in the process. Next season seems like
it will have a gangs fighting gangs with Jim, Bruce, and company trying to keep
order feel to it. The flashes of new criminals, like Manbat, at the end of the
episode were pretty exciting and I’m looking forward to seeing the destruction
they help bring to Gotham.
Next season on Gotham:
There are rumors that next season
of Gotham will be the final one –
the show has been hampered by its inability to use certain images and names.
There is only so long that it can go on without actually having Batman in the
show. That being said, I was hoping for more than just one season left, and
nothing has been officially confirmed, other than season 5 getting renewed. We will of course see Bruce continue his path to becoming the Dark Knight, and all the rampant crime throughout the
city will certainly speed up this process.