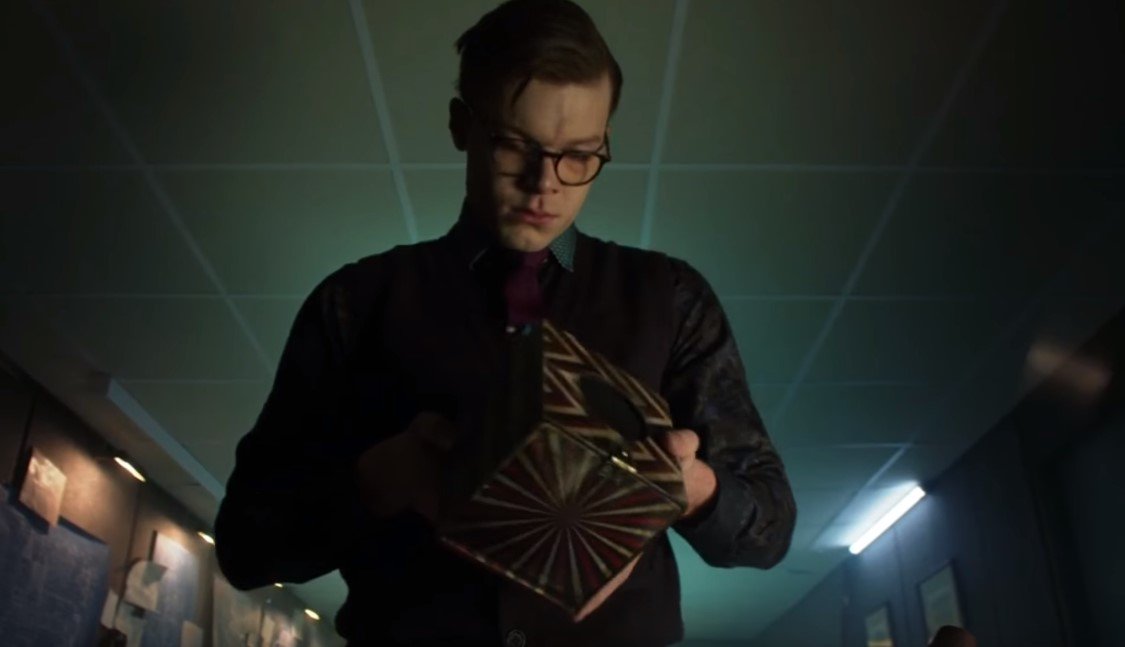 This week’s Gotham
was amazing. The Barbara story line was good, but it was definitely overshadowed by Jerome’s which the Gotham writers hit out of the
park. Let’s get right to it!
Jerome’s Master Plan
story arc: “Try threatening me again, but this time – try it with a smile” –

The episode begins with a meeting held between Gotham’s
interim mayor and some of Gotham’s elite. This meeting is rudely interrupted by
Fries and Tetch who round up this hoity toity bunch and bring them to Jerome.
Scarecrow sprays one of them with the laughing gas and the effects are just as
terrible as we saw last week.
It turns out that it is Bruce’s birthday and Alfred
has a special present for him. He gives him a gorgeous brand new car – which is
essentially the very first basic batmobile. It is a matte black Mustang with
anti-reflective paint so it is difficult to see at night…oh and it is
bulletproof. 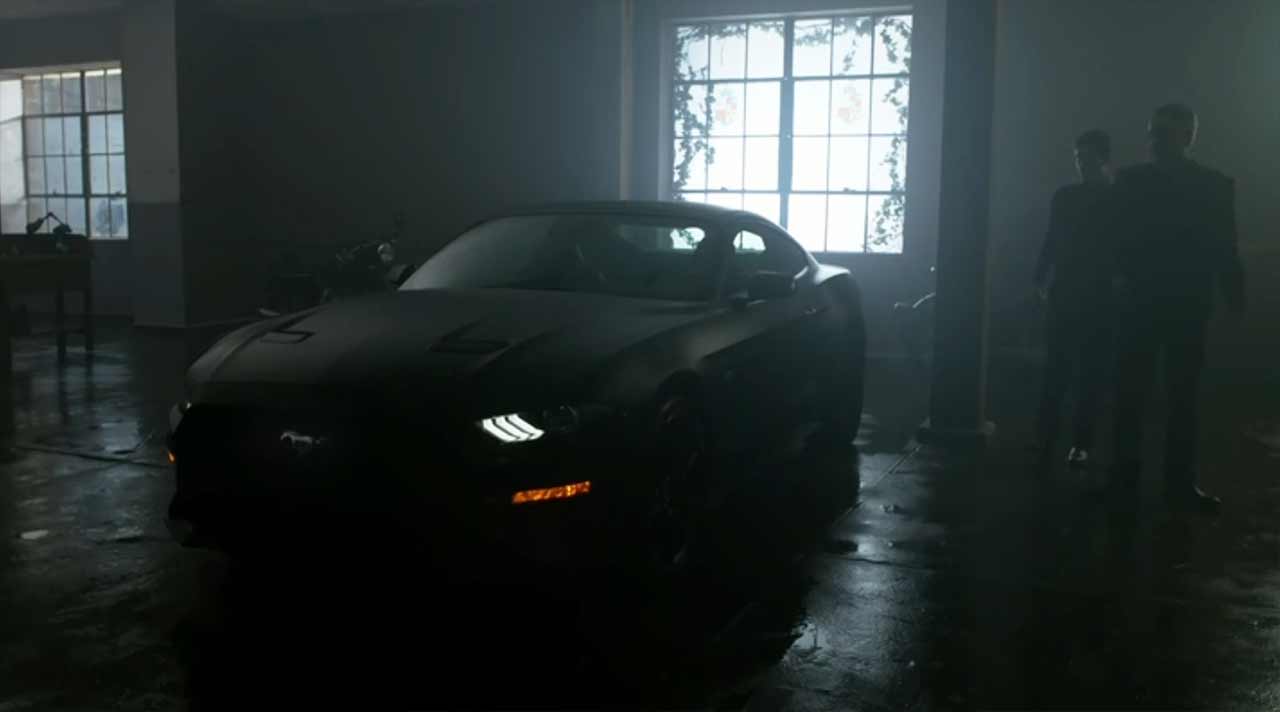 Penguin, who is terrified of Jerome, goes behind his back
and visits Jim. He tells Jim of the new gas that Scarecrow has created and the
awful effects it has. Unfortunately Jerome has covered his bases and only tells
each member of his group their specific role and not the entire plan so Penguin
can’t tell Jim what is in store. Before Jim can get any helpful information from Penguin,
Harvey tells him that Jerome has been spotted near Paisley Square where the
Gotham music festival is going on.
At the music festival there is a band playing on
stage in front of a large crowd. Jerome decides that he can provide some better
entertainment so he brutally beats the lead singer with the microphone stand
and takes center stage. He sets up six chairs and puts the mayor and the other
members of the meeting into four of the chairs. Jerome straps dynamite to their
necks and tells the crowd that the two empty seats are for his guests of honor
and if he doesn’t get what he wants – he will blow the heads off of the mayor
and his associates. Jerome looks into a reporter’s camera and summons Jim to
come to the festival. While this is happening, Fries and Scarecrow break into a
chemical lab at Wayne Industries and force the chemists to create a bunch
more of the laughing gas.
Jim gets to the stage and Jerome tells him that the two
empty chairs are for Bruce and Jeremiah. Jim refuses to hand over Bruce and
volunteers himself as tribute instead. Jerome is clearly frustrated at Jim’s
lack of cooperation and realizes he needs to send a message to let Jim know how
serious he is – which he does by blowing up the head of one of his hostages. Jim,
Lucius, and Harvey go to round up Bruce and get to Wayne Manor as Bruce and
Selina are sharing another precious moment. Jim lets Bruce know that Jerome has
requested his presence. The GCPD’s plan is to have Bruce carry a device on him
that disrupts the signal from the detonator to the bombs strapped around the
hostage’s necks. This will buy the GCPD snipers enough time to take
out Jerome and his crew. Obviously Alfred is vehemently against Bruce going,
but Bruce knows that the hostages need his help and agrees to the plan. 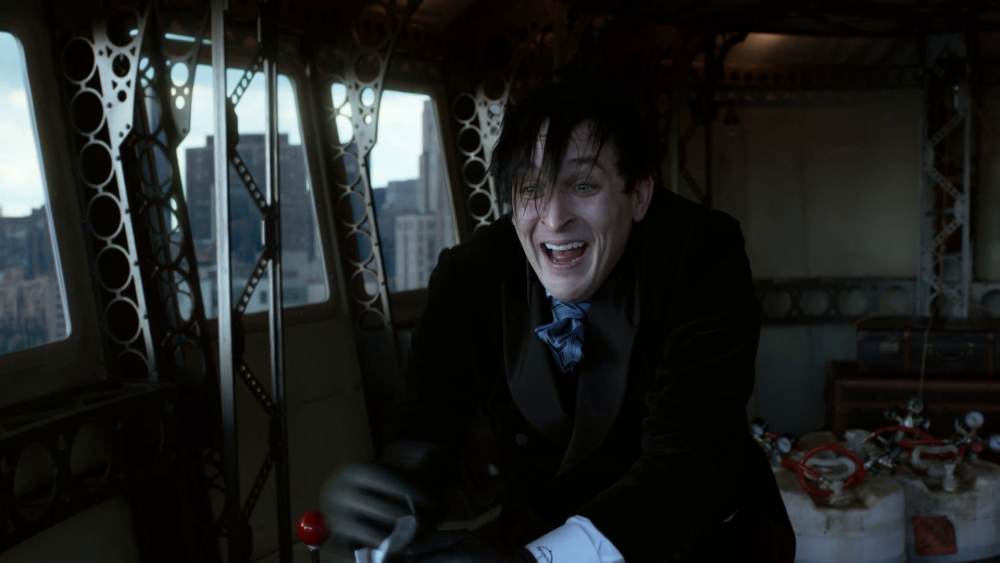 The group then goes to visit Jeremiah who is not nearly as
willing to join in GCPD’s effort as Bruce was. Bruce finally convinces Jeremiah
to help with some inspirational words about standing up to terror being the
only way to take its power away. Bruce and Jeremiah get to the music festival
and as they approach the stage Jim orders the snipers to fire. Unfortunately
for them, Jeremiah had his men ready for this and they kill all of the snipers.
In the meantime Tetch, Scarecrow, and Penguin have gone to a hanger housing a
blimp. It seems the plan is to gather the largest crowd possible and drop the
gas on them from the blimp. Tetch hypnotizes the pilot to carry out this
mission for them. Penguin can’t take it anymore and tries to reason with
Scarecrow and Tetch to not go through with this. Turns out Jerome figured
Penguin would betray him and warned Tetch and Scarecrow of this. They knock
Penguin out and put him on the blimp.
At the music festival Jerome has Bruce and Jeremiah on stage
and is needling Jeremiah. He tells him that he is just as crazy as he is and is
also a killer – it’s in their DNA. Jerome hands Jeremiah a knife and tells him
to take his best shot. After a brief moment of hesitation, Jeremiah screams and
charges at Jerome, but he easily counters and knocks Jeremiah out. Jim sends
Harvey up to the roof to take out Jerome’s men which they successfully do. As
Jerome is distracted from the GCPD’s gunshots, Jim is able to get a
clean shot and hit him in the shoulder. Jerome races for a rooftop with Jim on
his heels. The blimp is almost at the music festival when Penguin wakes up. He
tries to convince the pilot to turn the blimp around but Tetch’s hypnosis is
too strong. Penguin calls Jim who tells him to overtake the pilot and steer the
blimp towards the river. 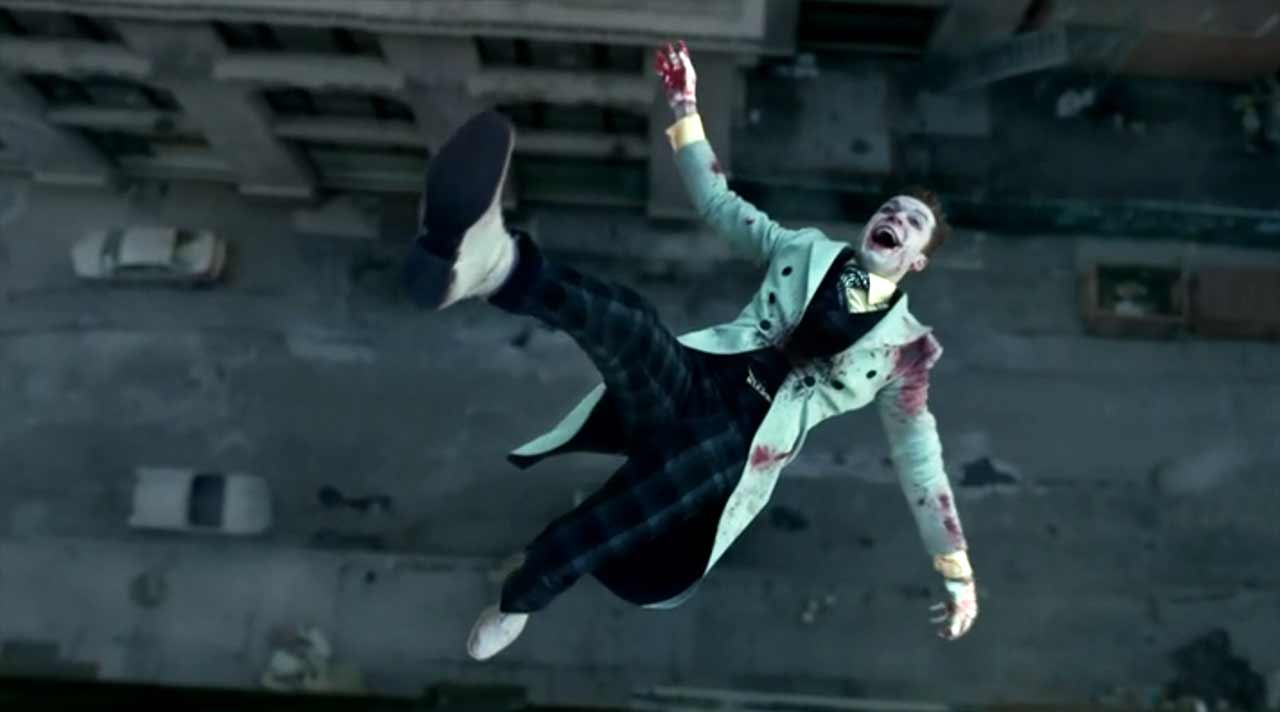 Jim gets to the rooftop and sees that Jerome is standing on
a ledge with his phone out. Jim warns Jerome to stand down, but Jerome calls
the pilot and tells him to drop the gas. Jim shoots Jerome twice, once in the
arm and once at center mass leading to Jerome falling off the side of the
building. Jim peers over the ledge and sees Jerome hanging on to a pipe. Jerome
asks Jim is he’s going to be a lawman and pull him up to arrest him or if he
will be a murderer and let him fall and die. Jim reaches for Jerome’s
outstretched hand to pull him up but Jerome pulls his hand away and decides to
take the quick way down to street level. Inside the blimp Penguin does manage
to attack the pilot and knock him out before he can release the gas. 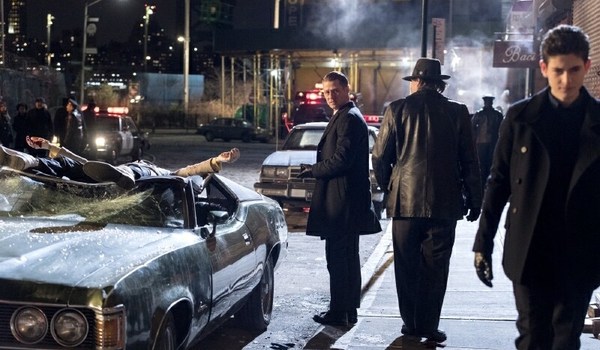 On the street Bruce, Harvey, Jim, and Jeremiah all go to
Jerome’s lifeless body. Jeremiah begins to walk away, but Bruce stops him and
tells him that Wayne Enterprises would love to fund his work. Jeremiah accepts
and heads back to his place. At his house, Jeremiah is surprised to see a
present on his desk from Wayne Enterprises. When he unwraps it, he sees that it
is a jack-in-the-box that pops open and sprays him with the laughing gas. He
hears Jerome’s voice telling him that this batch of gas was made specially for him and it is time to have some fun. 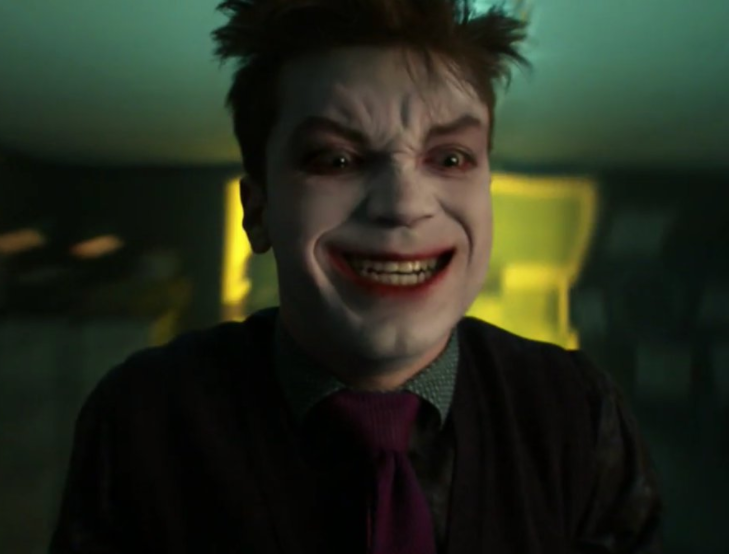 Well this was just awesome. I thoroughly enjoyed everything
that happened in this episode. From the little things like Jerome’s hilarious interactions
with the crowd at the concert to the awesome freeze balls that Fries busted out
to the enormity of us finally getting Joker in the Gotham universe, this episode was perfect. I love that the writers
figured out a way to still have Cameron Monaghan portray the clown prince of
crime. He was fantastic as Jerome and he will be amazing as the Joker –
I’m sure of it. I cannot wait to see how this plays out in the coming weeks.
Barbara’s Continued
Rise to Power story arc: “I am the one true heir of an immortal god’s ancient
dynasty – and I don’t dirty my fingers with the likes of you anymore” –

During this episode we also get a peek at what Barbara has
been up to as the head of the League of Shadows. At Club Siren a gang leader is
confronting Tabitha and Barbara comes to rectify the situation. Before the gang
leader and his men can fire at Barbara and Tabitha – ninja stars come flying
out of nowhere killing the men. The members of the league want Barbara to
continue Ra’s legacy and not have them just stay in Gotham. Tabitha clearly
doesn’t like this idea or where this is heading, but Barbara is drunk with
power. 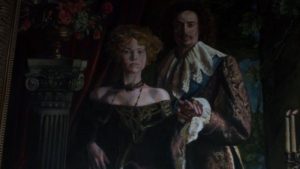 The head of the league of shadows women who has “supported”
Barbara becoming the demon’s head takes her to a house Ra’s owned in Gotham
since the city existed. This house is apparently filled with ancient secrets. In
the house is a locked door that none of them can get into. The woman takes Barbara
to the door and as they approach it, Barbara’s hand begins to glow as does the
door. The door opens for Barbara and inside are multiple ancient artifacts. At
the very back of the room is a painting of a woman that looks exactly like
Barbara – solidifying again in her mind and that of the remaining league
members that she is the chosen one to lead them.
Barbara looks through the room and begins reading a
book chronicling Ra’s legacy for the past nine centuries. Tabitha tries to
convince Barbara that Ra’s was a cult leader and that the league is all
brainwashed. Barbara dismisses this notion. The two of them argue about the league
and Barbara has had enough of Tabitha. She has her loyal servants throw her out,
seemingly ending their professional partnership. The three woman take Tabitha
out to the street and tell her to leave Gotham. She refuses and a fight
ensures. Tabitha holds her own for a bit, but gets over-matched. A mysterious
stranger comes and helps Tabitha up. They tell her that Barbara is an imposter
and they serve Ra’s al Ghul who’s death is only an illusion.
My thoughts:

I feel like the woman that is serving as the mouthpiece for
the league’s female soldiers has ulterior motives and wants to control Barbara – well she clearly doesn’t know Barbara. It’s a shame that Barbara
and Tabitha’s relationship is fractured, but there is a chance it can be
reconciled in the future. I don’t see Barbara’s place at the head of the League
of Shadows lasting very long. I think she will be stripped of the title soon and go back to working the Gotham underground as she has previously done with
Tabitha and Selina.
Next week on Gotham:
Barbara gets visited by a mysterious stranger who saw a
vision of a cataclysmic event. The men that took Tabitha kidnap Bruce as well
and it looks like Ra’s might not be so dead after all. Riddler is back in that
action and we might get a Bruce and Selina make out sesh!