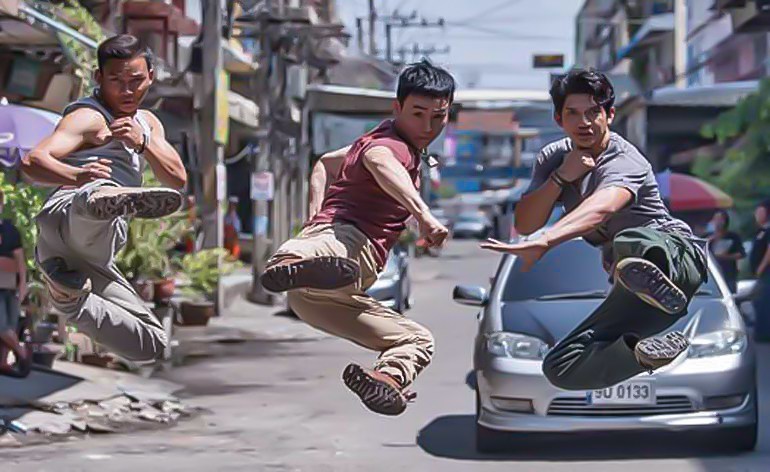 I’d like to be able to say that Triple Threat is the martial arts powerhouse fans of the genre have been waiting for, but with a cast that includes Iko Uwais (The Raid), Tony Jaa (Ong Bak), and Tiger Chen (Man of Tai Chi, The Matrix), chances are fans were expecting a lot more than it actually delivers. It is disappointing, to put it mildly, to have so much talent wasted in an actioner so pedestrian it could’ve starred anybody else and been just as mediocre.

Directed by Jesse V. Johnson, whose claim-to-fame might be the unwanted sequel to Green Street Hooligans, the film makes the least possible use of its trio of ass-kicking stars. What passes for a story follows Payu (Jaa), whose wife is murdered by assassins while working at a secret MI6 site in Thailand. The team of hitmen are led by Devereaux (Michael Jai White), who kill everyone in sight in order to free the terrorist Collins (Scott Adkins), so he can rejoin their squad. Along the way they also betray peaceful members Jaka (Uwais) and Long Fei (Chen), leaving them for dead in the burning camp. This sets the vengeful trio on a collision course with Devereaux and Collins, who are also trying to assassinate a wealthy heiress (Celina Jade) with plans to implement an anti-crime bill.

Ugh. Too much plot.

Keanu Reeves had it right. When he made his directorial debut Man of Tai Chi and enlisted some of the world’s best fighters and stunt choreographers to be part of it, he developed a storyline in which the battle was EVERYTHING. Because he knew that anybody who bothered to seek out his film wanted to see these people go toe-to-toe. Triple Threat is first and foremost a shoot ’em up, which is contradictory to everything we want to see from Uwais, Jaa, and Chen. And even those gun battles are flatly staged and unimpressive. We do get occasional bouts of solid hand-to-hand combat in the midst of other gunfights but it’s not nearly enough, nor is Johnson the right director to shoot them. His experience as a stunt coordinator has never crossed over into his work as a director, which is a shame exactly because of a movie such as this. Makes you wonder how things might have gone if John Wick director Chad Stahelski had stuck around. Meanwhile, the script credited to Joey O’Bryan, Fangjin Song, and Paul Staheli proves to be a mouthful for the inarticulate cast.

Triple Threat is forgettable at best when it should’ve been so much more. Watching it you’ll probably spend most of the time thinking of better ways to get the most out of Uwais, Chen, and Jaa. Hopefully another movie will come along someday that will do it.