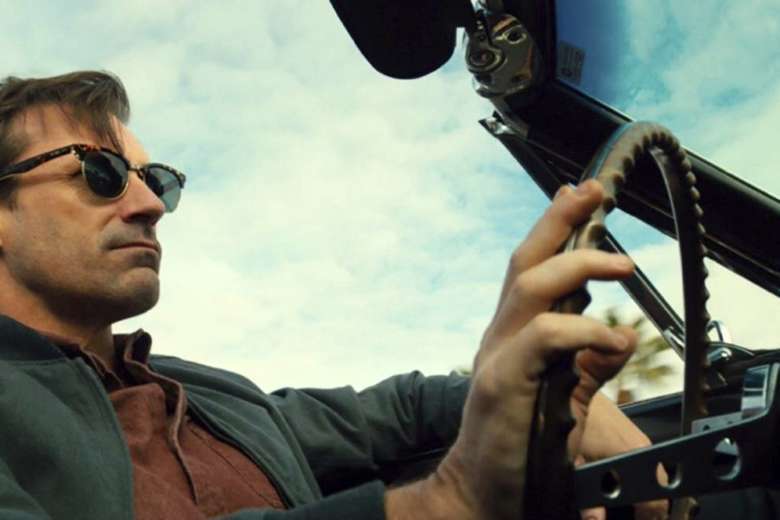 You could be forgiven for having forgotten much of Jon
Hamm’s filmography. Yes, there was last summer’s Baby Driver, in which Hamm effectively
went super-sinister and rocked a side-buzz haircut in a sexually thrilling way
I didn’t expect. But there was also Keeping Up with the Joneses, before Gal
Gadot was Wonder Woman; and his voice acting in Minions, which, whatever, fine;
and Million Dollar Arm, that Disney movie about Indian teens playing baseball
that no one saw; and his FBI agent role in The Town, in which he was
overshadowed by practically every other cast member.
It’s not that Hamm is bad, but that his Don Draper shadow
stretches so far—so he finally decides to lean into that with Nostalgia.
Remember that scene in the season one finale of Mad Men where Don Draper
pitches “the carousel,” talking about nostalgia and the twinge in the heart?
That speech is basically what Alex Ross Perry’s latest film is, but stretched
out to an unnecessarily long runtime. Hamm is solid in it, and fellow cast
members Bruce Dern, Ellen Burstyn, Catherine Keener, and John Ortiz are
expectedly great. But this movie shouldn’t have been two hours.
The film’s tagline is about “life, love, and the things we
leave behind,” and so the movie examines three short narratives that link
together by shared characters. What do these three arcs tell us about our
possessions, how we treat them, and what memories are captured by them? The
film opens with insurance agent Daniel (Ortiz), who speaks almost wondrously of
his profession (“Every story has details I’ve never heard before. Every person
I talk to, I learn something new. Not many people get to say that about their
jobs”) when he meets Helen (Burstyn), a woman who has lost the house she shared
with her late husband in a fire. Helen chose to save a baseball that was
beloved by her husband, but faced with the awful devastation of the fire, she
considers selling the ball, leading her to sports memorabilia dealer Will
(Hamm). The film concludes with Will going to his hometown to clean out his
parents’ house with his sister, Donna (Keener), who sees emotional value in
items that Will can only assess practically.
Each character views stuff a different way, but the
thorough line of Nostalgia is pretty straightforward: We assign emotions to
objects to capture memories we cherish or to honor people who are no longer
with us. That’s not a particularly new idea, but it is one that Burstyn, Hamm,
and Keener explore well with their characters. Still, the long runtime means the
film drags, and a late-movie plot twist feels particularly telegraphed. The
performances in Nostalgia are strong, and no movie Hamm has tackled has felt more particularly tuned to his talents than this one, but the narrative isn’t unique enough to
make the two-hour investment totally worth it.

Review: ‘The Croods: A New Age’