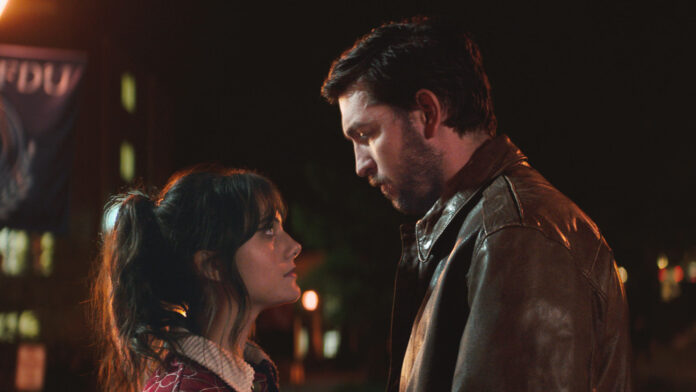 In 2017, writer Kristen Roupenian published a short story in the New Yorker that didn’t just get the attention of older white liberals. It captivated a younger audience that debated the current realities of modern dating. It was funny. It was uncomfortable. It featured one of the most awkward kisses ever written, the kind that curls your toes and makes you cringe.

Director Susanna Fogel’s adaptation of Cat Person has a similar effect. When we meet our 20-year-old protagonist Margot (Emilia Jones), she is trying to flirt with the much older Robert (Nicholas Braun) while working at a movie theater concession stand. She teases him about his rare love of red vines which he takes as an insult. Instead of taking this as a red flag, Margot continues to flirt until she gets his number, imagining their interactions along the way.

Emilia Jones gets more believable as the film goes on, but starting out, you don’t fully understand why Margot is so interested in Robert. The story expects her to be head-over-heels obsessed with this guy as we’ve seen in plenty of teen movies. Instead, Jones shows ambivalence in scenes where she shouldn’t.

As her interactions with Robert increase, his awkward and forceful nature comes to light, but not enough to throw Margot off. He is supposed to have cats after all, an endearing fact that she and her friends fawn over. This is contrasted by dream-like visuals that show her inner monologue. When he shows up at her college to drop off snacks and “locks” them in the anthropology storage closet, Margot starts to envision him in a violent light.

Encouraging her to ghost him and follow her gut is her roommate and best friend Taylor, perfectly played by the impeccable Geraldine Viswanathan. A progressive feminist who runs a female-centered subreddit, she is the voice of comedic reason, saying what we as the audience are all thinking.

Braun, who is best known as the charmingly awkward and sweet Cousin Greg on Succession, plays Robert with intentional clumsy ignorance, one that rings eerily familiar. Though he still looks a bit young for the part, his baby face shines through his beard. Braun gives a menacing and brilliant performance, one that you can’t help but watch.

When the power dynamics shift with cinema’s most awkward and long kiss, Jones settles into the part. This leads to one of the most hilariously real sex-scene that is just as uncomfortable and drawn-out as their kiss. Fogel, who co-wrote Book Smart and directed Life Partners and The Spy Who Dumped Me, is at her best in this scene, carefully choreographing each shot to create the most cringe-worthy shot. Margot goes out of body during their sexual encounter, literally talking to herself, cracking jokes and asking “Is this what you really want?” It’s a thought that many women have had throughout their dating histories, saying yes to every decision that brought them to a place they don’t want to be.

Michelle Ashford is an interesting choice to pen the script for a snappy psychological satire. His past credits include Operation Mincemeat, Masters of Sex, and the lauded biographical miniseries. Nowhere does her filmography scream, “I have the capacity to fully capture the horrors of modern dating,” but sure enough here we are.

She packs the film with many pop-cultural references from Into the Woods to Spirited Away to Kujo. Nowhere is this connection more prevalent than in Robert’s worship of Harrison Ford, one that Margot just can’t understand. Some of her best work is done dismantling our culture’s idea of romance.

The end of the short story appears about 70% of the way through Cat Person, leaving Fogel and Ashford to take the story to an absurd but frightening pace. Whether this ending works is debatable, as the moral ambiguity Roupenian established in the short is less murky here.

Like Promising Young Woman and Fresh, the film premiered at the Sundance Film Festival. Portraying similar themes and tones, Cat Person explores the same ideas of “the nice guy” and consent in a more grounded way. Despite its small missteps, the film not only has bite, it has claws.