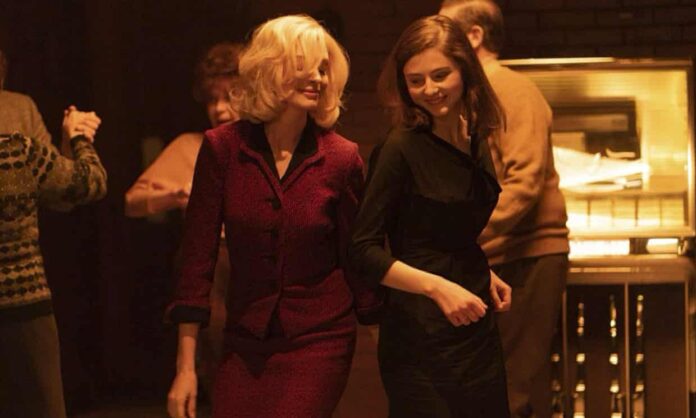 There’s no easy way to describe William Oldroyd’s deliciously-twisted genre-bending thriller, Eileen. It will almost certainly strike different kinds of people in different ways, because it is never what it appears to be on the surface. Some will love that about it; there’s a cat-and-mouse game that Oldroyd is playing with the audience. Is the film an underdog story about a mousy, invisible girl who finally decides to grab life by the horns? Or is it…well, something much darker?

Why can’t it be both? Eileen, based on the novel by Ottessa Moshfegh, is messed-up for all of the ways it hides its true nature. For sure, it is about a girl coming into her own, and that would be the titular Eileen, played by Thomasin McKenzie. She muddles through a bland existence in 1960s Massachusetts, working as a secretary at a prison for boys. The few joys she gets are of her own making. A serial masturbator, we see her getting off (and fascinating about being taken by a guard) a few times early on. Her drab world is even worse at home, where she takes care of her alcoholic father (Shea Whigham) who never has a kind word to say.

In like a whirlwind is Rebecca (Anne Hathaway), a tall, leggy, and smart blonde working as the prison’s resident psychologist. The men can’t take their eyes off of her, or control their pervy comments. But Eileen is just as smitten, especially when Rebecca takes an interest in her. What could this big-city woman possibly want with a little old nobody like her? The attention is exciting, but also liberating. A night out at the bar, with many of the town’s men watching, Eileen and Rebecca are off in their own little world, drinking and dancing with delight. There’s a sharp elbow to the face for any man who tries to get in the way.

Oldroyd knows what he’s doing. With soft lighting you want to luxuriate in, Eileen gives the impression of more darkly-comic version of Carol. This is somewhat familar terrain for Oldroyd, who made a splash a few years ago with his dynamite Lady Macbeth, another film about women acting against societal expectations. It’s unclear where each woman stands in their feelings towards the other. Is Rebecca truly smitten with her much-younger, more naive new friend? And what does Eileen want from Rebecca? Love? Companionship? Or just a window of freedom from her grim everyday life?

It can be frustrating the distance we’re kept from Eileen and Rebecca, but it does make for an intriguing power dynamic between the two. Rebecca is such a force of nature, her connection to Eileen is always in question. Is she manipulating this young woman or not? And to what end? There’s something going on that goes well beyond sexual tension and psychological manipulation.

The answer is a brazen, ballsy kick to the teeth for those who walk into Eileen with too many expectations based on the casting, a few promo images, and a slim synopsis. The film moves confidently away from queer romance to erotic thriller to something more. This is one of those movies that demands you go in as clear and free of spoilers as possible to fully appreciate Oldroyd’s bold take. In a key scene, Whigham’s cruel character lays everything on the table to Eileen. There are people out there “making moves, the ones you watch”, and there are others “just filling space.” Eileen isn’t a movie that’s comfortable just filling space, being what others might want it to be. It’s a film that is here to make moves, to demand your attention.