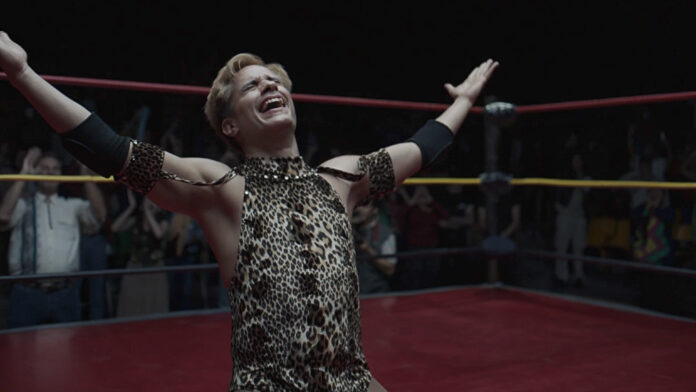 Professional wrestling is a global form of entertainment, and every culture has their unique version of it. But one thing you can count on no matter where they grapple, it’s an especially masculine sport with a…complicated view of homosexuality. In the Mexican world of Lucha Libre, queer performers, or exoticas, are there to be humiliated, always to lose and look bad doing it. But that was before groundbreaking queer wrestler Saúl Armendáriz came along and, through sheer force of will and unshakeable confidence in himself, began to change the culture.

Saúl’s story is captured with all of his unbreakable spirit, fabulous humor, and nifty wrestling in Roger Ross Williams’ joyous film, Cassandro. Gael García Bernal gives a career-best performance as Saúl, a Lucha Libre performer who is sick and tired of being the masked loser El Topo. He’d rather be himself, all of himself; but to do that would be to  flaunt his homosexuality to an audience long-taught to hate people like him. Williams, an Oscar-winning documentarian and Sundance veteran who was last here with 2016’s Life, Animated, takes us right into the spectacle, the ritual, and the homophobia of Lucha Libre.

But that aspect of the sport, Lucha Libre literally translates to “freestyle wrestling”, was never for Saúl. When not in combat, he flaunts his sexuality openly, dismissing the macho dudes who haunt the same bars and have no problem launching into gay slurs. Saúl’s sense of self-confidence is unshakeable, something he gained from his mother Yocasta (Perla de la Rosa), who has spent years enduring the judgment of others for the long-running affair she had that produced her son.

So Cassandro works as both a terrific mother-son underdog story, and a powerful expression of LGBTQ confidence in a culture steeped in rigid gender roles, religious fanaticism, and hyper-masculinity. The thing about Saúl is that he doesn’t just want to be a twig getting pummeled by his ox-life opponents. He wants to tell stories, to bring a bit of poetry to Lucha Libre. So he partners up with Sabrina (Roberta Colindrez) aka Lucha star Lady Anarquía, to learn a new way to fight as an exotica.

Lucha Libre and American wrestling share a lot of the same biases when it comes to queer representation. The difference is that we’ve frequently had male superstars who tapped into their feminine side, such as Gorgeous George, forcing the male-dominated audience to confront their feelings. In nearly all of these cases, the wrestler is portrayed as a villain, or a heel, someone to be hated. But in the case of Cassandro, the flamboyant personality that Saúl adopted, he was too good to be hated for long. He proves such an impeccable showman with unmatched charisma and silliness, that even those who wanted to hate him would soon begin chanting his name. The first rule of any wrestling promoter is to listen to the fans, and it isn’t long before Cassandro, an exotica, is winning matches left and right. This is not only unheard of in Lucha Libre, it’s also dangerous and threatens to put Saúl in danger from those who aren’t ready for this kind of cultural shift.

As Cassandro grows more popular, it becomes harder to keep Saúl’s biggest secret. That’s the sexual relationship he has with married luchadore Gerardo (Raúl Castillo) aka El Comandante. Some of the film’s most poignant, and smolderingly sexy scenes are between Saúl, who is comfortable in his sexuality and wants a partner to match, and the closeted Gerardo who wants to keep his family and livelihood. Both would vanish in a heartbeat if the secret ever got out.

All of the relationships that Saúl has are nurturing in some way. The closeness between him and Yocasta is almost more sibling-like than mother and son. They have their own language, share the same cigarettes, watch the same telenovellas, and also have some of the same vices when it comes to men. There’s also a really fun, flirty friendship with shady promoter’s son Felipe, played by rapper Bad Bunny, that yields some interesting turns. Bad Bunny’s role here is bigger than it was in Bullet Train and he continues to show that he can do no wrong it seems.

So how about the in-ring action? Williams, who profiled Saúl years ago on another project, really gets a handle on the energy and dazzling athleticism that is so central to Lucha Libre. Bernal is in fantastic shape, too; he’s a small, wiry ball of lightning and fabulousness, performing hurricanranas and moonsaults with apparent ease. Wrestling fans watching closely will be more than satisfied by what they see between the ropes, and in Williams’ presentation of the men and women who call Lucha Libre their life. There is throughout Cassandro a deep respect that shines through in the details.

Williams’ script, which he co-wrote with David Teague, fails to show how deep the resentment for Cassandro really went. It’s teased early and often, but nothing ever really arises from it. Instead, the focus is on keeping the film light-hearted and uplifting. The crowd takes to him easily and without much fuss, which doesn’t feel genuine.

Of course, this being a wrestling movie, there has to be a climactic showdown. Cassandro reaches the pinnacle with a main event bout in Mexico City against El Hijo del Santo, son of the legendary luchadore El Santo. This personal and professional highlight means a bit more for Saúl, who harbors bittersweet memories of watching El Santo matches with his father. Being recognized and respected by the Son of Santo, who represents all of the cultural intransigences that will prevent Cassandro from being champion, is more of a reward than victory could ever bring.

While Williams hammers the film’s theme a bit hard in the final moments, Cassandro is never less than a moving tale of queer triumph in the face of bigotry, and a dynamic powerhouse of athleticism and theatricality.