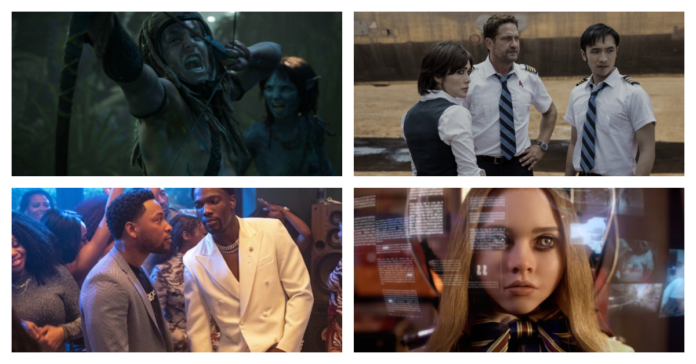 The question after five weeks is how long can James Cameron’s Avatar: The Way of Water keep up this pace? The $31M weekend equates to only a 32% drop, while the $38M 4-Day for the MLK holiday is even better.  Right now, the film ranks 13th domestically, while the $1.9B worldwide total has it creeping up on Spider-Man: No Way Home‘s $1.92B for sixth place all-time.

In a win for adult-skewing films, A Man Called Otto continues to play to big audiences as its theater count rises. The Tom Hanks-led dramedy about an old grouch contemplating suicide, earned $12.5M over the weekend is expected to top $15M over the holiday.

Gerard Butler still holds a lot of sway with audiences looking for a good time at the multiplex. Plane, his latest action flick co-starring Mike Colter and Daniella Pineda, beat projections with $10M, with a potential $11.6M over the MLK holiday. I disliked the film quite a lot, but overall the reviews have been very good both with critics and audiences alike.

It was no Kid ‘n Play kick-step for the House Party reboot, although the $3.8M weekend and projected $4.5M 4-day is in line with expectations. The redo of the 1990 party classic, now led by Jacob Latimore and Tosin Cole, was originally an HBO Max exclusive before the new regime at Warner Bros. Discovery decided on theatrical. Probably a good idea.