Home News Marvel Review: ‘The Guardians Of The Galaxy Holiday Special’Mantis And Drax Are A...
Facebook
Twitter 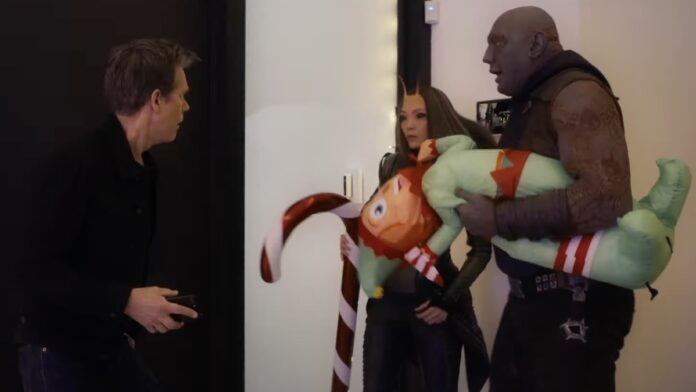 It’s easy to overlook James Gunn’s films as intentionally vulgar, violent, and goofy, but what people ignore is that he’s quite good at hitting the big emotions when he wants to. That has never been more apparent than with the Guardians of the Galaxy, a team of misfits and outsiders who have come together through mutual feelings of loss and abandonment. While this is often played for comedic effect, the Guardians of the Galaxy Holiday Special (streaming now on Disney+) plays with this idea in a way that balances plenty of Christmas humor with an equal amount of genuine emotion.

Of course, this being the Guardians of the Galaxy, it’s all done in the silliest way imaginable. The theme of “loss” is reintroduced in a flashback involving Star-Lord/Peter Quill (Chris Pratt), Kraglin (Sean Gunn), and the late Yondu (Michael Rooker), told in animated form. We know that Quill was stolen away from Earth as a boy, but we never quite considered what that meant for him. Yondu being an alien has no idea what Christmas means, and we see him trash the holiday and the very notion of giving away gifts. This has left the adult Star-Lord a bit lonely around the holidays, compounded by his grief over the death of Gamora.

Gunn has often talked about wanting to a Mantis (Pom Klementieff) and Drax (Dave Bautista) team-up of some kind, and he gets his wish here. The two come up with the madcap idea of heading to Earth and kidnapping Kevin Bacon, Quill’s favorite actor, and presenting him as a Christmas gift. And so…well, they do. Hollywood greets them with open arms and loads of cash, but also a journey to a gay club and an eventual tussle with the LAPD. But they get their man, abducting Bacon from his own home and whisking him away to Knowhere.

This is all pretty light-hearted in the way it plays out, but the best part is that we get to see most of Mantis that we’ve ever seen. She sorta joined the team by accident and just sorta stuck around, but has never been given the spotlight. Mantis drives the action forward here, and we see how playful and irresponsible she can be, qualities that make her feel more like part of the team. Klementieff has never gotten her due since joining these films and it’s good to see her shine. We also get confirmation of a big secret about Mantis (although first revealed in Marvel Studios: Legends) that changes the dynamic heading into Guardians of the Galaxy Vol. 3, which could be the last time we see the team together.

Working from an obviously limited budget, Gunn and his team find fun and clever ways to keep the VFX to a minimum. Rocket (Bradley Cooper) only has a minor role. The same goes for Nebula (Karen Gillan), and Groot (Vin Diesel), the latter looking more like a costumed character seen at a Disney theme park. We even get our first real time spent with Cosmo the Russian space dog, voiced by Maria Bakalova.

The thing that has truly tied all of these Guardians movie together are the jokes, though, and at just 45-minutes long this special is packed full of them. Drax is a riot, as always, and there’s a great running gag about how awful and repugnant actors are. The disgusted look on Mantis and Drax’s faces when they realize Kevin Bacon is *gasp* an actor is priceless. And Bacon is game for all of it, making the best use of what is probably his only MCU appearance. He even gets in a rockin’ holiday musical performance to cap things off, just like he probably would’ve done in a movie from his younger days.

The Guardians of the Galaxy Holiday Special isn’t going to alter the fabric of the MCU or anything, but if you’re a fan of the team it’s a can’t-miss Marvel episode and a perfect bridge to the next movie. With a genuinely heartwarming conclusion, plenty of classic yuletide tracks (try to get The Old 97s song out of your head afterward) and a jolly, foul-mouthed (there’s at least one cuss word) attitude towards Christmas, it’s exactly what we’d hope a holiday special from James Gunn would be. With his new job at DC Studios, the chance to see Gunn operate in the MCU are running short, so consider this one a pleasant gift.