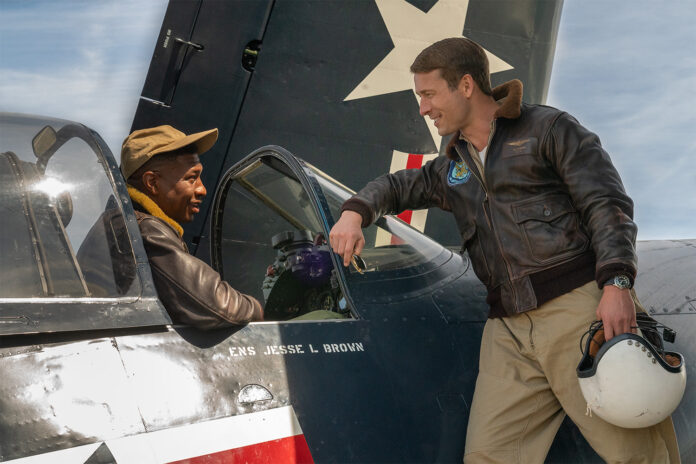 NOTE: This review was originally part of our Middleburg Film Festival coverage. Devotion opens in theaters on November 23rd.

African-Americans and war have a complicated history. Some don’t see the point in fighting for a country that was literally on the back of slaves and continues to practice in systemic racism. Others felt differently, and risked all for that same country. Jesse L. Brown was one of those. The first Black U.S. Navy aviator’s story is told in J.D. Dillard’s rollicking, powerful war drama, Devotion, a lone wolf of a film that defies historical biopic tropes and smokes inevitable comparisons to Top Gun: Maverick.

While Brown’s accomplishments are singularly worthy of their own movie, he will always be intertwined with his friend and wingman, Tom Hudner, played by Maverick‘s Glen Powell. The title Devotion alludes to their real-life friendship, a rarity in 1950 America, and their reliance on one another when in the pilot seat. But it also speaks to the dedication Brown had with his wife, Daisy (Christina Jackson, a real find), in domestic scenes that reveal what he is fighting for and also what he is at risk of losing every time he straps in.

Devotion never unfolds quite like what you expect. The vast majority is rollicking, flyboy action. The weight of racism that Brown carries with him aren’t gone, but they are mostly internalized. Instead, we see Brown and the rest of his unit taking to the skies, preparing for inevitable conflict in Korea. While some will see the easy way that Brown gets along with white pilots as the Green Booking of history, it’s better to look at it that he has earned their respect and friendship. The prejudice he faces comes from outside. And it doesn’t stop Brown from feeling the pressure that comes with his position. When a Life magazine crew stops by to to a centerpiece on him, Brown rebuffs it, but takes jeers from others for being a circus act, anyway.

The thing about Brown is that he’s pretty extraordinary, anyway. We learn little details about him during the down times. Shore leave at Cannes brings a random encounter with Elizabeth Taylor (played by Serinda Swan, a dead ringer), and we learn that Brown speaks fluent French and can fit in with high society with ease when he wants to. The loneliness that comes with being who he remains, but Brown is a complex, fascinating figure. Hudner, who he argues with and befriends in equal measure, is a charmer, earnest sometimes to a fault, but he’s also just beginning to find himself. It’s a strong role for Powell, and I think a defining one that should propel him to more leads. Majors is extraordinary, as always, commanding the screen whether on the ground or in the air. He’s already proven so accomplished at so many different genre that it’s no longer surprising when he shines in a complex role like this. He sets the bar high and consistently nails it. Brown is a man who defied stereotypes at every turn, and Majors captures that with ease.

With blistering aerial dogfights, and a final act that’s sure to bring on the waterworks, Devotion does Brown’s story justice, it does justice to Brown and Hudner’s commitment to one another, and it’s an exhilarating ride. Part of me wishes it could have been released a bit later down the line, to further escape Top Gun: Maverick‘s shadow, but those who strap in for Devotion will find it to be a true ace.