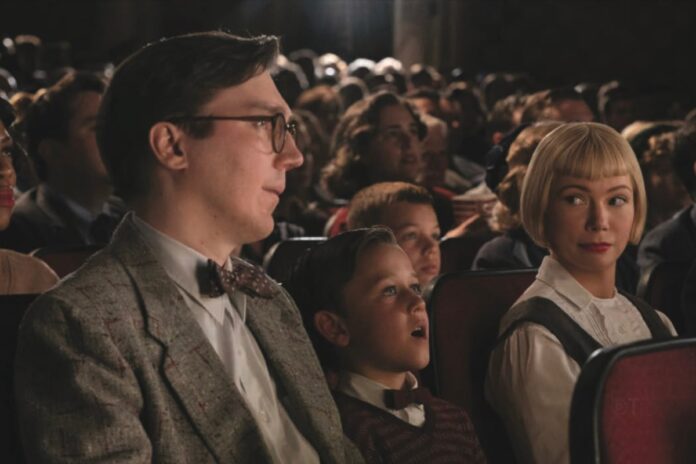 When you think of Amblin, what is it that comes to mind? If you’re of a certain age, likely it’s the nostalgic movies of your youth, stories about love, and friendship, and most pointedly; family. These themes have been central to virtually the entirety of Steven Spielberg’s filmography, some obvious and some not-so-obvious. While there seems to be a glut of movies by filmmakers telling stories about their childhood, only The Fabelmans tells one that we were actually dying to know because it’s about Spielberg and the influences that have made him so good at plucking at our heartstrings.

Spielberg has made no secret that The Fabelmans, while a fictional story, is very much inspired by his own childhood. As expected, it is a love letter to the power of cinema, but also to his Jewish family that he loved through all of the chaos they would experience. It is at times wistful and borders on being too precious, but Spielberg, who co-wrote the script with Tony Kushner, never cross that line. In fact, The Fabelmans is quite bittersweet and downright painful when least expected.

It begins looking like it’ll compete with those Nicole Kidman AMC Theatres ads in lavishing love over cinema. Young Sammy Fabelman (first played by Mateo Zoryon Francis DeFord) has gone to the movies with his parents, Mitzi (Michelle Williams) and Burt (Paul Dano). The film is the circus classic The Greatest Show on Earth, and the iconic train crash scene shocks young Sammy into a passion for model trains. But he really needs to recreate that crash scene, and so Mitzi encourages him to shoot it on camera, so as to have complete mastery of his feelings over the scene.

And from there, a passion for filmmaking is born, in such a small, subtle way. Mitzi is the one who encourages her son to follow his dream. A classically skilled pianist, Mitzi is a dreamer and a bit mercurial, but she dotes on and cares for her children. Sammy’s father Burt is supportive, but only up to a point. One of the pioneers in the field of computers, Burt is the kind of guy who is always looking forward, so as to move up and give his family everything they could ever want. But his skills are high in demand, and the family is constantly uprooted as he succeeds. From their home in Jersey, he moves them to Phoenix where they spend a period of great happiness, joined by Burt’s friend Bennie (Seth Rogen), who is also encouraging of Sammy’s talent. From there, they move to California, inching Sammy closer to Hollywood and the career we know he will eventually have. But first, he must deal with anti-semitic bullies at school, a first love with the ultra-religious Monica (Chloe East), and family turmoil that threatens to break them apart.

The Fabelmans isn’t just about Spielberg’s ascent to becoming one of today’s greatest film directors, or “picture makers” as Sammy is called by a legendary filmmaker played by someone Spielberg fans will definitely NOT expect. It’s also about the way we look back at our most powerful memories, and remember those who impacted us most. The film expands in complexity significantly in the middle portion; as fast as he upgrades his camera equipment there are new, more adult concerns in the Fabelman household.

As seen through Sammy’s eyes, we witness Mitzi’s mental instability and unhappiness in marriage to Burt. Artistry and creativity run through the family, but Burt is an engineer and doesn’t have the playful streak of Mitzi, Bennie, or Sammy’s great uncle Boris, played with pure magic by the great Judd Hirsch. Like Mitzi, Boris is also an artist; a former actor and lion tamer for the circus. He instantly sees Sammy’s talent and lust for filmmaking. But he comes with some tough advice about the cost of pursuing such a path.

The performances are all-around amazing, and this might be the best ensemble that Spielberg has ever put together. LaBelle is sure to be a breakout star as Sammy, who is dealing with the usual swirl of teen emotions but also this genius-level talent that most kids his age don’t have to carry with them.  The casting of Williams and Rogen is brilliant. I don’t know if this was a factor beforehand or not, but they starred together previously in Sarah Polley’s Take this Waltz and had incredible chemistry there, and they have it here in measured doses, as well. Dano is one of the most refined actors around, and he can bring you to tears with one quivering, sad smile. I don’t want to overlook Julia Butters as Reggie, one of Sammy’s younger sisters. She’s always fighting for attention in a film that is jammed with big, stellar performances, but makes the most of what she gets just as she did in Once Upon a Time in Hollywood.

As Sammy’s senior year comes to a close, the prom draws near, and bullies start getting their comeuppance, that’s the only time The Fabelmans stars to feel a bit artificial. But even this is a calculation by Spielberg, teasing some of the Hollywood dramatic flair that he would soon become a master at. While it may not be a special effects spectacle or a gigantic studio blockbuster like we’ve come to expect from Spielberg, The Fabelmans is must-see viewing for anyone who has ever loved a Spielberg movie. And if you have aspirations of becoming a “picture maker” yourself, you should already be lined up at the theater.

The Fabelmans opens nationwide in theaters on November 23rd.