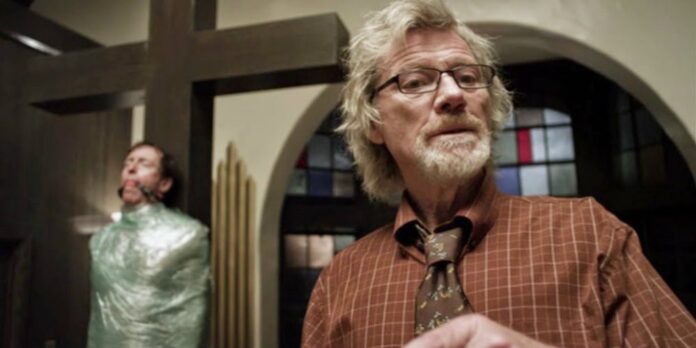 According to Slashfilm who were in attendance at an Austin, TX screening of Clerks III, Smith revealed that Lionsgate has asked him to do Red State 2…

“(Lionsgate was) like, if we do this, would you do it again? And I was like, yeah, in a heartbeat. […] I mean, obviously, Michael Parks is gone. But it’s just a story of crazy people with guns and shit like that. As long as I could use John Goodman again, I could make a hundred f*cking Red States. And I’m like, let’s do it. So we’re gonna make one.“

Smith’s relationship with Lionsgate has been a long and fruitful one. The two collaborated on the distribution of Clerks III, as well.

This does come as a surprise, though. Red State was generally well-received, but it didn’t leave much of a cultural imprint. Even among Smith fans, of which I am definitely one, it’s seen as something of an odd detour. Not quite on the level of Tusk (which Smith is also planning a sequel to) or Yoga Hosers (which Smith is thankfully not doing a sequel to), but still out of his comfort zone and field of expertise.

That said, the rise of right-wing extremism in this country does make the idea of a new Red State a tantalizing one. And if anybody can find something funny to say about such a dangerous movement, it’s Smith.