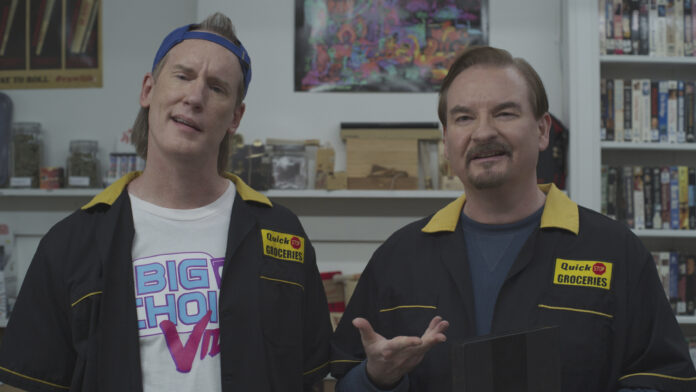 If you happened to check out my recent interviews with Kevin Smith and the cast of Clerks III, you already know how much these films mean to me. So excuse me if this review is a bit more gushing than usual. Since the first Clerks debuted in 1994 and set the world of independent movies on fire (seriously, Smith is up there with Spike Lee in that regard), I’ve watched him grow as a filmmaker and as a storyteller, maturing in that way as I matured as a consumer of cinema. At the same time, we both still liked our dick and fart jokes, our ridiculous arguments about Star Wars, and had our hang-ups about women. The best thing about Clerks III is that it rewards everyone who has been around from the beginning, with a payoff that is satisfying, hilarious, nostalgic, and oh so bittersweet.

Hard to believe that nearly 30 years have passed since Dante (Brian O’Halloran) was first called in to open up the Quick Stop on his day off. “I’m not even supposed to be here today!” has given way to store ownership, along with his lazy best friend Randal (Jeff Anderson). Hetero lifemates Jay (Jason Mewes) and Silent Bob (Smith) have turned the video store into a marijuana dispensary, which makes just perfect sense.

In recent years, Smith has turned his life around. He had already changed his diet so as to improve his health, but it was a 2018 heart attack that made him seriously reflect on his life. If anything, all three Clerks films have been about people taking stock of life. And of course, you’re going to feel differently about that depending on what stage you’re at. When Randal himself suffers a heart attack, he also begins the process of self-reflection, and to him it looks like he has wasted his time here on Earth. So what’s he going to do?

Yes, the production of Randal’s film is a meta exploration of Smith’s time shooting Clerks. For View Askew die-hards, characters we know and love come wandering back into the Quick Stop and it’s like being reunited with old friends. Because Dante is so crucial to the story Randal is telling, he has to be reunited with past loves Veronica (Marilyn Ghigliotti) and Emma (Smith’s real-life wife Jennifer Schwalbach Smith), with very mixed results. I’ve always loved the way these characters talk to one another about the various people in their lives, as if everyone knows everyone and the gossip that surrounds them. It still sounds so natural. When it comes to these popular New Jersey characters Smith is just a wizard at giving them dimension and depth.

There’s an inescapable melancholy surrounding Clerks III, however. For some of us, it’s the feeling right from the beginning that we won’t get to spend time with these characters again. But even within the story there are details that kick us right in the gut. I won’t spoil them here, but not there’s a pretty big one that made my jaw drop and makes Clerks II feel all the more special.

But I don’t want anyone to think that Clerks III is a downer. It’s not…for the most part. Randal is just as rude and obsessive and angry as ever, which makes his being stuck in a hospital being cared for by a frustrating doctor who doesn’t understand The Mandalorian (played by Amy Sedaris) a perfect torture for him. There’s also the return of Trevor Ferhman as Elias, who undergoes a radical religious transformation that gets funnier with each subsequent appearance.

Fans of this site know that I haven’t always been as invested in certain phases of Smith’s career. The further he got away from View Askew, this perfect little cinematic universe that only Smith could do, the less effective I felt he was. But even within View Askew there are different flavors to enjoy. While all of the films are funny in their own way, there’s a big difference between the wacky Jay and Silent Bob comedies, the more thoughtful (although now a bit problematic) Chasing Amy, and even something like Dogma. Clerks, I felt, was always right in Smith’s sweet spot as a film with just as many lessons to impart as it has jokes about sex.

This film was a long time coming. Smith has started and stopped on this one so many times over the years it had become a running gag among me and my friends.It’s a shame that it took a near-death experience for him to finally crack the story he wanted to tell. But what a story it is. And I mean the overall story that began with Clerks and now likely ends 28 years later with Clerks III, by far the most mature and emotionally impactful film that Smith has ever done. It’s the kind of movie that a filmmaker might want to wrap-up a career on, being able to look back fondly and say they had said everything that needed to be said. But as a Smith superfan, I hope that he still has a lot more to say within this universe and from these characters. I recall the old spraypainted Quick Stop sign “I Assure You We’re Open!”. I’m not ready for the shop to close its doors for good. Not yet.