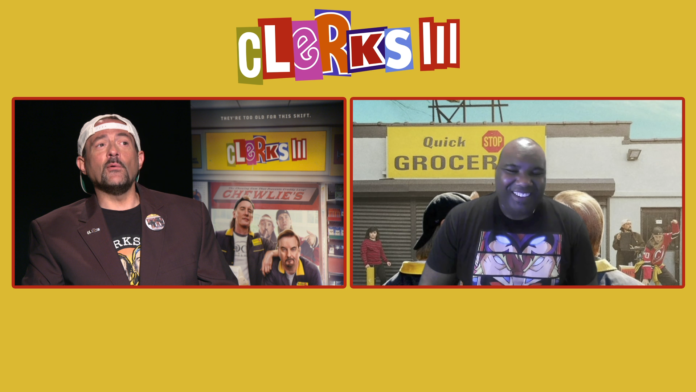 Kevin Smith is a few years older than me, but we are essentially kids of the same generation. We really came of age in the ’90s, worshipped at the altar of Star Wars, and hated the menial little jobs that prevented us from…I dunno, whatever our idea of greatness was at the time. Although our backgrounds are very different, the humor and truth in Smith’s 1994 classic, Clerks, hit me like a thunderbolt. I’m not the only one. The independent cinema phenomenon became a favorite to millions who felt the same as I did. And now nearly 30 years later, Smith wraps up his trilogy with Clerks III, a film that is arguably the most personal of all for the filmmaker, as it not only shows his evolution as a person but reflects his view on life after a major health crisis.

It’s safe to say that in my pantheon of favorite directors, Kevin Smith is very high on the list. Clerks, its then-unexpected sequel 2006’s Clerks II, and finally Clerks III which opens this weekend, were all informed by Smith’s various life experiences and worries. In the first movie, Dante (Brian O’Halloran) is called in to work an unwanted shift at the Quick Stop (“I’m not even supposed to be here today!”) and deals with an endless stream of unruly customers, his lazy movie-obsessed pal Randal (Jeff Anderson), and the iconic stoners Jay and Silent Bob (Jason Mewes and Smith himself). Randal deals with worries about his dead-end job, troublesome matters of love, and more. In the sequel more than a decade later, Dante, now working at a Mooby’s fast food joint, still frets about living a life unfulfilled and a surprising love triangle.

In Clerks III, Dante is much older now and back at the Quick Stop, which he now owns. But he has many of the same fears as before, which are exacerbated by a heart attack that makes him finally take stock of his life. Smith, who suffered a nearly fatal heart attack in 2018, was driven to write this story after the crisis he experienced.  The result is a film that is more sobering than others, but just as funny with Smith’s trademark brand of pop culture wit and raunch.

I had the pleasure of talking with Kevin Smith about Clerks III, and I’ll be honest this was a real honor for me and that’s made pretty clear when you see it. The thing that surprised me most was how humble Smith was about his longevity in this Hollywood business, and how genuinely thankful he was that he has amassed so many fans who have stuck with him. Myself included.

I also had the opportunity to speak with the rest of the Clerks III cast, including stars Brian O’Halloran, Jeff Anderson, and Jason Mewes. Like Smith’s Silent Bob, the characters of Dante, Randal, and Jay have grown to be very important in the lives of many people, and I wanted to talk with them about what it’s like to mean so much to so many.

Check out my interviews with Kevin Smith, Jeff Anderson, Brian O’Halloran, and Jason Mewes below. Clerks III opens in theaters on September 13th.