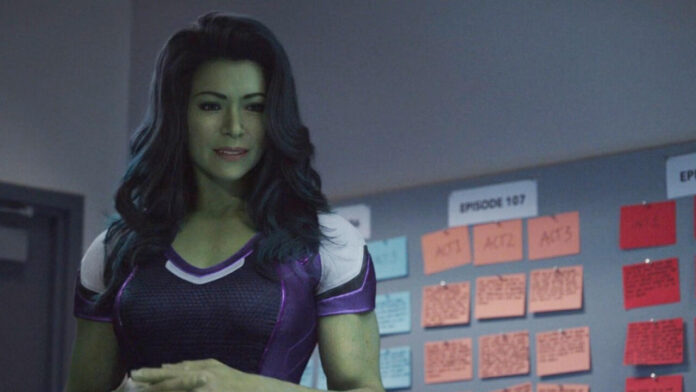 Marvel’s She-Hulk finale was pretty wild, upsetting the trends we typically see from these episodes. It was definitely the intent to have fun subverting out expectations, and while that’s certainly led to a split reaction from fans, there’s one thing I think most can agree was pretty cool.

Rumors have swirled for, let’s face it, years that the MCU might get a certain new addition to the Hulk family. No, not She-Hulk, but Skaar, the son of her cousin, Bruce Banner aka the Hulk.

During the season finale, Hulk returned from space for what looked to be an insanely over-the-top battle royale involving the Abomination, the Intelligencia, a beefed-up HulkKing, and even Titania. Then Jen Walters took it upon herself to bust into Marvel HQ and confront Kevin…no, not Kevin Feige, but K.E.V.I.N., the computer system that creates all of the storylines.

Instead, things closed with a peaceful Banner family BBQ. That’s when Bruce makes his return to Earth and reveals that he has brought with him his son, Skaar. Stargirl actor Wil Deusner plays Skaar in the series, and presumably he’ll be part of season two? Who can say.

In the comics, Skaar is a badass. He debuted during the Planet Hulk storyline, and is the son of Hulk and the extraterrestrial Caiera. He also appeared during the World War Hulk storyline, and was also part of the Dark Avengers team. I honestly can’t tell what direction they’re going for. Fans have been crying for both of the aforementioned stories to be adapted for so long, and maybe it’s about to happen in a televised format?