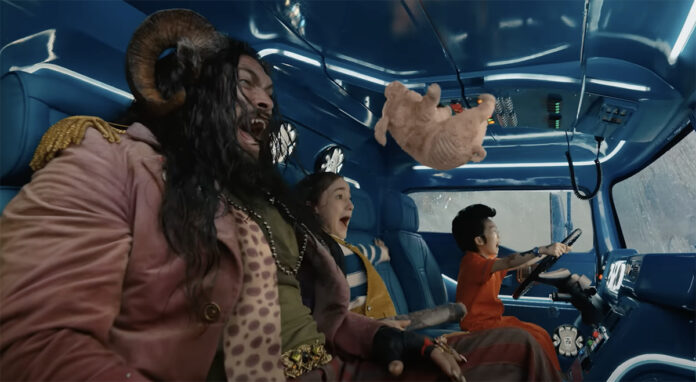 Netflix doesn’t want anyone to sleep on their upcoming fantasy adventure, Slumberland, so they’ve dropped another trailer featuring star Jason Momoa! In the film, he plays Flip, a half-man, half-beast who escorts a young girl named Nemo through a dreamworld where anything can happen. The film is directed by Francis Lawrence, known for his work on The Hunger Games franchise.

Winsor McCay’s comic strips Little Nemo in Slumberland are the basis for the adaptation, but there has been at least one significant change. The lead character is now a girl, named Nema, and played by Marlow Barkley. Otherwise, the story seems pretty much intact.

Eleven-year-old Nemo has had a magical childhood, tending a lighthouse with her father on a tiny island in the Pacific Northwest. But when her dad’s boat is lost in a storm, she’s sent to live with her emotionally distant uncle. Everything she knows and loves is ripped away from her, and Nemo’s lost and alone. Then a strange visitor comes to her in her sleep—Flip, her dad’s old partner in crime, an outlaw who’s discovered a way to break into other people’s dreams! Together they set out to find a magic pearl that can give Nemo the thing she wants most— a chance to see her dad again. They travel through the astonishing world of dreams in an adventure filled with danger.