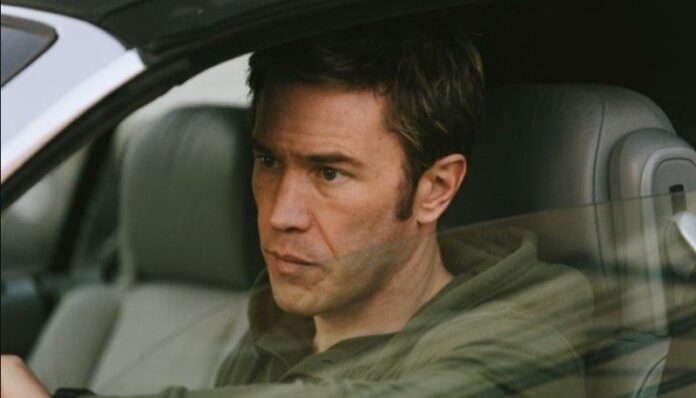 Let’s face it, we adore true crime. A minimum of 20 separate documentaries on a real-life monster who has perpetrated some heinous act are available on almost every streaming site nowadays. This generally works in the non-fiction/documentary format, which adds to the realism of the event as well, and we can’t help but absorb it in and be thoroughly immersed and engaged in whatever the story is. Naturally, there are also dramatic “based on true events” movies that make an effort to pique our interest. American Murderer, the feature-length directorial debut of writer/director Matthew Gentile, unfortunately, doesn’t work as well as a dramatic reinterpretation as it probably would in a documentary format.

Based on the true story of current FBI wanted man Jason Derek Brown, American Murderer follows Brown (Tom Pelphrey) as he transitions from conman to, well, American murderer after facing financial ruin and having to find money to settle his obligations. However, he hasn’t advanced to murder as the movie opens. He currently operates in the “small time” and runs numerous charm offensives in an effort to gain the upper hand in any given circumstance. When we first encounter Brown, he is getting ready to con a helpless man at a pawn store. Before he can execute the swindle, Brown first practices his act in the car. Here is where Pelphrey really shines since he preps a variety of emotional manipulations in real-time. It’s interesting to watch pull off in the movie and practically identical to how an actor would prepare for a scene they have to shoot.

Being a con guy may initially seem to be no big deal, but we soon discover that he has amassed a lot of animosity. His mother Jeanne (Jacki Weaver) has learned the hard way not to take anything he says seriously. He swore to never lie to his sister Jamie (Shantel VanSanten), and she still believes him (even though he does). His brother David (Paul Schneider), is forced to lie to the authorities on his behalf. In addition to his family, he is being pursued by an FBI agent named Lance Leising (Ryan Philippe), and members of the criminal underworld that he owes a lot of money to. In fact, he needs to flee by the back door after pulling the pawn shop con in order to avoid being attacked by individuals who are after him.

American Murderer’s attempt to go into Brown’s past suffers from pacing issues. He had a fairly nasty father (Kevin Corrigan), whose absence is discussed in yet another flashback, as revealed in a sequence of flashbacks. He deceives Melanie (Idina Menzel), his real estate agent, who he begins dating as well. This appears to be an attempt in American Murderer to present a softer side of him, but all it shows is that despite this, he is still cunning and exploits everyone he encounters.

Brown understands he needs to raise his game and move on to more severe crimes when he finds himself in a tight spot and in need of money. He talks with fellow conman Kyle (Moisés Arias) and discusses the potential heist of an armored truck after they pick up money from a bank. This way he may have some breathing room and be free of his debts after his mother doesn’t buy his BS and won’t give him any money for his “sure thing” business concept. In the aftermath, Brown has turned into a full-fledged murderer and is now on the run from the local police as well as Agent Lance and the FBI. American Murderer demonstrates how his crimes affect those closest to him, even though we are aware that he still maintains his fugitive status because he is still at large in real life.

Tom Pelphrey really is outstanding in American Murderer. There’s a good reason people were pissed when he didn’t win an Emmy for Ozark, the man can act his butt off. When Brown is “rehearsing” his con, Pelphrey is stellar as he changes emotions at the drop of a hat. His scene where he cries on cue, then laughs at how quickly he can turn on the tears is a wonderfully acted scene. Unfortunately, Pelphrey is the only big highlight of American Murderer. The rest of the cast isn’t given much to work with and is just generally as supporting from the background. The time jumps didn’t work as they probably intended to. While the concept works in other films or TV shows, it just felt out of place and was distracting instead of illuminating. Without Pelphrey’s performance, the film would have suffered further.

Overall, the story of Jason Derek Brown might have been better served as a true crime documentary. That way, every aspect of Brown’s life could be explored (like he had an eerie resemblance to actor Sean Pen, so much that one of Penn’s body doubles was arrested in real life because they thought he was Brown. Jason Derek Brown’s life seems incredible, interesting, dramatic, and sad. Either in a different storytelling style or a more seasoned director, this could have been an incredible and instructional story.

American Murderer is currently in theaters and will release On Demand on October 28th.