Here’s a fun rumor that I think we all hope becomes reality. We learned at Comic-Con that 2025 will see the conclusion of The Multiverse Saga with two new films, Avengers: The Kang Dynasty, and Avengers: Secret Wars. Both are so close together it wouldn’t have been a shock if one director took them both on, but Shang-Chi’s Destin Daniel Cretton is only at the helm of the first. Now a new rumor from The Weekly Planet Podcast claims that Wakanda Forever‘s Ryan Coogler will direct Avengers: Secret Wars.

Coogler is rumored to be in talks to direct Secret Wars, which will conclude Phase 6 on November 7th 2025, just six months after The Kang Dynasty. 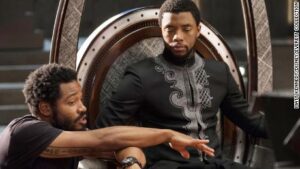 The popular assumption by fans was that the Russo Brothers would eventually come back to Marvel for the next big Avengers event, but they are far too busy directing and producing their own projects. Who knows if they’ll ever return?

If true, this is the logical next move for Coogler. He’s come a long way since Fruitvale Station, Creed, and even Black Panther. Each movie he’s directed has expanded in scope, budget, and studios have learned to put their faith in him. Hopefully, we’ll get an answer soon.