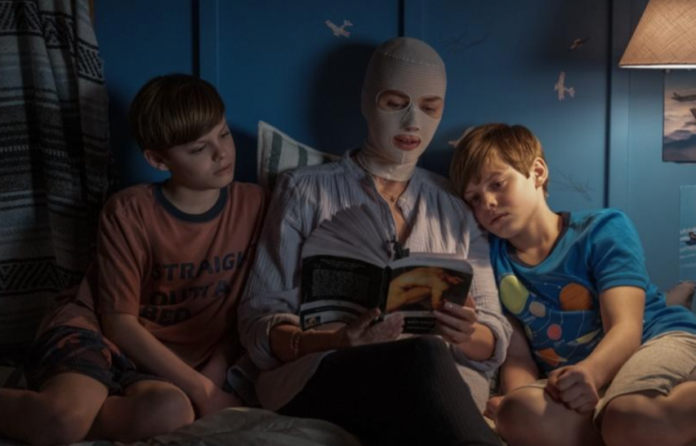 Matt Sobel had very big shoes to fill with his remake of 2016 Austrian horror, Goodnight Mommy. The original film is a masterful thriller that explores the challenges of motherhood and the weight one carries when struggling through grief. But for genre fans, it was a nifty twist on the “evil child” trope which also plays with one of our deepest fears, that kids can be inherently evil. Sobel’s take, which leans on the overwhelming talents of star Naomi Watts, is no less terrifying for prospective parents out there, although it struggles to find a voice all of its own.

The plot is basically the same. Cameron and Nicholas Crovetti play twin siblings Elias and Lucas, who are dropped off by their Father (Peter Hermann) at the home of their Mother (Watts), a formerly well-known actress. The boys are eager to spend time with her, but they are stunned into silence when they actually lay eyes on her. Her entire head is wrapped tight with bandages, her face covered in a mask that only reveals her eyes and lips. She looks horrifying, like an alien visiting Earth, or a character out of Almodovar’s The Skin I Live In.

Boys of Elias and Lucas’ age have overactive imaginations, and they are immediately suspicious. Mother isn’t acting like herself. This woman smokes, she’s angry all of the time, and worse, she’s dared to give the boys rules to follow and boundaries not to cross. How dare she? Who is this woman, and what has she done with their Mother?

Sobel and screenwriter Kyle Warren keep a firm grip on the mystery, while an ever-shifting power dynamic emerges within the isolated home. The boys are constantly testing the limits, as young children are wont to do, but when they get caught it causes the reaction from Mother that confirms their suspicions. But there’s also something genuinely up with her. In secret, she stares at herself in the mirror. Her movements are, to put it mildly, snakelike. She’s infatuated with her appearance, almost like she’s someone else. Or could the reason for this be something more innocent?

The original version of Goodnight Mommy was seen heavily through the eyes of the twins, who donned creepy masks and seemed at times to be completely removed of their humanity, a parent’s worse nightmare not understanding where they went wrong with their kids. It’s understandable that Sobel would want to put more attention on Mother when he’s got Watts in the role. She’s fantastic, painting a mysterious, complex picture of a woman who is many things at once, a totally foreign concept for a child to understand. The Crovettis don’t have the natural creep factor that their counterparts did, but they’re better at expressing Elias and Lucas’ confusion and making it feel genuine.

Goodnight Mommy also has the benefit of being just a little bit cheesy, as well, so it doesn’t get as heavy as it could have. Only a few supporting characters pop up, like a pair of cops in which one is a huge fan of Mother who can’t stop fanboying long enough to pay attention. Some of the punishments Mother inflicts on her children, and vice versa, are extremely uncomfortable to watch but escalate in an increasingly unbelievable fashion.

The final act escalates in an unexpectedly breakneck fashion, running completely counter to the slow build we had grown accustomed to. Every scream has more urgency, and every act of aggression is crueler, culminating in a devastating, well-hidden twist and a savage conclusion that hits you like a kick in the teeth. It’s somewhat less effective for those who know what’s coming,  and the imagery is less indelible, but Goodnight Mommy still packs quite an unnerving wallop.