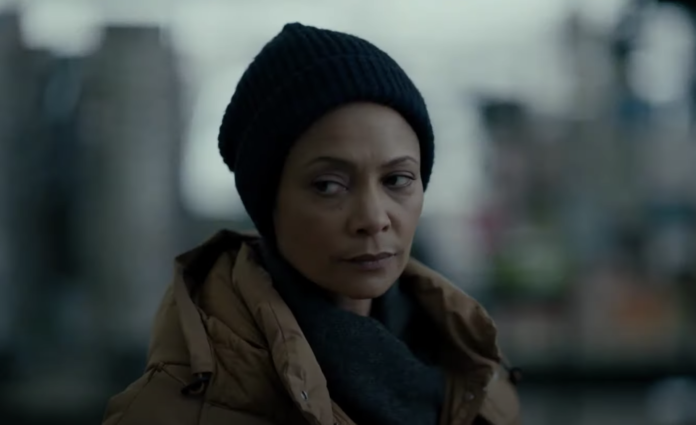 NOTE: This review was originally part of our Sundance Film Festival coverage.*

Race and class collide with tension as bitter as the Montana chill in Julian Higgins’ neo-Western, God’s Country. The film is a reimagining of the short story by James Lee Burke, which was about a white man in his 40s attempting to protect his land from trespassing hunters. But the dynamic gets flipped considerably when the protagonist is instead a liberal Black woman from New Orleans, played by Thandiwe Newton in the rare role she can really dig into.

Newton plays Sandra, who has been struggling since the recent death of her mother, who was tough to please and did not want to leave New Orleans for Montana. But Sandra has a university gig, and now a huge swath of pristine land to call her own. It’s a lonely existence, though, made worse by the racial dynamics that play out in front of her everywhere. The issue of Affirmative Action is hotly debated at work, while Sandra, a Black liberal in a nearly all-white deeply conservative state, is basically a pariah. When a pair of white hunters park their red truck on her land to go hunting, she writes a note asking for them not to. Do you think they heeded this isolated Black woman’s wishes? Of course not.

A call to the sheriff doesn’t make things any better, but to be fair, he’s pretty straight up about it. He tells her that calling the cops in a place like this doesn’t make anything better; shit will only escalate and he’s basically the only police in the entire town. In short: he can’t protect her, best to keep your head down.

“What is the point of you?”, Sandra asks. It’s a fair question, made starker by an encounter in which she and the sheriff are nearly chainsawed to death by the trespassers and their buddies.

The screenplay co-written by Higgins and Shaye Ogbonna creates terrific tension early on. The site of the red truck carries a certain menace; no overt threats need to be made. Sandra is in danger just going out for a jog in a place like this. And I quite like what the film highlights about the system’s inaction when it comes to racism and injustice. The impact is never isolated to just one victim, but it spreads like cancer. We see the silence extend not only to the police but to the faculty Sandra calls her colleagues.

Unfortunately, God’s Country can’t sustain this rising temperature for long, although it’s failure comes at the cost of making a larger point. Sandra is no innocent in all of this; the trauma of her recent tragedy, plus resentment from a previous event back in New Orleans, has made her self-destructive. She betrays those who are on her side and fights with those who say the right things but refuse to act. Worse, she often seeks out the confrontations that she ends up being angry about later.

On the one hand, I like that Sandra is an imperfect protagonist because she’s authentically complex. Newton, always so good at playing abrasive characters, is in every scene and digs deeper into this role than we’ve seen her do in a long time.

But it doesn’t make for great melodrama as Sandra and the trespassers escalate their dispute, with the film’s viewpoint about race relations in red states becoming about as bleak as it gets. There’s some lip service paid to the hardships also suffered by Sandra’s rivals, but it doesn’t amount to much. And why should it? God’s Country makes the case that things are so bad that doing what’s right only leads to more pain. It’s an interesting take that makes this film worth checking out, especially for Newton’s performance, but is also not the sort of thing you’ll be eager to watch again.

‘God’s Country’ Trailer: Thandiwe Newton Must Defend Her Land From All Sides In Julian Higgins’ Neo-Western