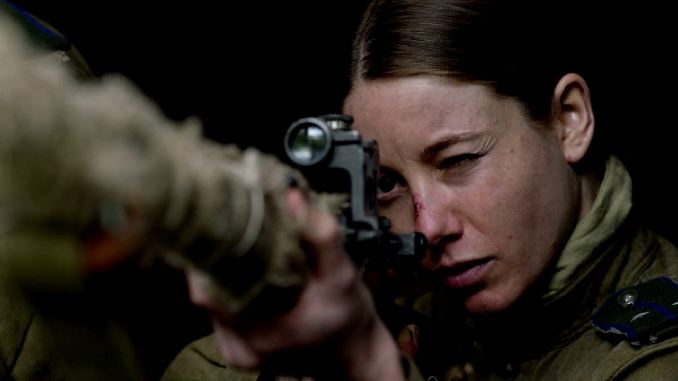 Is History written by the victors or remembered and recorded by those who survived it? The idea of the power of manipulating the message is at the center of Burial. There is a considerable influence in controlling a narrative. So much so that people risk their lives for it. Anna Marshall (Harriet Walter) saw this firsthand during the waning days of WWII. With the war a distant memory, she is now living in London in the early 90s. One night a neo-Nazi named Karl Edwards (David Alexander) breaks into her home. Unfazed, Anna was ready and quickly gets the upper hand. It turns out Karl has heard rumors of Anna’s exploits after WWII, where she served as a soviet officer. Rumors that had to do with a top-secret mission centered around Hitler’s remains. 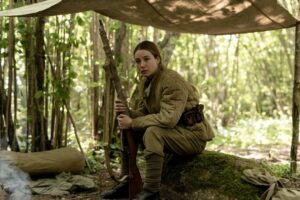 After drugging Karl, Anna takes the time to reminisce and tell the true story of her time after the war. Back to Berlin in 1945, when she was known as Brana Vasilyeva (Charlotte Vega). It turns out Karl wasn’t entirely wrong and that Brana was indeed part of a mission sent directly from Stalin. Her team was tasked with transporting a coffin-shaped box that looked so much like a coffin that it could have been a coffin. Granted no one knew for sure what was inside…until they looked. Turns out that the coffin-shaped box contained Hitler’s body. Brana, along with Tor (Barry Ward), Ilyasov (Dan Renton Skinner), and Iossif (Bill Milner) have to take the coffin past the Polish border to Pozna. From there they can board a train all the way back to Moscow. Sounds easy right? 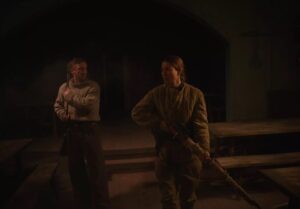 The only thing standing in their way is terrible weather and a long stretch of forest. A forest that is full of Nazi fanatics grasping on to Hitler’s rhetoric even after Germany lost the war. These Nazis were known as ‘werewolves.’ Wearing pelt and masks they burn lichen and mushrooms causing their enemies to hallucinate before they attack. With a stereotypical Nazi commanding officer, Wölfram Graeber (Kristjan Üksküla), hot on their tail – things are looking bleak. That’s when Lukasz (Tom Felton) and his wife Justyna (Ester Kuntu) come to the rescue. With the entire postwar message at stake, both sides will do whatever they can to get their hands on that box. 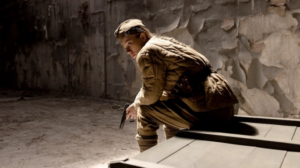 Burial is written and directed by Ben Parker. The film’s story is purely fictional but plays on the idea that history is not written in stone. Different stories, or legends, exist, changing people’s beliefs on what may or may not have happened. Parker consistently brings up the importance of messages and being able to control a narrative. Brana wants the world to know that Hitler was weak and now dead. Graeber however is desperate to keep the Nazi message strong – manipulating the truth to do so. 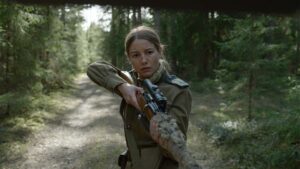 Where Burial is most successful is the atmosphere and some standout performances. The settings, costumes, and characters complement each other and help engage the audience. This results in Parker and his team successfully transporting the viewer back to war-torn Europe in the mid-40s. Albeit in a very dark (literally) period of time with multiple scenes being dimly lit. A bright spot in those dark scenes is Vega. She manages to salvage a relatively lackluster script. The script coupled with slow and melodic music and low lighting could have resulted in a snoozer. Yet Vega brings a certain energy to her role that helps push the film forward. While character development is slim and there is no shortage of nondescript soldiers rotating in and out, Vega manages to have you care for Brana. 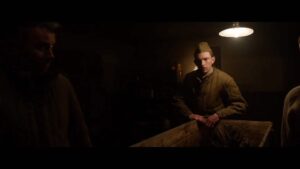 For a movie about soldiers deep in the woods of enemy territory getting hunted, Burial comes up short on thrills. There are some action scenes, but nothing novel or unique. It’s strange to say, but the whole time I wanted more from Burial, which would’ve been accomplished by doing less. The premise is interesting enough and the potential is certainly there, but the film never reaches it. Burial gets too bogged down and simply doesn’t set itself apart. Parker’s direction impresses more than his writing. He captures some interesting shots and displays a good eye. His portrayal of soldiers hallucinating was also noteworthy. However, when the dust settles, Burial is a mixed bag that leaves one wondering what the film could have been.