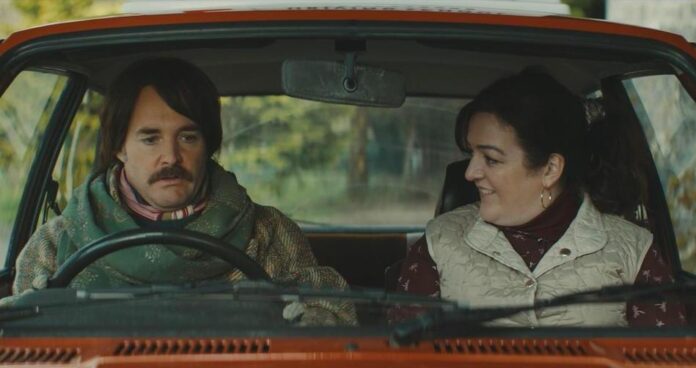 Extra Ordinary explores the world of ghosts all around us and those that have the ability to see and interact with them in a small Irish town. One of the lucky few is Rose Dooley (Maeve Higgins), a lonely driving instructor who has shelved her supernatural talents (known as ‘the talents’) of communicating with the dead after a horrible accident that killed her father, the “famed” ghost whisperer Vincent Dooley (Risteard Cooper). Rose blames herself for what happened to her father, which of course involves the paranormal, a dog, and a puddle – I’m sure just how you envisioned it.

The local townspeople know of Rose’s gifts and always try and enlist her help with small hauntings – trashcans, ghosts rummaging around the house, and the fryer at a local restaurant just to name a few – but she refuses to put anyone else in danger after her father’s death. That is until Martin Martin (Barry Ward), an equally lonely woodworker whose wife Bonnie passed away, is given an ultimatum by his daughter Sarah (Emma Coleman) that he needs to get Rose to vanquish Bonnie’s spirit or she will move out.

Rose initially refuses, but when Sarah falls under a spell of a satanic ritual Rose realizes that she must put aside all her fears and help Martin. What she doesn’t know is that the source of the spell is once famous one hit wonder artist Christian Winter (Will Forte) who has made a pact with the devil to deliver a virgin in exchange for his career to flourish once again. Christian and his wife Claudia (Claudia O’Doherty) live in a castle at the edge of town and are preparing the ritual for Sarah’s arrival during the blood moon. When Christian realizes that Rose has decided to help Martin, he must do whatever he can to make them fail so he can bring another hit single to the world.

Extra Ordinary tackles a blend of genres rarely seen – the mix of horror and romcom. Not only do writers/directors Mike Ahern and Enda Loughman step up to this challenge, but they knock it out of the park. Extra Ordinary is hilarious, but it is the type of subtle humor – the quick glances, the perfectly delivered dialogue, the ridiculous actions by the film’s stars – that are so successful. I can’t forget to mention all of the fantastic references to supernatural films of the past woven throughout Extra Ordinary, some obvious and others more elusive, but all appreciated.

Ahern and Loughman splice old footage of Vincent Dooley’s public access ghost television show with the film itself, a clever and humorous way to move the narrative along. They also employ unique scene transitions, camera shifts, and continuous shots – some little touches that help set Extra Ordinary apart. The relationships between Christian and Claudia as well as Martin and Rose are handled perfectly. All their interactions are hysterical, and the actors involved really seemed to be enjoying their roles. The cast and budget for this film are both small, but Extra Ordinary proves that you don’t need a big budget and hundreds of extras to deliver a truly quality product. Do yourself a favor and go see Extra Ordinary, It is a refreshing and original laugh-out-loud comedy and one that will not soon be forgotten.