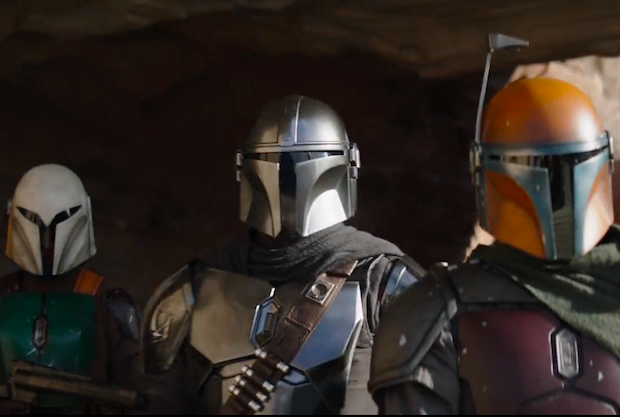 It’s been a long time coming, and there’s still some ways to go, but the first trailer for The Mandalorian season 3 was unveiled today at D23. And my goodness, Din and Grogu, the “clan of two”, are in way over their heads. After removing his helmet, Din is no longer considered a Mandalorian, but that doesn’t mean he’s out of Mandalorian trouble. Far from it.

Season two ended with Din handing over his Force-powered baby Yoda over to a young Luke Skywalker so he could be properly trained. That story beat was revered in ho-hum fashion in The Book of Boba Fett. Season 3 picks up where that left off. Grogu still needs to be trained, and Din finds himself up to his helmet in what looks to be a civil war in Mandalore, with Katee Sackhoff returning as Bo-Katan Kryze. We also see the return of Carl Weathers as Greef Karga, looking quite regal and powerful, and Amy Sedaris as fan-favorite junker Peli Motto.

There’s just something about the sight of multiple Mandalorians in heavy armor leaping or flying into battle that gets me super pumped up. It looks like this season will be devoted almost entirely to Mandalore, and the winning back of their homeworld. If that’s the case I’m all for it.

The Mandalorian season 3 will once again be headed up by Jon Favreau and Dave Filoni, and will hit Disney+ in 2023.