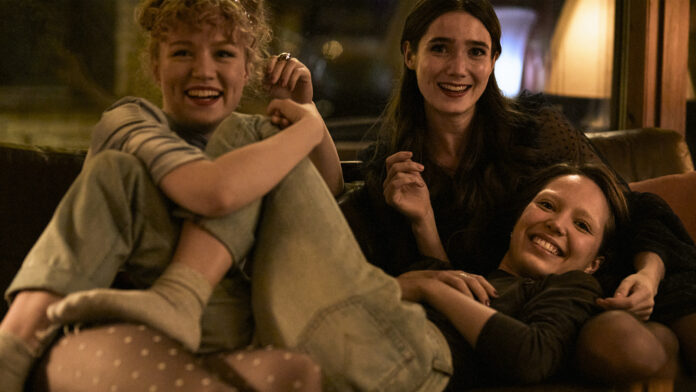 *NOTE: A version of this review was originally part of our Sundance Film Festival coverage.Girl Picture opens in theaters on August 12th.*

In Finnish director’s Alli Haapasalo’s newest film, we follow three girls over three separate Fridays as they navigate their young adulthood. It’s a fairly simple plot, if not overdone in recent years. But with a killer soundtrack and score overseen by Jan Forrström and three excellent performances from leads Aamu Milonoff, Eleonoora Kauhanen, and Linnea Leino, Girl Picture breathes new life into the coming of age narrative.

Though working off of “teenage girl archetypes,” Mimmi, Rönkkö, and Emma are anything but stereotypical. We are first introduced to the disaffected misfit Mimmi (Aamu Milonoff) in gym class where she verbally and almost physically faces off with a more popular classmate. She works with her sweet but desperate for an orgasm best friend Rönkkö (Eleonoora Kauhanen) at their local mall’s smooth stand. There the former starts bickering with Emma (Lineea Leino), the uptight devoted athlete, one competition away from a national figure skating championship.

Later at a party, Mimmi and Emma not only reconcile but discover a palpable attraction to each other, while Rönkkö is busy lusting after every boy she sees in hope of having sex. As we check in with each girl each Friday, we see the progress and regression of their relationships and desire.  This might not sound like new territory, but each actress is brilliant in their portrayal. Milonoff keeps all the emotion in her mouth, each smirk and slight frown, targeted and knowing. She plays off of Leino’s seriousness seamlessly. There’s a sparkle in Kauhanen’s eyes as she breaks away from her best friend and meets new people. It’s these girls’ performances and Haapasalo’s reverence for the characters that make Girl Picture worth watching.

Playing off that Haapasalo infuses empathy into every scene. As they make questionable choices or act irrationally, she doesn’t cast judgment. She takes them as they are, making her understanding of the age group evident. With a warm color pallet, Haapasalo creates a joyous portrait of young womanhood.

Nothing epitomizes these women more than the plucky guitar, ukulele, and piano instrumentals that fill the soundtrack, overseen by Jan Forsström. Mixed with Finnish and Western pop songs including Perfume Genius’ “Slip Away,” the song selection is heavy when it needs to be and lighter to highlight a teenager’s revelry. It plays off the acting almost like a dance.

Overall, what Haapasalo brings to Girl Picture as a director is cohesivity. Every shot isn’t the most innovative and the film’s concept is not anything new. But her attention to detail creates a bright and relatable representation of modern womanhood and in a world where those stories are still not taken seriously, that is more than enough.