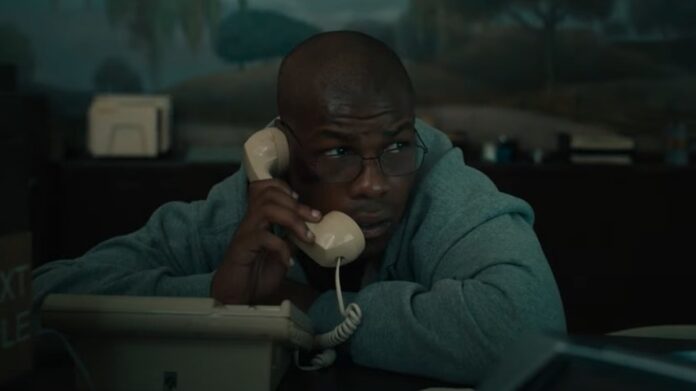 *NOTE: This review was originally part of our Sundance Film Festival coverage when the film was titled 892.*

It’s a story as old as this country’s existence. A soldier returns home from combat and finds that there’s nothing waiting for him. He fought for the country and the country didn’t have his back in return. In 2017, Lance Corporal Brian Brown-Easley walked into a Wells Fargo bank branch in Atlanta, bruised cheek on his face, wearing a grey hoodie, and claimed to be carrying a bomb. He wasn’t like other bank robbers. He let most of the people go with the exception of two, including the bank manager. While there was an opportunity to walk out with thousands of dollars, all Brian wanted was $892 taken from his disability check by Veteran Affairs.

Based on the Task & Purpose article by Aaron Gell, 892 is a well-intentioned, occasionally powerful look at the breakdown of multiple systems that led to Brian’s desperate act. Directed by Abi Damaris Corbin, the film hits you with evocative imagery that put you right in the middle of the action, but also strike at the emotional core of what Brian hoped to achieve. While it’s too much to call it a biography or a documentary effort, 892 is a cooly calcuated film up until the moment it isn’t, and only then do things begin to fall apart.

Any problems have nothing to do with the actors. John Boyega plays Brian Brown-Easley, a former Marine afflicted with PTSD and a host of other health issues. He has an estranged wife and a young daughter, Kiah (London Covington), who is his world. Brian doesn’t have much, but he knows what he’s owed and what little he has goes to his daughter. That’s what drives him into the bank that fateful day, where he remains holed up with bank teller Rosa (Selenis Leyva), and the manager, Estel Valerie (Nicole Beharie).

The performances are more compelling than the narrative, which remains too distant to truly captivate. Boyega, who took on the role following Jonathan Majors’ departure, doesn’t over-calibrate things by playing into Brian’s PTSD and paranoid tendencies. He’s volatile, but in a controlled manner; his frustration boils over when he feels lied to or misled. But he’s not crazy or unhinged. And that realization of who Brian is comes through in Rosa and Estel, as well, who are justifiably terrified but also cognizant of the situation. Beharie is such a terrifically expressive actor, she can get across Estel’s fear but also her understanding in a single look.

The late great Michael K. Williams, in one of his final roles, plays former Marine and police negotiator Eli Bernard, perhaps the one man standing between Brian and a trigger-happy force. He battles against his own bureaucratic headwinds much as local reporter Lisa Larson (Connie Britton) does. The two of them become sympathetic ears for Brian as he tries to get his story out, but the systems are broken everywhere. The media works with the cops, one eager for a bloodthirsty story and the other uncaring about Brian’s fate. But the screenplay doesn’t dig very deeply into these failed institutions. Flashbacks to Brian’s furious past encounters with the VA, and happy moments with Kiah, help to humanize him and lend authenticity to the hostage standoff. However, as the clock ticks down the film can’t help but give in to Inside Man-esque tropes of the genre, which are considerably less believable.

The film ends, rather abruptly and limply, in this weird space where it’s neither as tense as a thriller and not as well-constructed as a biography might have been. 892 is a solid effort, a peek into the many ways society can fail a man who risked all for his country, only to die for it when he didn’t have to.

‘R.I.P.D. 2: Rise Of The Damned’ Trailer: Jeffrey Donovan Stars As A Reborn Gunslinger In Prequel To 2013’s Flop