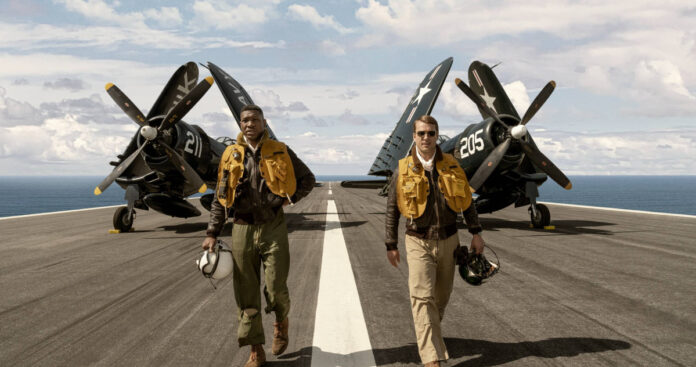 Glen Powell just can’t stay out of the air. After hot-dogging it opposite Tom Cruise in Top Gun: Maverick, Powell is taking to the skies once again with Devotion. Only this time, he’ll be flying alongside red-hot Lovecraft Country and Loki star, Jonathan Majors.

Set during the Korean War, Devotion centers on the real-life friendship between Naval aviator Jesse Brown (Majors), the first African-American to complete the Navy’s program, and pilot Tom Hudner (Powell). Hudner received the Medal of Honor for trying to save Brown’s life during the Battle of Chosin Reservoir in 1950.

Behind the camera is Sleight director JD Dillard, with a cast that includes Christina Jackson, Joe Jonas, Thomas Sadoski, and Serinda Swan as Elizabeth Taylor.

Devotion opens in theaters on November 23rd, following its world premiere at TIFF.

Jonathan Majors To Play Dennis Rodman In ’48 Hours In Vegas’