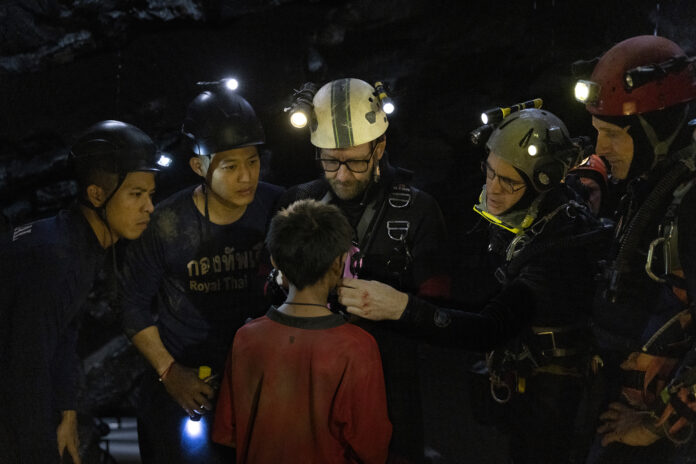 It feels good to have Ron Howard once again making feel-good movies. Yes, Thirteen Lives is about the 2018 rescue of twelve young soccer players and their coach from Tham Luang Nang Non cave in Thailand, and that in itself is a tragedy, but the display of community, togetherness, ingenuity, and compassion that came together to save them is the best of humanity. And I like Ron Howard movies that show the best humanity has to offer. Please, no more Hillbilly Elegy or even Solo. This is Howard right in his comfort zone.

Perhaps the best thing about Thirteen Lives is noticeable right away; this is a very stripped-down production and the film is better off for it. The story is simple, as it should be: we see the soccer team finishing up a practice and, in celebration of one’s birthday, the boys and their coach bike to their favorite cave to go exploring. However, shortly after arriving, monsoon season arrives earlier than expected. Before long, parents aroung this tight-knit little community, which have little but food, faith, and family to rely on, begin to worry. With the heavy rains, that cave can be counted on to flood each and every year. A statue of a sleeping princess out of the cave’s entrance is said to be very angry by the locals.

A story like this doesn’t need a lot of meat on the bone. It needs to feel authentic, like all of its pieces manifest into a believable whole. There are various story beats that come together to complete the picture of the massive operation that unfolds to rescue the team. The town’s governor was about to be dismissed from his job, but now he’s being kept in place in order to take the blame if the rescue mission is a failure.  There are the farmers who sacrifice their fields so that water from the cave has a place to be pumped out. Also, there’s the water expert and his dozens of volunteers who have done the painstaking work of finding sinkholes causing the cave to fill up with water. This is truly a story of sacrifice for the greater good.

There’s also plenty of star power. Viggo Mortensen, Colin Farrell, and Joel Edgerton play Richard Stanton, John Volanthen, and Richard Harris, a trio of British divers who, reluctantly at first, push themselves to the mental and physical limit as part of the rescue effort. This is a ticking clock of a movie, where the options diminish with every passing moment. If the cave waters get too deep, the boys drown. If the water current is too strong, the divers can’t reach them. If the oxygen levels inside the cave get too low, they boys die. Conflicts between the Thai naval team and the British outsiders is there just to add a bit of tension but it doesn’t seem to be a major factor.

From the start, Thirteen Lives grips you and doesn’t let go. Of course, such a daring rescue attempt is going to be compelling, but to be so when you already know the outcome is evidence of how good Howard is at this kind of material. Even though the story made national headlines and the result is never in doubt, you find yourself drawn in by the sheer daunting obstacles that must be overcome. But more than that, the people are individually complex and fascinating. Mortensen’s Richard Stanton is a stodgy old Brit who, when first asked to join the rescue, grumbles “I don’t even like kids.” He eventually sheds the cold exterior and becomes the lead in mounting the effort. Farrell’s John Volanthen is the most hopeful, which in such a dire scenario is dangerous in and of itself. And Edgerton’s Richard Harris balks when his skills as an anesthetist are requested for a dangerous task.

As someone who is claustrophobic and deathly afraid of deep water, Thai cinematographer Sayombhu Mukdeeprom had me in chills with the way he captured the cave’s conditions. With waters raging, the camera weaves and bobs through and impossible corners, putting you right there in the pure desperation of each moment. But you can also see his deep love of the area in the quieter moments, offering a light touch in moments where the townsfolk are coming together to support one another in this time of crisis.

In less skillful hands than Howard’s, Thirteen Lives would have steered its audience like a raging river current from one dramatic beat to the next. Howard, along with composer Benjamin Wallfisch, refuse to drown the emotional moments with too much sentiment. And that makes the fruits of this true international labor of love, this triumph of human will, all the sweeter. 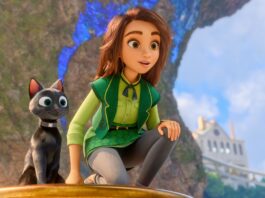 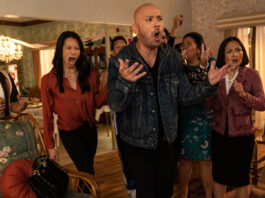 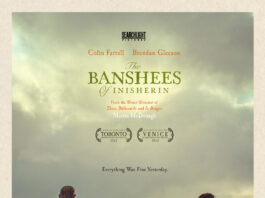 ‘The Banshees Of Inisherin’ Trailer And Poster: Colin Farrell And Brendan...