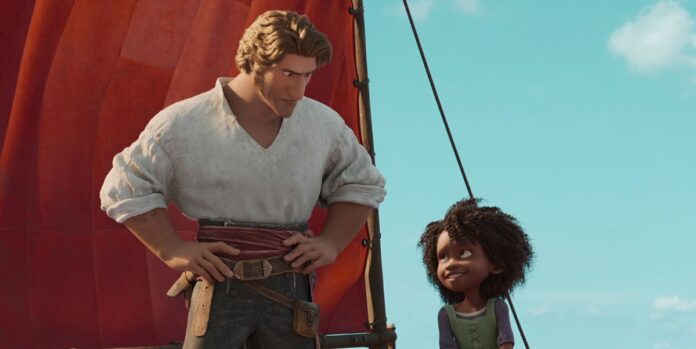 Sometimes it feels like Netflix is throwing darts at a dartboard, but they’ve hit on something really good with Sony Pictures Imageworks. The studio has already delivered stellar animated films such as Over the Moon, The Mitchells vs. the Machines, and now a potential blockbuster-esque franchise with The Sea Beast. An epic seafaring adventure set in a world where giant sea monsters and monster hunters clash, it packs tons of kid-friendly exploits, impressive nautical battles, and a surprisingly thoughtful message about doing what’s right and breaking bad traditions. Unfortunately, this ship can’t outrace that all-too-familiar feeling that it’s been stitched together with pieces from more-established vessels.

The Sea Beast takes place in a fictional land where the seas are dominated by fearsome creatures. The history books say the beasts have been terrorizing coastal towns for centuries, only to be defeated by brave monster hunters who are treated like heroes and gods among men. One of those most idolized is Jacob Holland (Karl Urban), first mate and adopted son to Captain Crow (Jared Harris) of “The Inevitable”, the top hunting ship on the high seas. But the time of the hunters might be coming to an end, just as the pirates faced the end of their time. The King and Queen have decided to stop paying the hunters and bring the task of killing sea beasts in-house, under the control of the Royal Fleet. Faced with losing their livelihood, Crow and Jacob agree to capture the most elusive beast of all, the Red Bluster.

While this might sound like the cartoon version of Master & Commander, it’s actually more of a seafaring buddy comedy. The highlight of which is Maisie Brumble (Zaris-Angel Hator), a young Black orphan girl with swagger and rebellious spirit in spades. Her entire family had died “heroes” on the most famous monster-hunting vessel of all, the Monarch, and now Maisie wants to live a life like them and the legends she’s read about in books. After failing to win passage about The Inevitable during the crew’s drunken bar crawl, Maisie decides to take the easy route and simply stow away.

Maisie is a real treat, and as fearless as any hunter. But she’s also got the insight and perspective that comes from youth. One moment she can be swept up in the life of a hunter and the idea of dying like a hero against a terrible sea beast; in the next she’s figuring out that maybe these creatures aren’t the real enemy. This change-of-heart comes with their encounter with the Red Bluster, which turns out not to be just some simple beast wreaking havoc. But can Maisie convince Jacob of this? And if she can do that, what chance do they have of changing the entire monster hunter way of life before it’s too late?

Sound familiar? Comparisons to How to Train Your Dragon are everywhere, both thematically and visually. The Red Bluster even sorta looks like Toothless in a way, and its relationship to Maisie and Jacob follows along the same path. Story beats are somewhat predictable as a result, making you wish the screenplay could be as clever and original as the characters. Veteran animator Chris Williams (Big Hero 6, Moana) fills the screen with a diverse array of hunters, heroes, and scallywags. There are no shortage of women on the The Inevitable crew (although all of the adult women are weirdly drawn to look nearly identical), including the badass Sarah Sharpe (Marianne Jean-Baptiste), a Black peg-legged fighter whose scowl is as deadly as her pistol.

Visually, The Sea Beast captures the vast scope of the endless oceans, making this something that demands to be seen on the big screen if possible. Naval battles are brisk and exciting, with dozens of cannons firing in all directions, and the occasional swashbuckling sword battle on the ship’s deck. The story does go adrift for a while as Maisie and Jacob figure their way out of a sticky predicament with Red (the Bluster’s pet name), but picks up when there’s a threat they might all be sent to Davy Jones’ Locker.  While most of this is kept light-hearted, with harpoons and clashing swords producing zero blood, deeper themes offer something for adults to latch on to. There’s a dark side to all of the monster-hunting heroism, and the film introduces the idea of a powerful elite getting rich through deception of the working class, and the destruction of the natural environment.  Kids probably won’t care about that part, though. However, they’ll understand Maisie’s championing of the beasts and her attempt at breaking the cycle of violence. The Sea Beast could’ve done more to set itself apart, but there’s no denying its memorable characters, timely message, and stem-to-stern action that could the launch of much bigger things to come.

The Sea Beast is available on Netflix now.