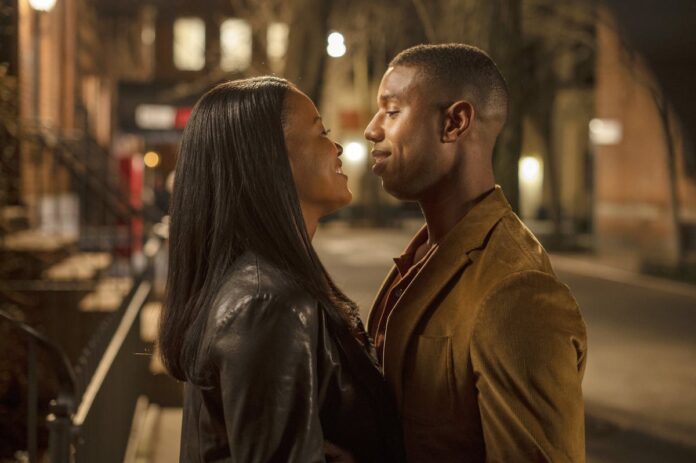 Family. Integrity. Love. If you’ve seen Denzel Washington speak, whether in person or on Youtube, you know the virtues the Oscar winner prides himself on. His latest directorial effort is an extension of those beliefs. In A Journal For Jordan, Washington stays behind the camera and instead enlists the help of actors Michael B. Jordan, Chanté Adams, and Mudbound writer Virgil Williams to tell the true story of 1st Sergeant Charles Monroe King and the journal he wrote for his son while serving in his country.

What is supposed to be a love story starts with reporter Dana Canedy (Adams) struggling to raise her one-year-old son, Jordan, alone. As she goes through difficult motherhood moments solo, she starts writing letters to Jordan about his father, Sergeant Charles King (Michael B. Jordan). Through flashbacks, we witness the ups and downs of their relationship and discover King wrote his own lessons for his son to follow.

Despite taking place in the late 90s and early 00s up until the present day, the entire film feels outdated. Shots seem to come out of a 90s drama. Not only does the dialogue feel corny, but some of the characters border on stereotype. At times Dana is presented as the “difficult Black woman” while Charles is a saint. All of her friends are white, which feels unrealistic for a Black woman living in New York City. One such friend, who is gay, is given stereotypical dialogue that feels inauthentic. The chemistry is not there between Jordan and Adams which makes the cheesy more apparent.

If you read up on Canedy, you will find that she was an accomplished New York Times writer and editor who won the Nobel Prize while her fiance was still alive. That milestone is completely negated from the film, which would have been understandable if her career was not set up as a large part of the character’s life in its beginning. What Washington and Williams struggle with is figuring out what is needed to tell this story. A large portion of Charles and Dana’s courtship is spent talking about the former’s daughter who lived with his ex-wife. However, she is never brought up by them, let alone seen even when Jordan brings her up to his mother. It’s little moments like this, combined with cliché dialogue that leaves the script lacking.

We’ve seen Michael B Jordan and Chanté Adams give compelling and romantic performances in Creed and The Photograph. We know Denzel Washington can direct from Fences and Antwone Fisher. Heck, Virgil Willams’ script for Mudbound was Oscar-nominated. All the ingredients are onscreen for a moving and effective story. However –for whatever reason, be it over-sentimentality or lack of chemistry and authenticity – A Journal for Jordan isn’t the love story it thinks it is.

A Journal for Jordan hits theaters Christmas Day. Watch the trailer below.