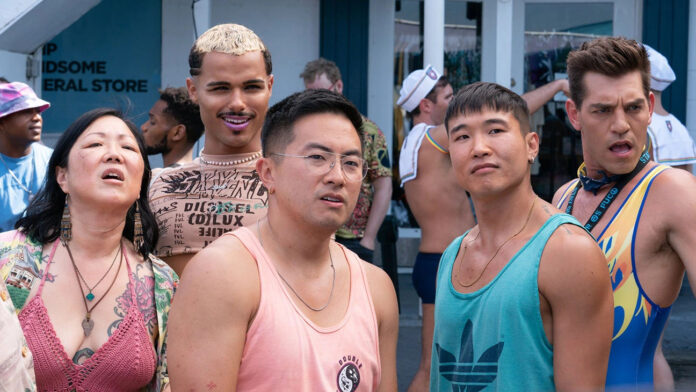 It is a truth universally acknowledged that the film industry has typically sidelined Asian and gay characters and creators. Often their stories are reserved for television, where they are given more screentime to flesh out their stories. On the silver screen, there is still a long way to go in terms of  Asian leads. For gay characters, they are often reduced to comic relief, unless given some tragic traumatic leading role. That’s why Fire Island is so joyously invigorating. A modern retelling of Pride and Prejudice that takes place at the epicenter of queer summer culture, the film not only breaks barriers but is the perfect romp for the season.

Star and screenwriter Joel Kim Booster embodies the Lizzie Bennet archetype as Noah. Broke and afraid of losing the traditions of his tight-knit friend group, we meet him right as she heads to the Mecca for queer vacation, Fire Island. Joining him are besties Luke and Keegan (Matt Rogers and Tomas Matos in the Lydia and Kitty Bennet roles), reserved Max (Torian Miller representing the bookworm Mary Bennet), and Noah’s best friend Howie (a surprisingly sweet Bowen Yang in the Jane Bennet position) as they spend another summer at their friend Erin’s home, (Margaret Cho, i.e. Mrs. Bennet) who is banned from the lesbian part of the island.

They come across their Mr. Bingley and Mr. Darcy counterparts at a bar and then are quickly invited to spend the evening at their lavish summer home. Immediately, the class divide is clear when Noah hears Will (Conrad Ricamora as the Mr. Darcy type) tell Charlie (James Scully in the Bingley role) that he can do better than Howie. This sets off the events we’ve all become familiar with in Austen’s story.

Early on in Fire Island, Joel Kim Booster’s Noah says that for the week that they are on vacation, he and his friends don’t interact with a single straight person. Neither does the audience for its one-hour and 45-minute runtime. It’s absolutely refreshing. Both Andrew Ahn and Joel Kim Booster feel no obligation to appeal to a straight white audience. Instead, they let the Pride and Prejudice storyline do that for them.

As far as Austen adaptations go, Fire Island is one of the best. On par with Clueless, Booster’s snappy and witty dialogue never feels forced. Easily (and unsurprisingly) one of the funniest films released so far this year, Fire Island balances humor and angst brilliantly. The updates from the book are smart and calculated, made to be both queer and modern. The script is not without its hangups. Booster employs voiceover throughout the film, which feels redundant and trite. It can be jarring, considering how clever the banter is.

Director Andrew Ahn’s previous film Driveways was a much more quiet film about the Asian American experience. Here, he captures the same amount of heart and endearing truth as his previous work but is clearly having a lot more fun pulling it off.

Bowen Yang is so charming and sweet as Howie, leaving the biting humor he is known for on Saturday Night Live to Booster. Ricamora is everything you want a Darcy to be: broody and sincere with mournful looks and can rock the hell out of some khaki shorts.

Later this summer, comedian Billy Eichner is teaming up with Forgetting Sarah Marshall and Neighbors director Nicholas Stoller for Bros, the first gay romantic comedy from a major studio. (Bowen Yang appears in Bros as well.) Inevitably, it will be endlessly compared to Fire Island by critics, industry professionals, and more importantly studio heads. As more and more diverse demographics get in front and behind the camera, it’s vital to let their stories speak for themselves. If Marvel can have three feature films come out in one year, then give the gays more than one rom-com.

Fire Island is available on Hulu Friday, June 3. Watch the trailer below.