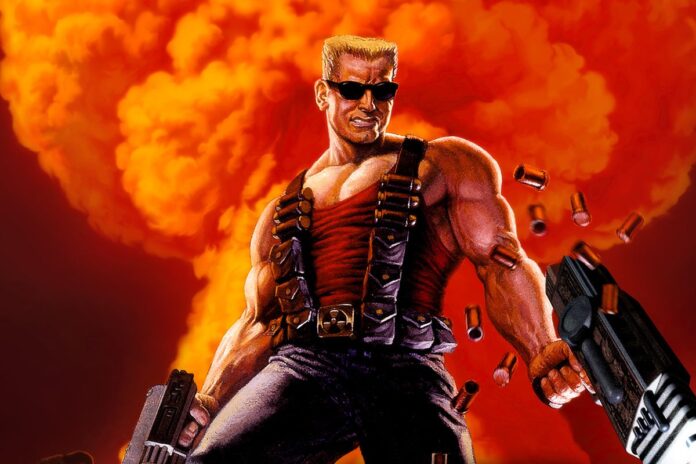 Duke Nukem. Just the name sends me hurtling back to the early ’90s and the waves of action shoot ’em games that were beginning to dominate the market. Because Duke Nukem was inspired by ’80s action movies, an actual live-action film was set in motion multiple times but could never get off the ground. But now Legendary is taking their shot at it, and considering the successful video game movies we’ve seen of late, this one has a real chance at happening.

THR reports Legendary has set the team behind Karate Kid spinoff series Cobra Kai to develop a live-action Duke Nukem movie. That team consists of Josh Heald, Jon Hurwitz, and Hayden Schlossberg, who obviously have a feel for the kind of nostalgia that Duke Nukem invokes.

Duke Nuke is basically a parody of action stars such as Sylvester Stallone, Arnold Schwarzenegger, Bruce Willis, and Bruce Campbell. With a variety of big guns and other weapons he battles a megalomaniacal villain set on ruling the world, or an alien invasion in Los Angeles, with major set pieces set in strip clubs, movie sets, etc. It’s all really silly and Nukem a pretty ridiculous over-the-top tough guy hero.

Back in 2018, John Cena was actually attached to play Duke Nukem in a movie set up at Paramount. Obviously, it didn’t happen and Cena’s career has really skyrocketed since. Whether he could be asked to return is up in the air. He’ll probably need to see a script first, and right now there is no writer or director attached.