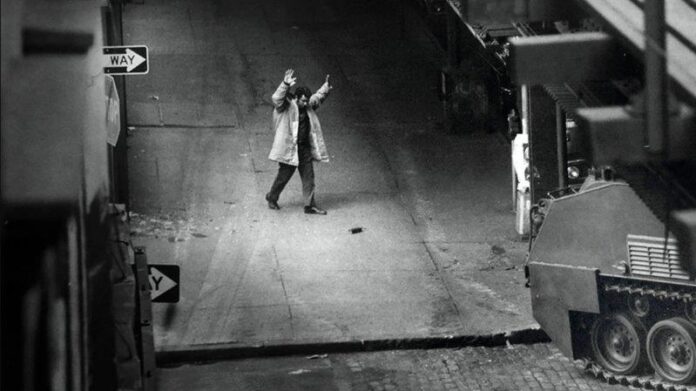 Nowadays when we think of a hostage situation, a negotiator is always the most important person on the scene. Depending on how skilled the negotiator is, they can save endless lives, even the culprits. Almost every action movie has a hostage negotiator as part of the final act’s ensemble. Hell, Samuel L. Jackson and a less creepy Kevin Spacey went tit-for-tat in The Negotiator as dueling negotiators. We have pretty much been raised for a generation and some changed with the idea of a hopeful peaceful resolution to an explosive hostage situation by the efforts of a skilled negotiator. However, that always wasn’t the case in this country. Back in the day, the police would tell a hostage-taker they have a certain timeframe to surrender, and if they didn’t the police would go medieval on them. That all changed in 1973 during an intense hostage situation in Brooklyn, NY that lasted for 47 hours and is illustrated brilliantly in Stefan Forbes’ latest documentary Hold Your Fire.

Four young black Sunni Muslim Americans (Shuaib Raheem, Salih Abdullah, Dawud Rahman, and Yusef Almussidig) went into a gun store for the purpose of robbing the store. However, things quickly got out of hand. Someone called the police as the robbery was going down, and the young men immediately panicked and took everyone who was in the store hostage. Remember, this is the 1970s, black militancy was high, and the police were still trigger happy when it comes to suspects of color (some things still don’t change), so this was a powder keg waiting to explode. In the aftermath of the Attica prison riots and the Munich Olympics, it was only a matter of time before hostage-taking became a little more mainstream, and the cops were ready to shut it down by any means necessary. After multiple shootouts, one member of the group was shot, and a police officer was killed. Over the next 47 hours, policing in America was forever changed, as were the lives of the hostage-takers as well as the hostages.

Hold Your Fire provides archival footage from that day as well as present-day interviews of those affected by it. Director Stefan Forbes interviews hostages, the hostage-takers who are still alive, as well as some police officers who were there that day. There is a weird Rashomon effect going on throughout the documentary as the police have one version of the events, and the hostage-takers and hostages have a different take. The film provides a historical account of how the police acted during that time (as well as displays that some things haven’t changed), as well as provides the real reason the four young men went to rob a gun store. They weren’t going for some black militant campaign of terrorism as it was described in the media during that time, they instead were trying to protect themselves because as Sunni black Muslims, they had a problem with how the Nation of Islam carried themselves. This led to confrontations between their small group and the massive Nation of Islam. They wanted guns because they were in fear for their lives and the lives of their families. However, on that fateful January night, they made a poor choice, which caused NYC’s most tense situation at the time. The firsthand accounts from everyone involved were raw and incredibly beneficial to understanding how motivations can lead people down a wrong path.

But the MVP of this story is Harvey Schlossberg. Schlossberg managed to also be interviewed for Hold Your Fire before he passed away this past May. Schlossberg was in the NYPD, but unlike most other cops, he had a doctorate in psychology and wasn’t of the “shoot first, ask questions later” mindset. He thought the best idea would be to simply talk with the hostage-takers. If someone was talking or at least at the negotiating table, they wouldn’t be so hard-pressed to get escalated and kill anyone. Now the simple idea of talking to diffuse a situation was radical at the time when the NYPD was used to simply going guns blazing and hoping they didn’t hit the hostages (the surviving hostages even said some of the shootouts during the incident were indiscriminate). But it was Schlossberg who had the fortitude to “keep them talking” even after the hostages managed to free themselves because he was of the mindset that the police should aim to not lose one life. As a result, his philosophy became the norm for not only how the NYPD handles these types of situations, but he transformed policing across America. He became known as the “father of modern police psychology.” He coined the term “Stockholm Syndrome,” something that the hostages exhibited even decades later after the event.

In addition to directing, Forbes does the cinematogrphy, and editing. He doesn’t involve himself in the story so much and really lets his interview subjects help frame the story as best they can. Hold Your Fire is a very compelling film as it sheds a light on an event that has impacted how this country handles difficult situations, but no one really knows about the event that kickstarted a change in how the police operate. Not only does the film give us a trip through a little-known American history event, but it also displays how some of the themes (racism, over-policing, and locking up black men) that transpired during that time are still as relevant today as they were in 1973.

Hold Your Fire is currently playing in select theaters and On-Demand.