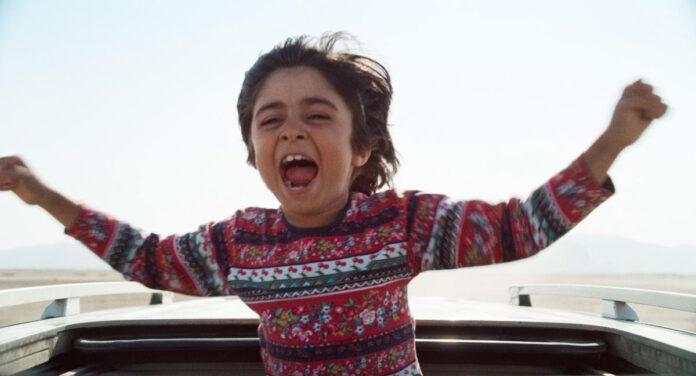 Kino Lorber is pleased to present Hit The Road, a touching family drama from Iranian writer/director Panah Panahi. Panahi’s father, Jafar, who is considered an icon of the Iranian New Wave despite his 2010 banishment from making films in Iran.  Panah’s father has continued to create cinematic artistry like 2011’s wily piece, This is Not A Film. The Iranian New Wave (also known as the New Iranian Cinema or Persian New Wave) refers to a modernized movement in Iranian cinema that began in the 1970s. Growing out of earlier Iranian film movements, including Neorealism, Iranian Realism and Poetic Realism. This most recent movement continued into the 1990s.

The apple clearly did not fall far from the tree as Panah’s shared rebellion calls out the criticisms of Iran’s domestic policies with the discussions and disagreements of a family on a mysterious road trip. The family of four includes a middle aged father who’s bound in a leg cast (Hassan Madjooni), a loving mother who’s on the verge of “losing her shit” (Pantea Panahiha), and two sons with a spacious age gap between them. One of them is a quiet young man who is clearly grappling with internal conflict (Amin Siminar) and the other a rambunctious and energetic 6-year-old (Rayan Sarlak) . A heavy sense of fear and despair looms over them the closer they get to their destination. The majority of their journey together has been cramped inside a borrowed vehicle abutted with claustrophobic intimacy.

Co-writer and co-editor of his renowned father Jafar Panahi’s acclaimed feature 3 Faces and former assistant to Abbas Kiarostami, Panah Panahi makes a hell of a debut with this deeply emotional and complex drama. Hit The Road follows a family of four as they drive across the Iranian countryside to meet a friend who appears to be a beacon of hope for them. Over the course of the trip, they bond over memories of the past, grapple with fears of an unknown future and fret over their terminally ill dog, Jessy. Panahi keeps the focus on the psychological and emotional dynamics inside the car and at various stops along the way.

The film gradually builds momentum as its dry undertone reveals the furtive purpose of their journey and dexterously swings from a dry comedy to tragedy en route. Although, in a sense, you’ll feel as if you’re right alongside the family and know that something is going down but there’s no backstory or acknowledgement of the full details that surround them. Fantastic acting, great use of imagery and cinematography and the dialogue is spot on and all too comfortably familiar to me as my husband’s family is also, mostly Iraninan.

There’s a scene where the mother and older son are talking at one of their stops and she asks him what his favorite movie is. He mentions 2001: A Space Odyssey because he is entranced with the idea of being alone in a rocketship traveling in a sea of space and stars which compares to as a total zen. A later scene has the father laying on the ground in a thermal suit that resembles an astronaut and the younger son is laying on top of him. They both stare at the sky talking about happy things and the ground beneath them fades away into that very image described earlier by the older brother. Brilliant. I absolutely loved it.

Hit The Road is an unexpected surprise of culture and circumstance that beautifully displays raw emotion and turmoil of a family conflicted with processing their current state of wellbeing. I am more familiar with traditional Iranian films however, I am thoroughly impressed and highly recommend watching this film adaptation of New Iraninan Cinema.